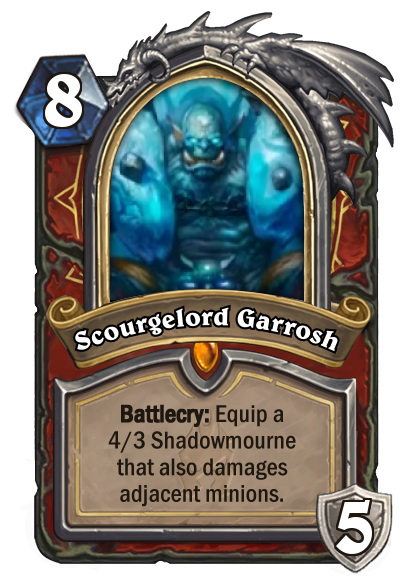 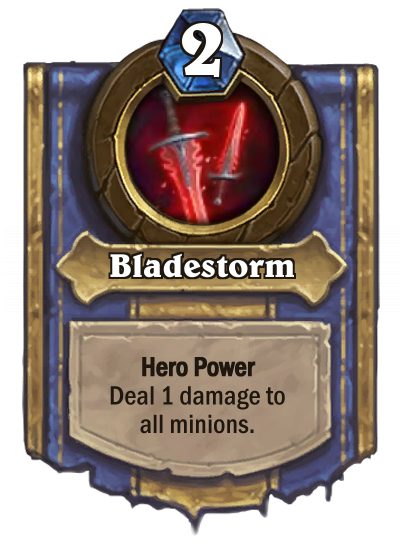 Those that have followed the Knights of the Frozen Throne card reveals to this point may have noticed that the Warrior's cards have mostly revolved around their minions taking damage or being damaged. This is that mechanic taken to its ultimate conclusion, with Scourgelord Garrosh and a Hero Power that offers... er... a more expensive Whirlwind effect. Okay, that part doesn't sound so great. But hey, it's one per turn, instead of just two spells, so that's something!

The Warrior's Shadowmourne weapon is an intriguing piece of work, as it deals four damage to its target and its two adjacent minions. It goes a long way towards clearing the board, assuming the weapon doesn't get wiped out by an Ooze or Harrison Jones.

A large chunk of the Warrior's new and existing cards will love Scourgelord Garrosh's new Hero Power. From this expansion alone, he's set to receive Val'kyr Soulclaimer and Rotface. Add that to Acolyte of Pain, Armorsmith, Frothing Berserker, Grommash Hellscream, King Mosh, and pretty much any Enrage minion and there are an ample amount of uses for this Hero Power.

The question becomes, is this Death Knight a better strategy than simply going Quest Warrior? The two decks cannot really co-exist, given that they both offer their own weapons and Hero Powers.

It's really tough to argue that anything is better than a Ragnaros Hero Power and trading that in for a Whirlwind sounds plain foolish on paper. The answer to this question ultimately depends on the style of play the Warrior is looking to play. Personally, putting up a wall of Taunts sounds like the superior strategy. That especially becomes true with the addition of the new Lich King Legendary, which offers an incredibly powerful effect on top of an 8/8 Taunt.

With that said, there are certainly ways to take advantage of this Death Knight. The weapon is a key component, so be sure to keep some Upgrade spells or even a Captain Greenskin around.

When playing against a Death Knight Hero with endless Whirlwinds, the idea quickly becomes to fight fire with fire. Play minions like Gurubashi Berserker, Hogger, Doom of Elwynn, or your own Enrage minions to make him think twice about activating that Hero Power.

Keep up the defenses with Taunt, especially since any Scourgelord Garrosh deck will assuredly have Grommash Hellscream handy. Clear the board with area-of-effect spells whenever necessary and go for the kill whenever an opening presents itself. Do not wait for the Warrior to run out of resources, because he'll easily be able to replenish them with the new Dead Man's Hand spell. Don't take this Death Knight lightly, but also realize that it's going to be far from the most daunting matchup in the game.

There's only one more Death Knight left! Look for our Warlock analysis later today. Also, be on the lookout for Shacknews' analysis on the rest of the expansion's cards over the next couple of days.