Blizzard is continuing Death Knight Hero week. As promised, the creators of Hearthstone have begun unveiling the remainder of the Hero Cards for the card game's upcoming Knights of the Frozen Throne expansion, which is now set to release on August 10.

Today's card reveal comes from Hearthstone Principal Game Designer Mike Donais, who popped up on Twitch's Omni Slash stream, hosted by Dan "Frodan" Chou, Brian Kibler, and James "Firebat" Kostesich. And given Mr. Kibler's involvement, it shouldn't be too surprising that today's reveal was for the Death Knight Priest. 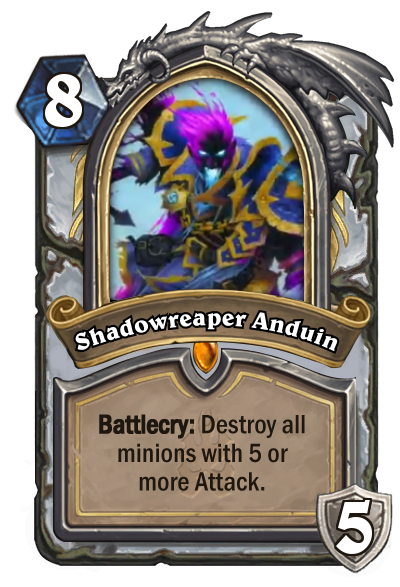 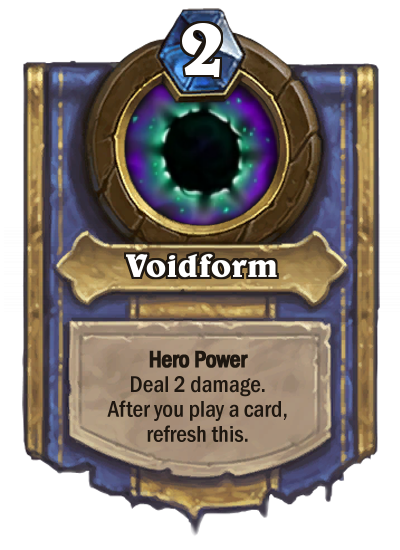 It's the Shadow Priest archetype taken to its logical conclusion. Anduin is here to wreck face, with a Battlecry that has the potential to wipe the board of a chunk of late-game minions. As if this expansion hasn't already wreaked enough havoc on the poor Jade Druid.

Aside from making buffed-up minions cry, Shadowreaper Anduin's most delicious appeal is his new Hero Power. It's basically Shadowform crossed with a much better Auctionmaster Beardo effect. Intrepid Priest players have already experimented with one-turk kill Beardo decks and it's easy to imagine those same players rushing to get back in the lab to see wha they can pull of with Shadowreaper Anduin.

This is another Death Knight that's mostly dependent on his resources, but if things go the right way, it may not matter. Under the right circumstances, Shadowreaper Anduin might need only one turn to polish off opponents, especially if he's got the aid of minions like Radiant Elemental and Shadow Visions on-hand. Plus, Lyra the Sunshard is practically a resource factory on its own.

Highlander deck players rejoice! Shadowreaper Anduin is made for this deck type, because a Turn 8 Death Knight play followed by a Turn 9 Raza the Chained will mean this refreshable Hero Power becomes free to use. It also makes Kazakus worth playing again, since he can help accelerate the card, refresh the Hero Power, or refresh resources, depending on the circumstance.

Speaking of resources, Shadowreaper Anduin can definitely play the long game, especially if Quest Priests manage to get Amara, Warden of Hope onto the board. Look for the early meta to experiment with the Highlander Quest Priest to see just how much they can get away with, especially with the influx of Deathrattle minions in this expansion.

But how about that one-turn kill scenario talked about earlier? Well, a pair of Radiant Elementals reduces the cost of Shadow Visions to zero, which means Priests can keep re-discovering Shadow Visions over and over while repeatedly refreshing their Hero Power. It's death by a thousand cuts, no less effective than the typical one-turn kill Quest Mage, but only slightly slower.

The seeming plus side of Shadowreaper Anduin's presence is that he loses his Hero Power healing, so make sure to deal with any Priest of the Feast that may show up. Expect that minion to be a big part of any Shadowreaper Anduin deck.

But even without his healing, Shadowreaper Anduin is going to dish out some pain, especially given how easy it can be to complete the Un'Goro quest and whip out Amara for 40 HP. Alexstrasza becomes more of a key in this matchup than ever, because an ill-timed Alex can get wiped out by the Shadowreaper Anduin Battlecry and give the Priest an additional 5 Armor before he simply brings out Amara for an HP refresh. Alex must be used as a last resort and only after the Death Knight is played. Even if Amara comes out, at least the 8/8 body will be intact.

The other strategy against the Death Knight Priest is to play around the Battlecry. The number of minions out there with less than 5 Attack are plentiful. In fact, the average N'Zoth, the Corruptor play should bring back numerous low-Attack minions with effective Deathrattles.

The best strategy is to take advantage of how slow the Death Knight Priest play, which means the answer once again becomes zoos and lots of them. Druids, Hunters, and Shamans should be able to overwhelm Priests with their sheer numbers, potentially finishing the game early. Even if Shadowreaper Anduin manages to come out, these zoos should have enough low-Attack minions to get around the Battlecry, setting up for a finishing Bloodlust or Savage Roar. Hit him hard and hit him fast!

The rest of the Death Knights are coming! With the big expansion set to drop on the 10th, the Warlock, Paladin, Warrior and Druid reveals are imminent. Also, be on the lookout for analysis on the rest of the expansion's cards over the next couple of weeks... ahem... next six days.