Hearthstone: Knights of the Frozen Throne - Analyzing Valeera the Hollow

Blizzard has kicked off Death Knight Hero week and, as promised, the creators of Hearthstone have begun unveiling the remainder of the Hero Cards for the card game's upcoming Knights of the Frozen Throne expansion.

Shacknews: One last question, knowing that there aren't any card reveals until July 24, without spoiling anything, what specific Hero card should players be on the lookout for? What do you think is going to excite the community the most?

So with that in mind, let's look at the Rogue's new Hero Card. With the play of this card, Valeera transforms into Valeera the Hollow. Shacknews is stepping out of the shadows in order to take a deeper dive into this latest class, looking at its synergies, viability, and damage potential.

Let's look at Valeera the Hollow and see what players can pull off with this new-look Rogue. 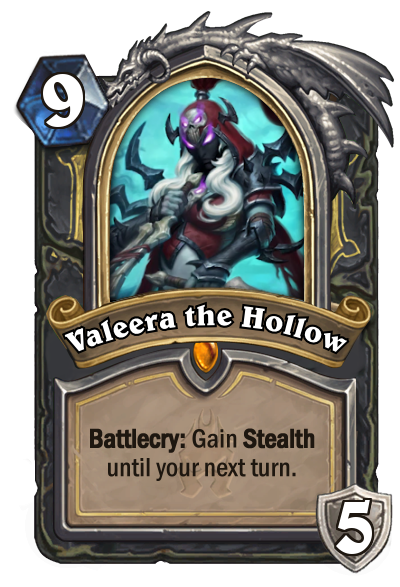 Passive Hero Power: Death's Shadow
During your turn, add a 'Shadow Reflection' to your hand. 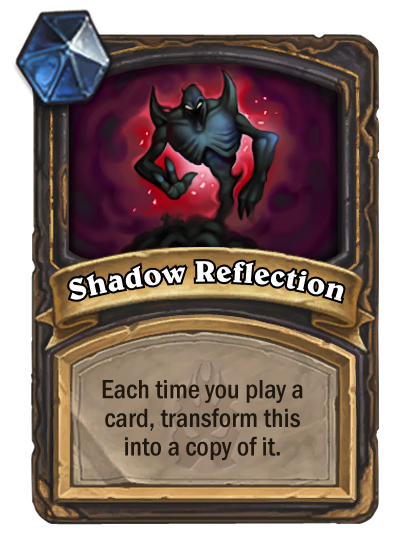 Shadow Reflection
Type: Passive Hero Power
Class: Rogue
Each time you play a card, transform this into a copy of it.

The first thing players will notice is that this is the first-ever instance of Hero Stealth. Stealth is a valuable tool that prevents opponents from targeting particular minions, but now this prevents opponents from targeting Valeera. And like Stealth, there are ways around it. Spells like Mind Blast and effects from minions like Knuckles will still cause damage, so the Rogue isn't entirely safe. But unless the opponent is packing some real late-game magic, the 5 Armor bonus provided by the Hero Card should be enough to ensure survival until the next turn.

Speaking of survival, Valeera's newfound Stealth effect gives her some valuable protection against Freeze Mages, Quest Mages, and, well, pretty much any other class for one more turn. Playing this card following an Alexstrasza turn means the Rogue gets boosted by 5 Armor and cannot be targeted by those game-ending spells until the next turn, giving Rogue ample time to answer. Zoos have no Hero left to target, so they have to either sit inert or trade into opposing minions. And barring any change in terminology to cards like Flare or Streetwise Investigator, there's no real way to force Valeera out of the shadows. This is an obscenely powerful effect that essentially brings the opponent's momentum to a grinding halt, unless it's a class like Hunter that can strike face with its Hero Power. Hope you haven't played that Deathstalker Rexxar yet.

The next thing about the Rogue card is the Passive Hero Power, which grants a copy of any card played. That applies to both spells and minions. This one's a thinker, because the card copy itself comes at full cost. So playing 6-mana or higher and playing a copy of that is a no-go without the aid of a card effect. And like Thrall, Deathseer before her, Valeera the Hollow is at the mercy of her available resources.

Miracle Rogue is the deck type that just won't die, having survived numerous meta shifts and even card nerfs. Valeera the Hollow should fit into the Miracle Rogue archetype nicely, since the idea here would be to hold off until it's time to play some massive game-ending minions at the end. Savjz's example saw him trot out three Arcane Giants. Or maybe trot out one Arcane Giant each turn to get more copies. There are also circumstances in which Valeera can replenish her hand with a late game Mimic Pod, where the copies would just keep coming.

In Miracle Rogue's case, Valeera the Hollow and the Giants would work more as a last resort, since the typical strategy involves trying to end the game early with Questing Adventurer and Edwin VanCleef. If those minions are on their game, the game will be over well before Turn 9. If not, it's time to hide and bring out the Giants.

Jade Rogues will also get a major boost here. By the time the game hits the later turns, the Jades should start getting bigger and harder to handle. Assuming Valeera's saved up something like Jade Spirit or Jade Swarmer, the Jade Golems will just keep coming. Just keep in mind that the Shadow Reflection only lasts for that one single turn, so no trotting out Aya Blackpaw on repeat. Not unless the idea is to Shadowstep and wait until the next turn.

There's a fear that resources will eventually run thin, though Savjz pointed out in his video that Elise the Trailblazer is a prime Legendary for any Death Knight Rogue decks, offering up potentially multiple Journey to Un'Goro decks to replenish the Rogue's waning hand. 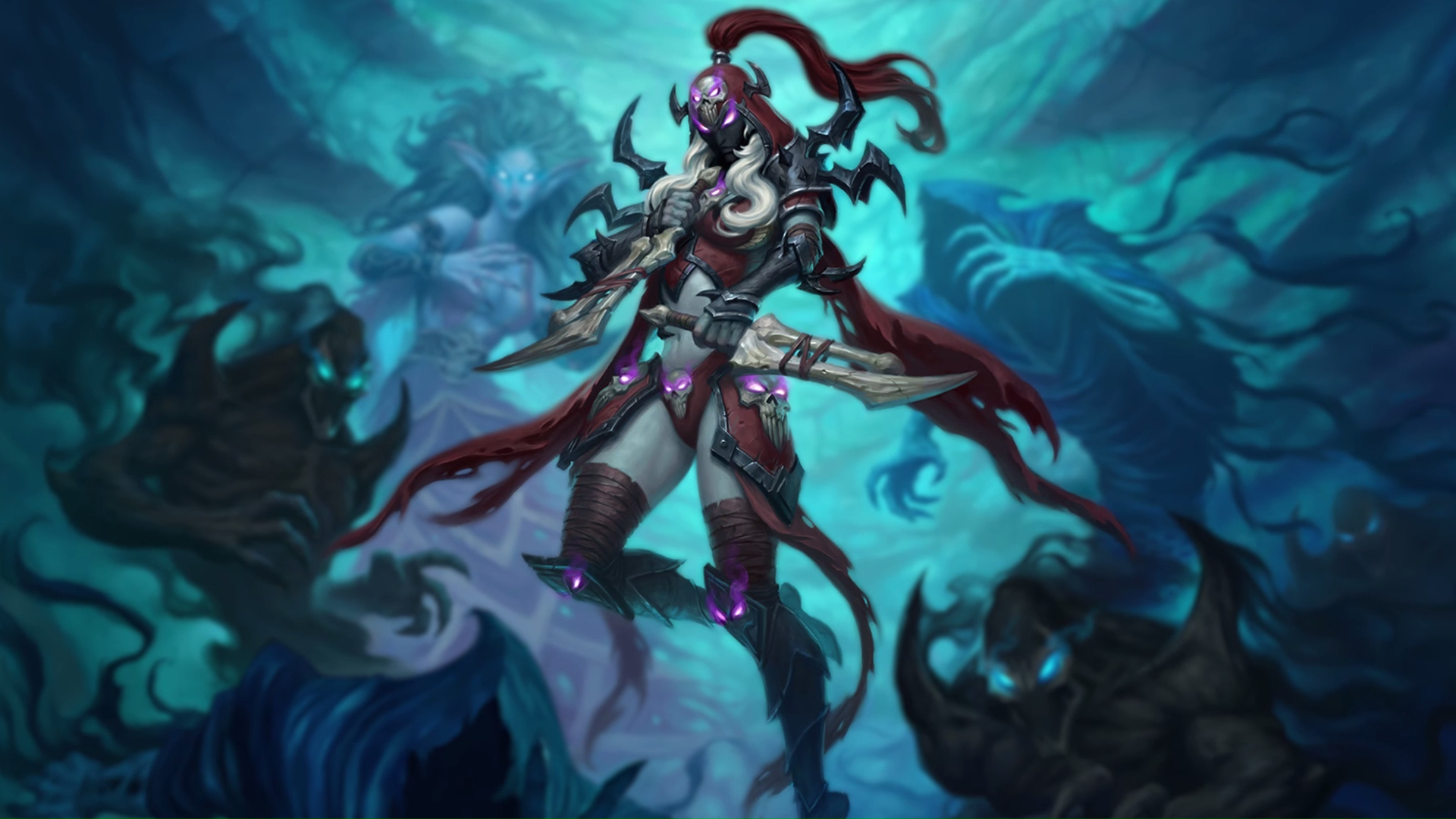 Playing Against Valeera the Hollow

There's little that can be done if Valeera takes to the shadows, so the best hope is to stall for at least one more turn. Of course, the best strategy is to end the game before Valeera the Hollow can even take the board. Get aggressive with Shaman Zoos, Druid Zoos, Hunter Zoos, and Pirate Warriors and aim for the face, in hopes of ending the game around Turn 6 or 7. Rogues have few ways to protect themselves in the early game, which can make them vulnerable to face rushes.

So what happens if the Rogue does manage to play the Hero Card on Turn 9? The situation is dire, but she's still not unbeatable.

The best class equipped for dealing with Rogue is Druid, particularly the Jade Druid. Because the Jade Druid's resources never end, by design, this deck is best equipped to deal with a hiding Hero. While Valeera the Hollow gets copies of cards, her deck is still finite. Meanwhile, the Druid can keep pumping out larger and larger Jade Golems, becoming nigh unstoppable.

There's also Quest Warrior, which is not only protected by a wall of Taunt minions, but later in the game, he'll get that Ragnaros Hero Power that hits any random target on the board. And that random 8 damage doesn't care for Stealth and can strike face at any time. There's no hiding from that.

The last resort is to simply outlast the Rogue's resources, which should be running thin by the late turns, and play a strict control style game. Use massive board clears when necessary and hope Rogue runs out of effective plays.