Hearthstone's next expansion, Knights of the Frozen Throne, is slated to release in mid-August. While the main attraction will be the new Death Knight heroes, the expansion is set to receive 135 new cards. Shacknews is going to do its part to march towards this new expansion by analyzing the new cards throughout the week. 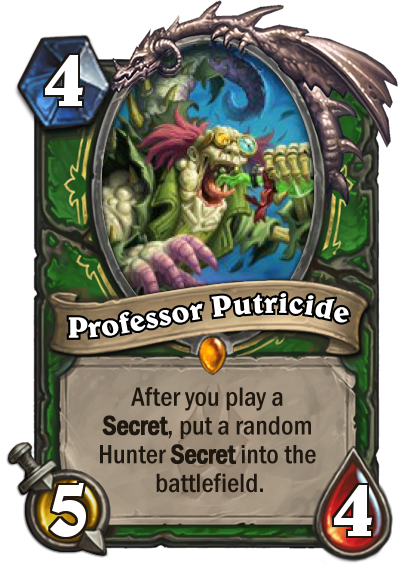 It's looking more and more like Knights of the Frozen Throne could mark a resurgence for Hunter and that Hunter is going to come in different varieties and flavors. Professor Putricide is a new Legendary aimed specifically at the Secret Hunter archetype, which will make him a force to be reckoned with.

Hunter Secrets are some of the most annoying in the game and they almost always hurt in some capacity. That's all the more reason to deal with Cloaked Huntress the minute it hits the field, otherwise Professor Putricide is going to go to work, planting numerous random Secrets. They can be ones that aren't typically packed in, like Snipe, or offer up an extra Freezing Trap. Either way, it's going to be annoying to deal with this guy, even if his 5/4 stats don't present much of a threat.

The other thing to look out for is that Secret Hunter and Deathstalker Rexxar can potentially co-exist peacefully, so be wary of decks taking advantage of both the new Death Knight Hero and a gaggle of Secrets. 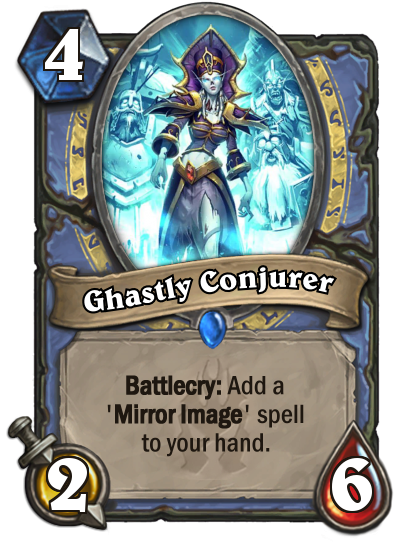 This Battlecry will be very useful for various Mages, especially for Quest Mages looking to get that precious extra turn. Open the Waygate could prove to be quite the wild card in the new meta and one way to make it more viable is to provide an extra cheap spell, like this cheap Mirror Image.

An extra Mirror Image has its versatile uses, whether it's staving off aggro decks for a few turns or fueling Archmage Antonidas. Expect to see this minion in a lot of Mage decks, unless they're sticking strictly to Elementals, in which case it won't be replacing the 3/6 Water Elemental anytime soon. 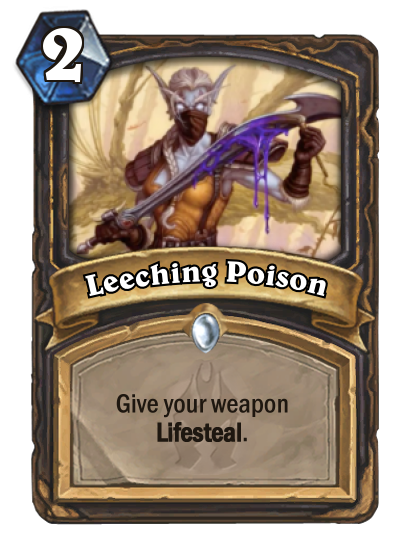 Well, it's a benefit for Rogue weapons, but that's about all this guy has going for it. Lifesteal is a mechanic that's more effective in later stages of the game, but by then, minions will be a lot more buffed up and the trade-ins won't be worth it. Best case scenario, if (and that's always a big 'if' nowadays, isn't it?) the Rogue's weapon is powered up, there's a chance to buy some extra time by going straight face with it.

It's an effect that looks nice on paper, but this one's a dud. It'll be the card that people dread getting from cards like Swashburglar. 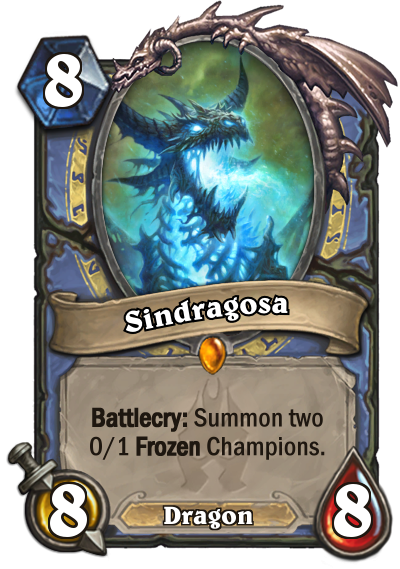 YIKES! Sindragosa was mentioned in passing during last week's Frost Lich Jaina analysis, but yeah, this guy is going to hurt. A lot.

On top of adding an 8/8 body onto the field, the 0/1 Frozen Champions will each offer a random Legendary whenever they die. That means the Mage can get a new Legendary off a simple Hero Power ping. And if that Mage is Frost Lich Jaina, she'll also summon a fresh 3/6 Water Elemental, to boot.

Any decks that are running Frost Lich Jaina should run this Legendary 100 percent of the time. Standard Freeze Mages that are looking to end the game quickly, however, have a good reason to pass Sindragosa over in favor of their old staple, Alexstrasza. 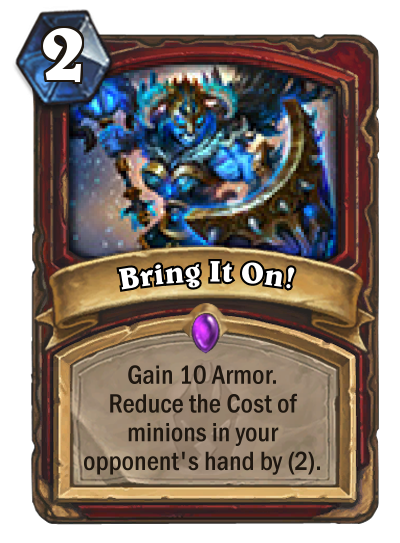 (2) Bring It On!
Type: Spell
Class: Warrior
Rarity: Epic
Gain 10 Armor. Reduce the Cost of minions in your opponent's hand by (2).
Source: Blizzard

This is a huge gamble for a huge reward. An extra 10 Armor is gold, especially if that play can get followed up by a hard-hitting Shield Slam.

But this is a spell that's going to need to be played responsibly. Playing it against Druids, Paladins, and Shamans almost ensures they'll get their entire hand out on the board, so any Warriors playing this card had better have a Brawl handy next turn.

The assumption can also be that it's a good card for playing against spell-heavy Mages, but that might not be the best idea, either. Playing this spell would potentially give Mages a free Sorcerer's Apprentice and that can be an absolute killer. This is a cool card and a nice effect, but be really careful when playing it.

(Of course, anyone that feels like being a total jerk, try playing this card against Quest Hunters and then sit back and laugh.) 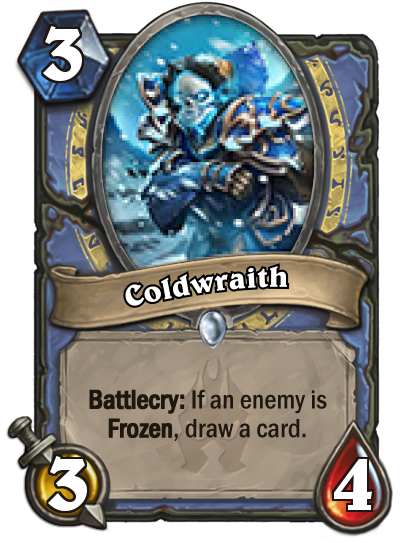 Here's a solid Turn 3 play, assuming Turn 2 involved sending a Frostbolt into a target and not killing it. That would ensure a card draw, which is a nice effect in the early game, especially for Tempo and Freeze Mages. But even if there are no frozen targets, it's still a 3/4 body on Turn 3 and that's still pretty good.

Sadly, the effect does not allow Mages to draw a card for each Frozen minion, otherwise this would be a powerful minion for the late game after Freeze Mages start dropping those Frost Novas and Blizzards. As it is, it's a decent tempo play with a potential Battlecry bonus. 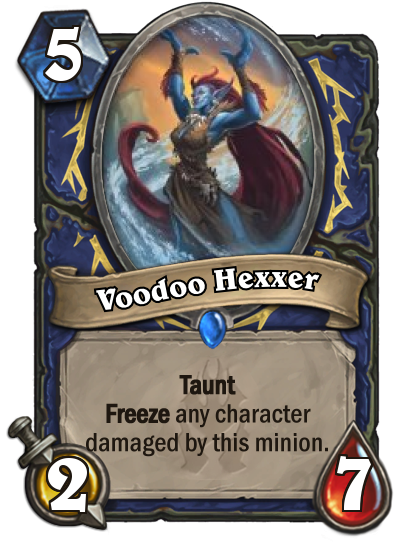 Look out! Shaman is getting a cross between the Mage's Water Elemental and the Warrior's Alley Armorsmith.

On top of keeping aggro decks at bay, this is also feeding into the new Freeze Shaman archetype. It plays very nicely with a lot of the Shaman cards that have been revealed to this point and, played correctly, can be a bear to deal with. It should ward off, if not outright stop, Pirate Warriors, while it forces other zoo users to burn a removal spell to keep their momentum going.

Even if it isn't an automatic pack-in for Shaman players, it's still an amazing pull from Stonehill Defender and a great candidate for Spirit Echo.

But while it's a good minion to play against aggro classes, Priests are going to salivate over the idea of playing Potion of Madness and Cabal Shadow Priest with this guy. So be extra careful and don't get sloppy. 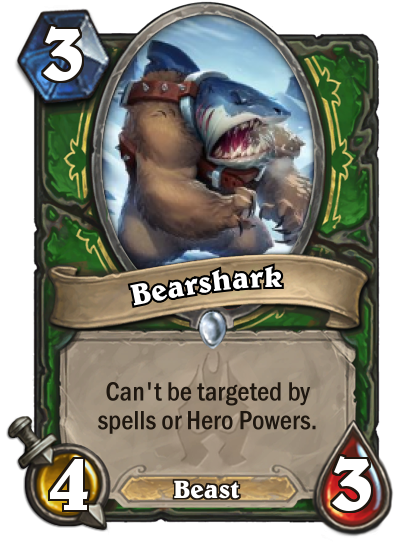 Remember that time a few weeks ago when Shacknews spoke to some of the Hearthstone designers? I do! Let's revisit that interview.

Mike Donais, Principal Game Designer: Build-A-Beast, as we've seen, is you craft a custom Zombeast, which we've never done before. Flavor-wise, it's Rexxar finding these animals and making better animals out of them. Like if you take a shark and a bear and you put the shark and the bear together, you get a sharkbear and it's twice as good!

And look at that! The madmen went and did it!

Yes, this is a Bearshark and its stats are amazingly impressive. As a Turn 3 play, it's fearsome. With a Turn 4 Houndmaster play, it's downright frightening. If there isn't anything to dispose of the Bearshark as soon as it's played, the Hunter can potentially pull away quickly. And since it's immune to spell removal, there isn't a lot that can deal with this freaky bear-shark hybrid. This could quietly be the best addition to the Hunter's arsenal over this entire expansion. Not much more to say about it, other than beware the Bearshark.

That's all for now. Come back tomorrow for another round of card analyses. Plus, remember that Blizzard is promising Death Knight reveals for this week, in what is being billed as "Death Knight Hero Week." Shacknews will do deeper analysis on those individual Heroes as they are revealed.