In addition to a handful of other Knights of the Frozen Throne cards, Blizzard's Friday livestream saw the reveal of the game's latest Death Knight Hero.

If Deathstalker Rexxar looked fierce, that appears to be nothing compared to the pure insanity that is Frost Lich Jaina. So while Rexxar was lumped in with the other card reviews so far, going forward, Shacknews will analyze the Death Knight Heroes individually, doing a deeper dive on their synergies, viability, and damage potential.

So let's look at the frosty Mage to see what Hearthstone players will soon be up against. 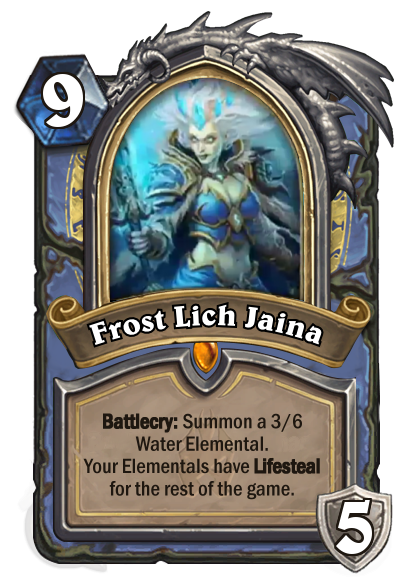 The first thing to note is that on the surface, this looks like the Mage's answer to Lord Jaraxxus on the Warlock side. It's a 9-mana play for an uber-powerful Hero with a wildly strong Hero Power. Then it starts to sink in that all of the Mage's Elementals will have Lifesteal for the remainder of the game. Plus, as long as Jaina can ping away with her Hero Power, she can create more Water Elementals and keep on freezing her targets.

It should be obvious that Elemental Mage should be the first option with Frost Lich Jaina. With Journey to Un'Goro emphasizing the Elemental game, Mage players shouldn't be short on minion options. That means packing Servant of Kalimos to keep the Elemental train going, along with Steam Surger, Tar Creeper, and Blazecaller to maintain control of the board.

There's also Pyros, which should follow along that mana curve as the game moves forward. Playing Frost Lich Jaina on Turn 9 and the 10/10 Pyros on Turn 10 could be a nightmare to deal with, especially with the big bird having Lifesteal, to boot.

The Secret Mage might also get some use out of this, since the key is surviving until that Turn 9 Death Knight play. Ice Block, Ice Barrier, and Counterspell are all keys to dragging the game out, while Kirin Tor Mage and Kabal Crystal Runner will keep things stable on the minion side.

UPDATE 7/29/17: Oh right, how could I forget? Regardless of which style of Mage one prefers, new Mage Legendary Sindragosa becomes an absolute must-have in this deck. The 0/1 Frozen Champions that it summons will not only replenish the Mage with some valuable Legendaries, but also summon another 3/6 Water Elemental for each one killed. Players can follow up their Turn 9 Frost Lich Jaina play with a Turn 10 Sindragosa and ping of a 0/1 Frozen Champion to bring out another Water Elemental immediately. It's so good that Frost Lich Jaina without Sindragosa sounds more like madness the more one thinks about it.

With Frost Lich Jaina able to keep herself alive with her life-sucking Elementals, what hope does an opponent have?

Ironically, the best strategy against Frost Lich Jaina is a standard Freeze Mage. If a Freeze Mage can get off Alexstrasza before the opponent can play their Death Knight Hero, they can easily take the win with Alex to face and a pair of Fireball spells.

Quest Mages might also have a chance, as long as they can pull off the Quest Play and launch some Sorcerer's Apprentices and Molten Reflections before firing away with Archmage Antonidas and his neverending Fireball supply.

Blizzard is promising the remainder of the Death Knight Heroes will be unveiled next week, so keep an eye on Shacknews for analysis on each one. Also, be on the lookout for analysis on the rest of the expansion's cards over the next couple of weeks.