Doom celebrates its 27th birthday today. It's one of my favorite games, and one of the most important games in our industry. Ring in this auspicious occasion with several Shacknews long reads dedicated to Doom and Doom-adjacent topics!

Stairway to Badass: The Making and Remaking of Doom

Management shakeups sent more tremors through Doom 4. In 2009, ZeniMax Media, parent company of Fallout 3 and Elder Scrolls developer Bethesda Softworks, acquired id Software and added the company's venerable properties to its portfolio. Four years later, Carmack abruptly departed id, the company he had co-founded, to assume a leadership position at Oculus VR. (Carmack cited ZeniMax's unwillingness to support the Oculus Rift headset as the primary cause for his exit. Allegations that Carmack absconded with proprietary VR technology that he had developed while still at id led to a bitter legal battle between ZeniMax, Oculus, and Facebook, which acquired Oculus for $2 billion in 2014. The battle is ongoing as of April 2017.)

All the while, id Software struggled to find its footing on Doom. The decision to scrap "Call of Doom" and go back to the drawing board was difficult but necessary. "There's a million little things that go into every decision like that," explained Stratton, "but ultimately it didn't end up feeling like what we thought the next Doom should be. I think that was the fundamental thing that happened."

It would have been easy for Bethesda, ZeniMax's proxy, to can the beleaguered project, or infest id Software with producers vested with the power to force them down a creative path. Marty Stratton said that the publisher deserves credit for giving id the freedom to go back to the drawing board.

"A lot of other publishers, I don't know that they really would have been as supportive as they were in making those changes, because they're hard. That's money spent. You're moving away from a lot of work that was done, it impacts the morale of the team," he said. "I don't think we make bad stuff. It would have come together, but ultimately I think we made the right decision." 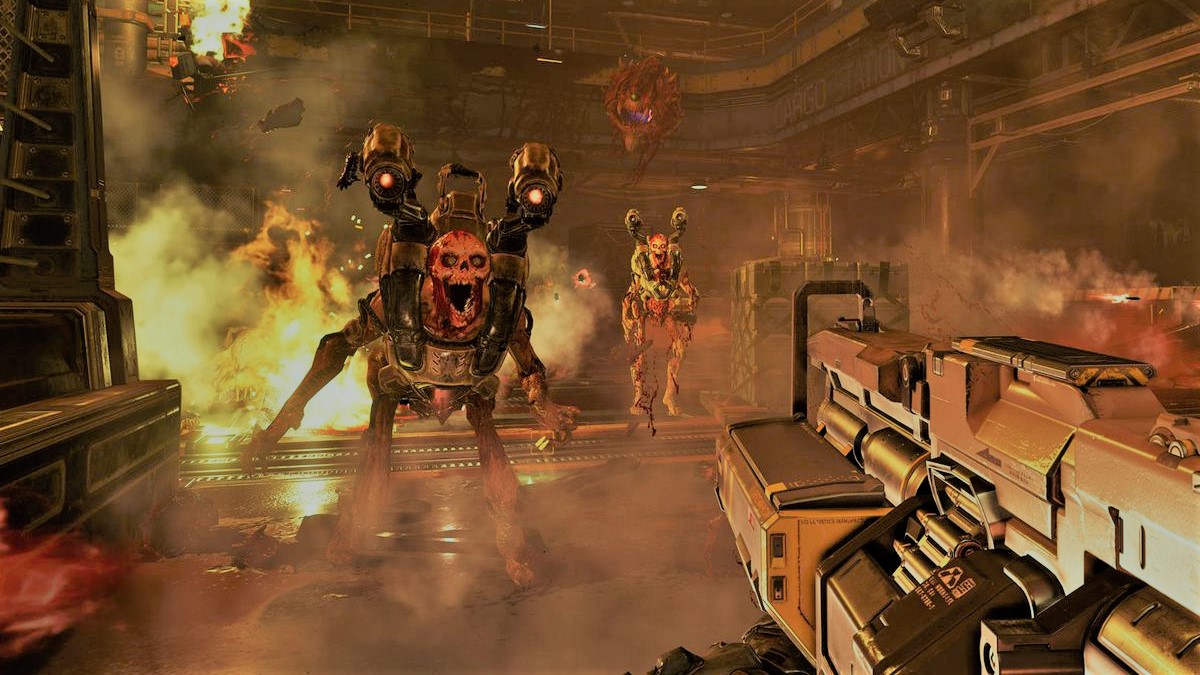 Super Doom: How id Software's Opus Made the Jump to Super NES

ON DECEMBER 10, 1993, ID Software's developers uploaded Doom to a high-speed file-sharing server maintained by an IT administrator who oversaw University of Wisconsin's network. The shareware episode arrived to great fanfare. So great, in fact, that the admin had to ask hundreds of users eager to download Doom to log off so id could transfer the game. Instantly the chat rooms became ghost towns.

At two o'clock that afternoon, the gamers at id uploaded Doom, and all hell broke loose.

Grown adults in businesses suits clogged office networks to frag one another in deathmatch. College students flunked out, and didn't care. Doom's virtual world of demons and rocket launchers was better than real life.

Two years later, in the early months of 1995, a package showed up at id's office in Dallas, Texas, with zero fanfare. Inside was a prototype cartridge for the Super Nintendo. The guys locked it into place and powered on the console.

Craddock: I was even more surprised Doom existed on the Super Nintendo. I found that version in a bargain bin at my local K*B Toys for, like, 20 bucks. I remember it came in a red cartridge. I also remember it wasn't very good, simply because the SNES was so old by that point.

Romero: We didn't even think to do a Super Nintendo version of Doom. That hardware was absolutely not made for 3D. It was kind of like the Amiga: the Amiga was doomed to not play 3D games back then. Super Nintendo was good for horizontal scrolling, parallax effect, all that stuff, but Mode 7 was as crazy as it got.

So we were really surprised when a Doom cartridge for Super Nintendo showed up at the office. We were like, "What?" We plugged it in and ran it, and were like, "Oh my god. Doom is on the Super Nintendo." Sculptured Software in Salt Lake City had decided they were going to port Doom. They reverse-engineered it and sent it to us, and we said, "Um. Okay. We'll get this published." That was probably one of the rare times when a company decided to do a port and then just did it for free.

We were really surprised. We didn't think the Super Nintendo could do it, but incredibly, that was so many people's first exposure to Doom. When that cartridge arrived in our office, my dad lived in Salt Lake City. I'd lived there for a little bit. The next time I went to see my dad, I went to Sculptured Software's office to say hi and compliment them on their work.

NINTENDO'S NOMENCLATURE FOR SUPER NES was easy to grasp. If a developer ran short of ideas, they could just spit out a title and stick "Super" in front of it. Super Star Wars, Super Punch-Out, Super Bomberman, Super Castlevania IV, Super Metroid.

Nintendo 64, renamed from Ultra 64 after its 64-bit architecture, followed a similar syntax: Title of Game, followed by "64." Super Mario 64, Pilotwings 64, Bass Hunter 64, and so on. Often, titles bearing the "64" label were iterative sequels to two-dimensional games taking the logical step into the third dimension, or ports of existing games, such as Duke Nukem 3D on PC becoming Duke Nukem 64. Midway and id Software were determined for Doom 64 to be the exception to the rule.

"They could do what they wanted," explained John Romero, co-founder of id, regarding the Doom 64 team at Midway. "Make it a different story, not even on the same narrative path. That's what they did. They wrote a whole new engine, completely new levels, higher-res graphics for characters." 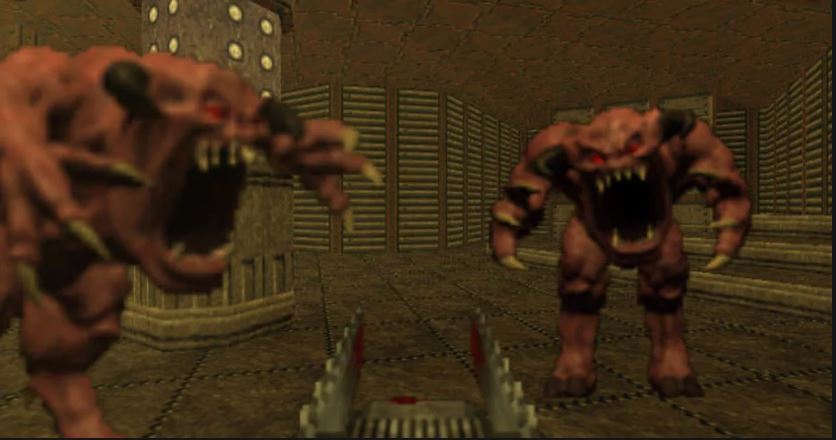 Icon of Sin: Doom and the Making of John Romero's Sigil

All the while, Romero received notification after notification from Doom players who were enjoying his Doom maps. Fans were still leaving comments about his remakes of E1M4 and M8 on YouTube and Doom World. Speed-runs popped up. Romero smiled as he watched them. Back in Doom’s heyday, fans had been able to record in-game demos and share them online, but recording them had required players to type in esoteric commands as they booted up the game. Watching replays had been just as complex. First, Doom fans had to find the replays, a tall order in the days before Doom World and Google. Second, demos could only be viewed from within the same version of Doom that had been used to capture the footage.

“That was always like, ‘Which version of Doom was this recorded with? Is it going to play back on this version of Doom that I have?’ I didn't do that much,” said Romero of watching replays in the ‘90s. “With YouTube, you can just watch. It's immediate, and it's great to hear people talk about it.”

Several fans posted messages wondering if Romero would take the next logical step: Releasing an entire megawad, or a pack of custom levels.

The more he read and the more he watched, the more Romero felt inspired to take that step. By Christmas 2017, he had made up his mind. He would return to designing levels for Doom, but which version? And what would those maps look like? How would they play?

“None of those questions had answers,” he admitted. “It was just this idea: Yes, I will do an episode. I think people will like it, but I need to do even better than E1M8b and M4b.”

DESIGN CONVERSATIONS CAN HAPPEN ANYWHERE at id. The bullpens are spacious, with room to roll around in chairs, and whiteboards on walls so developers can scratch out ideas on the fly. Hugo Martin and Marty Stratton could often be found leaning against a low wall near one of those boards, talking amongst themselves or with other developers about ideas for their sequel, named Doom Eternal.

One afternoon, Martin caught up with Stratton before they headed out for the day. "No one's playing the game," he said. One of the hallmarks of a great game, Martin knew, was developers staying late and coming in on weekends just to play, even if they'd already logged 80-plus hours at work. They'd been working for a year, and no one, not even Martin, was playing Doom Eternal for fun.

At first, Stratton smiled. "What are you talking about? I love Doom."

Martin waved him off. He loved Doom. So did everybody on the team. But if Doom Eternal was fun, he argued, he should be looking for any reason to hang around the office and play. That's what he'd done during Doom 2016.

When the team reconvened, Martin and Stratton polled developers on their thoughts. They came away with a troubling consensus. In its current state, Doom Eternal still rewarded players for indulging in the high-speed violence that had made classic Doom games so iconic. But something was missing. Push-forward combat and Glory Kills were still awesome. They were also old hat.

Martin's feelings concretized as QuakeCon 2018 approached. The annual keynote would end with the worldwide premiere of Doom Eternal. Martin spent weeks capturing footage of himself playing to put together a kickass trailer. He played the way it was meant to be played: maximum aggression, swapping weapons like a performer juggling a dozen balls, zooming in on wounds his weapons had inflicted on monsters, and swinging between enemies using the meat hook, a new item that players could use to pull themselves toward enemies.

In essence, he followed the script he wanted other performers, the game's intended audience, to follow.

"You couldn't put your finger on it, but the game got really boring because nothing could touch you," Martin explained. "You could dash away from projectiles and enemies so easily that you could blast through the whole game like it was nothing. That wasn't good." In November 1995, John Carmack came to a decision.

"I do remember the turning point for me was when American copied a bunch of Doom textures over to the Quake engine and made a little snippet of a level, and I thought it looked amazing with the lighting and geometry," Carmack recalled. "The idea of falling back to 'just' making a shooter didn't seem so bad."

Stepping out of his office, Carmack entered the communal area where most of the others worked. Romero, Petersen, McGee, Dave Taylor, Kevin Cloud, and Adrian Carmack were there, plugging away on tasks. Noticing Carmack, Petersen turned in his chair. Carmack recapped the team's activity over the last several months. Most everything the designers had created, they'd had to scrap. On the bright side, id Tech 2 had gone through a staggering eight revisions and was more or less finished.

The tech was in place. The time had come to lock down a game design. For Romero, the impromptu meeting came with big stakes. "The decision to consider was, now that we've innovated in our technology, are we going to innovate in our game design?"