When I heard they were doing a new Dune movie, I was very excited and very scared.  Dune has a reputation of being difficult to adapt, and even though David Lynch’s Dune is one of my favorite movies, it was a box office bomb when it was released in 1984.  It is a huge undertaking to adapt Dune to any screen and people will either love it or hate it.

I watched Dune, Part One yesterday at a movie theater, and I am pleasantly surprised that I liked it. I thought I would hate it and had second thoughts about seeing it. But I am glad I did and I might watch it again, especially since I have HBO Max.  Some will compare this to David Lynch’s Dune, but I cannot compare the two. Dune, Part One is truly a “Part One,” so it’s not fair to compare it to Lynch’s Dune since the latter tells the full story.  I can only truly compare the films whenever “Part Two” is released, but I really loved the music in Lynch’s Dune and I missed that in Dune, Part One. 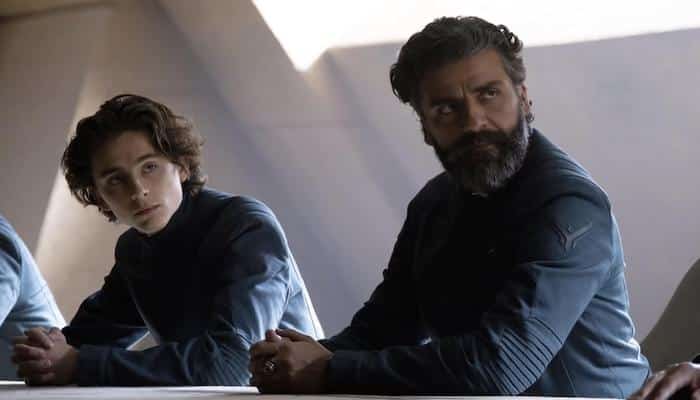 **There might be some spoilers in here, so proceed with caution.**  Dune takes place in the far future in which the known universe is ruled by Emperor Shaddam IV.  By Imperial decree, the Emperor has removed the House Harkonnen from their 80 year rule over the planet Arrakis and has installed the House Atreides as the new rulers.  Arrakis is home of spice production. The spice is the most sought-after substance in the universe, used by the Spacing Guild for navigation and can be used for a variety of health benefits. House Harkonnen launches a sneak attack upon House Atreides with the Emperor’s blessing.  The Emperor is jealous and feels threatened by the growing popularity of Duke Leto of House Atreides.  But there is also the Duke’s son, Paul, and his prophetic dreams and a hint that he might be more than just the Duke’s son. *** End spoilers.

The movie did a good job of introducing us to the characters and major players in the story.  The Emperor is mentioned but you don’t see him only the ones plotting for him.  I enjoyed the fight scenes especially when Ducan Idaho escaped the city.  Liet Kynes had more to do like aiding the Atreides.  The Voice used by those with Bene Gesserit training was well done with time stopping and a burst of inhumane distortion and force.  I also liked Jessica training Paul in using The Voice, though I’d like to have seen more of the “Weirding Way.”  The film was filled with subtle beauty from the different environments to the set designs to the music.  Paul's visions are weaved effortlessly into the narrative, building and adding more to each vision.  I would have loved more color in the background, set designs, and a little more weirdness in the costumes.  But, nonetheless, it was beautiful.  They could have added more of the Fremen and their seitches, but hopefully that will greatly featured in the next film.

Even though I’m very familiar with Dune, and I’m not sure if newcomers will understand or care enough to continue the journey.  I very much want to see what is next and hope we are able to explore more of the world and universe of Dune.

The cast is filled with POC

Interesting details of the Bene Gesserit training, such as The Voice and hand languages

Should be seen on a big screen

Newcomers may not understand or care

Not very colorful or other wordly