Not all PC users like playing their favorite games on a desktop. Laptops are the way to go, and Razer has unveiled the Razer Blade Pro designed to put some desktop units to shame.

The new Windows 10 laptop boasts an overclocked i7 7280HK processor running at 2.9/3.9 Ghz, an Nvidia GeForce 1080 (with 8GB VRam), fast 32 GB DDRAM, and a 17.3" 4K UHD G-SYNC touch display. It comes with 512/1TB/2TB SSD hard drive options, 3 USB 3.0 ports, and HDMI 2.0 video and audio output. And while all of that is great for a portable, Razer is promoting it as the first laptop to ever receive THX certifcation, meaning that the "screen is calibrated and tested for resolution, color accuracy and video playback performance" according to THX standards. 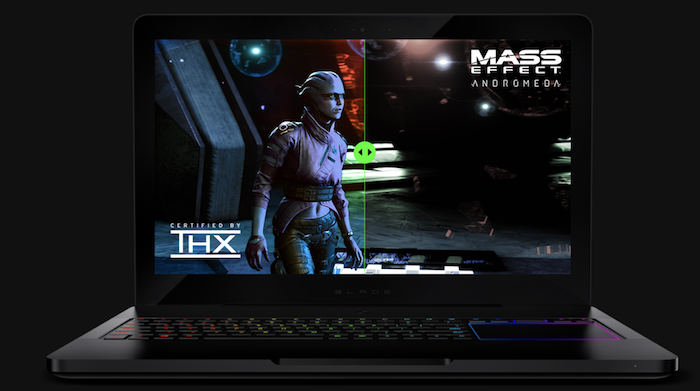 While some laptops that have this type of power run rather thick and cumbersome, Razer has reduced the thickness to under an inch, and weighing less than eight pounds. While that could still be a backbreaker toting it around at conventions between meetings, it could be great for developers who travel and show off games.

If you are comparing this to last year's model, though, all that has changed is the CPU and RAM ... and the certification.

“The Blade Pro was recently hailed as the ultimate Windows laptop, and we’ve leveled-up on our previous achievements with certification by THX,” Razer CEO Min-Liang Tan, said in his obligatory comment for the release. “Each refinement of the Razer Blade Pro moves us closer to an ultimate desktop replacement.”