Shovel Knight: Specter of Torment Review: To Die For

In today's climate of open world sandbox first-person shooters/RPGs/puzzle games/adventure games, it's easy at times to forget the pure satisfaction of crossing from one edge of a 2D plane to the other. Shovel Knight: Specter of Torment  by Yacht Club Games is an ideal title to launch with the Nintendo Switch. The Nintendo Entertainment System brought us some of the 2D greats, with Castlevania, Mega Man, Mario, and others getting their start there. Shovel Knight: Specter of Torment taps into these 8-bit greats and adds some modern smoothness that will have fans rolling in nostalgia.

Not that Specter of Torment needs to tap into that nostalgia to be a good game. It has an illustrious pedigree as the first standalone expansion of the much-lauded Shovel Knight. I dabbled with Shovel Knight, but never could quite get into it. Specter of Torment had a lot more appeal to me because of the way the player character, Specter Knight, controlled. Specter Knight feels much more like a Strider Hiryu than a Simon Belmont, and I feel the game is all the better for it.

On Its Own Two Feet 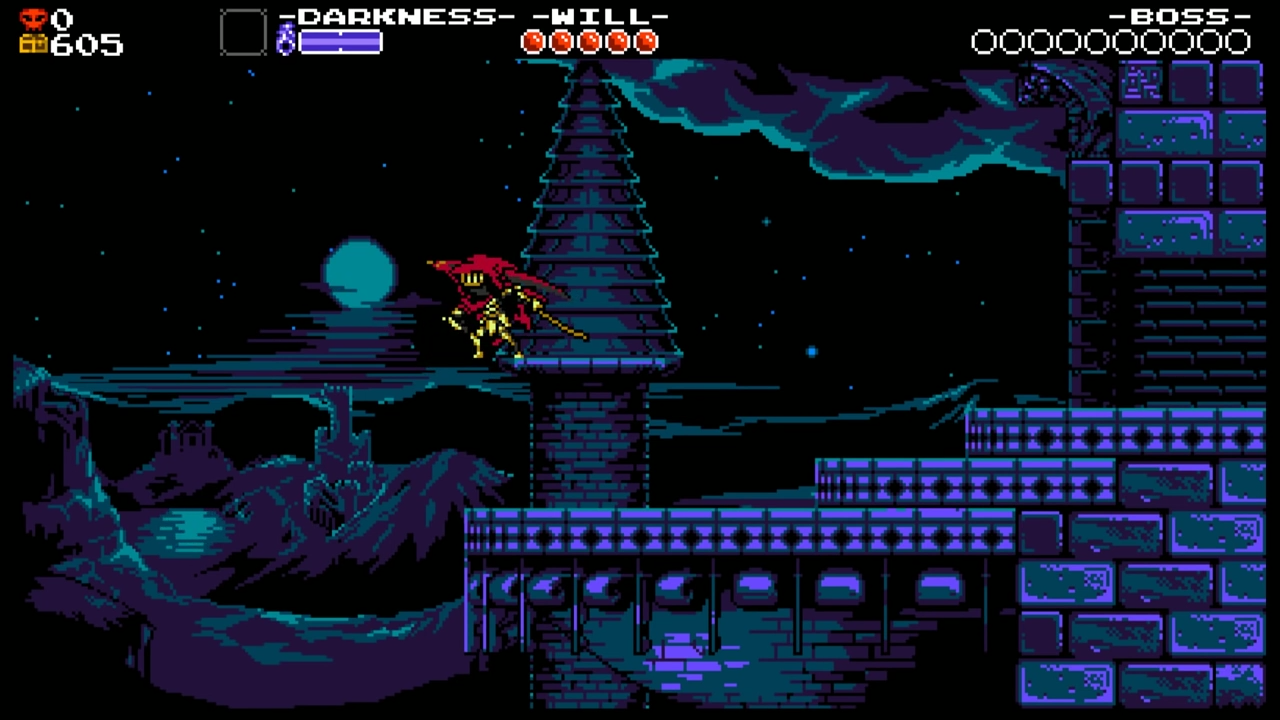 Specter Knight is more mobile than the series past heroes as well due to the inclusion of lanterns. Lanterns can be used to perform an upward or downward slash with Specter Knight's scythe which allows for rapid mobility in those directions. Although the game starts you out easy with a single lantern jump needed to get through an area, as time goes on you'll encounter much tougher multi-lantern platforming sections that require the same sort of precision that made Mega Man so fun and frustrating on the NES. Also, unlike the DLC Plague of Shadows, Specter of Torment takes place through whole new levels instead of a repeat of the first Shovel Knight.

Unfortunately, your adventure with Specter Knight is a bit on the short side. In about four hours you can run through the game, but for the $10 price, there are few better experiences available on the Switch right now. Shovel Knight: Specter of Torment is a blast for fans of 2D platformers, but the one drawback to its release on the Switch is that those who already own Shovel Knight on another platform will get the game for free in April. If you already own Shovel Knight on any of the huge number of platforms it has released for, if you can wait a month then you'll automatically receive Specter of Torment in an update. There are no unique functions in the game that the Switch provides, so you're not missing out if you already have the game on another system.

For those who yearn for the days of platforming yore, Shovel Knight: Specter of Torment is a dream come true. Some will be turned off by its lack of scope, especially when it seems like every major title that comes out is filled with lore and unbound exploration. However, sometimes it's just great to spend some time with a game that just has tight, precise gameplay that doesn't require you to deal with endless mechanics and crafting to get enjoyment. Specter of Torment is that game, a modernized version of the platforming games that we loved and loved to hate from childhood.

This review is based on a download code provided by the Nintendo PR. Shovel Knight: Specter of Torment is available now for the Nintendo Switch.