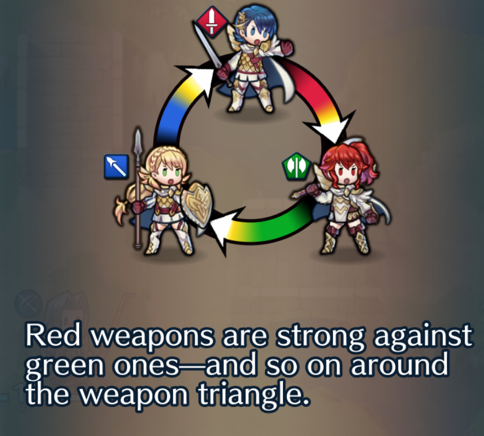 Red is strong against Green and weak to Blue.

Green is strong against Blue and weak to Red.

Blue is strong against Red and weak to Green.

The Triangle of Power is the most fundamental aspect of the battle system in Fire Emblem Heroes. Each hero is either Red, Green, Blue, or colorless, and you'll want to make sure you keep your team diverse so that you don't catch yourself being defeated by an opposition made up of the color to which your heroes are weak.

How to Level Up Heroes in Fire Emblem Heroes

The Types of Crystals and Shards are:

Universal Shards and Universal Crystals level up any hero.

How to Unlock Potential in Fire Emblem Heroes

Badges and Great Badges work much like Shards and Crystals do. You can visit the Training Tower once a day for a chance to win Badges or Great Badges. To get Hero Feathers, you can wait for your friends to visit you or you can win them in battles.

The Types of Badges and Great Badges are:

For more great tips and guides, check out our Fire Emblem Heroes guide hub. For info on other games take a look at the Shacknews guide section.