Things were already difficulty for Agent 47, but players who want more of a challenge in Hitman will be getting it with a new "Professional" difficulty level as a free update to coincide with the launch of the disc version of the game on January 31.

The new difficulty will offer new AI behavior and a separate mastery track, and will eb available for all Season One mission except the Prologue. However, you will need to unlock it first by reaching Mastery Level 20 in each location. So once you hit Mastery 20 in Paris, you can use the Professional setting for Paris missions. Elusive Targets and Escalation Contracts will still only be available on the default difficulty level, which is now called Normal Difficulty.

Some of the new tweaks include players being noticed carrying "suspicious" items, costumes being ruined depending on how an NPC is eliminated, new security camera rules, slower health regeneration and only one manual save allowed, with autosaves disabled. Of course, tougher rules mean better rewards, so expect some new goodies with the release.

More details will be available closer to launch. 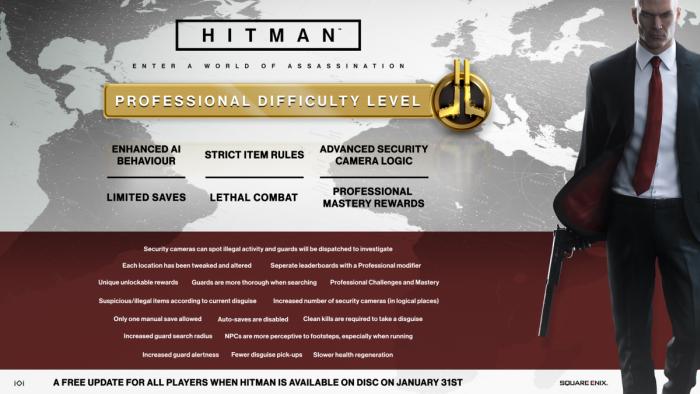