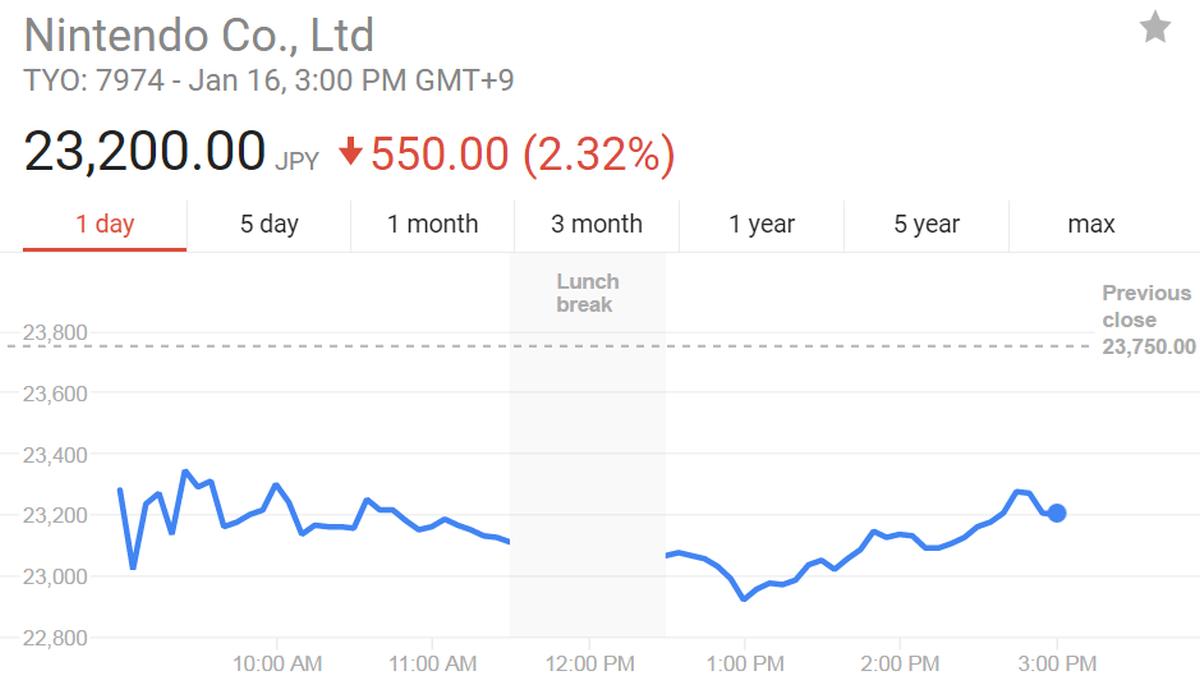 Nintendo's massive unveiling of details for the Switch late last week did not sit well with investors, with the stock taking a hit of more than 5 percent on both the Tokyo and New York stock exchanges soon after the reveal.

By Friday morning, Nintendo had dropped more than 5.75 percent to 23,750 yen, down from a high of 25,085 yen earlier in the day, on volume (7.589 million shares traded) more than three times the previous day. By today, the stock had stabilized somewhat, but still dropped as low as 22,905 yen before rebounding slightly as the day progressed.

In New York on Friday, Nintendo shares dropped almost 6.5 percent from a Thursday close of $27.60 to $25.85 by the closing bell. The U.S. market is closed today for the MLK holiday.

While news of the console received generally favorable press, analysts seemed a bit put off by the rather high $299.99 price tag and no bundled games. There is also some concern as to whether the console-handheld hybrid would appeal to a broad audience. Our own resident stock expert, Asif "Man With The Briefcase" Khan, thinks both investors and fans are suffering from "post-traumatic Wii U Disorder," where that console's failure is still fresh in everyone's minds. That makes dismissing the Switch relatively easy. The "sell first, ask questions later mentality" makes a knee-jerk response to the stock almost normal at this point, he said.

The Nintendo Switch is scheduled to launch on March 3, and we will obviously know more when we can start seeing actual sales numbers, but right now, Nintendo is again stumbling through a hardware reveal that pales in comparison to current gen competitors PlayStation 4 and Xbox One.

Trials of Osiris returns with Destiny 2: Season of the Worthy

Batman: The Enemy Within leads Xbox Games with Gold in March
Login / Register