Sega has announced that Sonic Mania will be released for the Nintendo Switch. Sonic Mania is being developed in the style of the Genesis-era Sonic the Hedgehog games and will play at 60 FPS and feature pixel-perfect physics.

You'll be able to choose between Sonic, Tails, or Knuckles, each with their own special moves, to take on Dr. Eggman. Sonic gets a new drop dash, Tails can fly, and Knuckles can climb, and you'll have to use all your heroes' abilities to discover secrets and hidden paths. 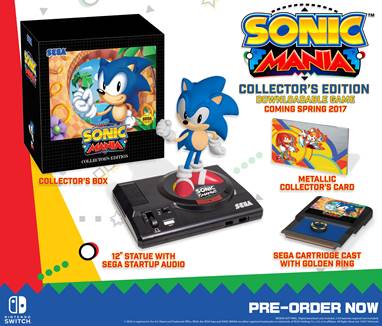 Sonic Mania will be available in a physical collector's edition available for $69.99. The Sonic Mania Collector's Edition features a collector's box, a 12" Sonic standing on a Genesis statue that plays the Sega startup audio, a metallic collector's card, and a Sega cartridge replica cast with a golden ring.

Sonic Mania is coming to Nintendo Switch, PlayStation 4, Xbox One, and PC sometime this Spring.