Razer's Project Valerie tri-screened laptop and Project Ariana smart projector were met with enthusiasm at CES 2017. However, it hasn't been all happy news for Razer this CES; CEO Min-Liang Tan stated in a Facebook post that two of the company's prototypes had been stolen. 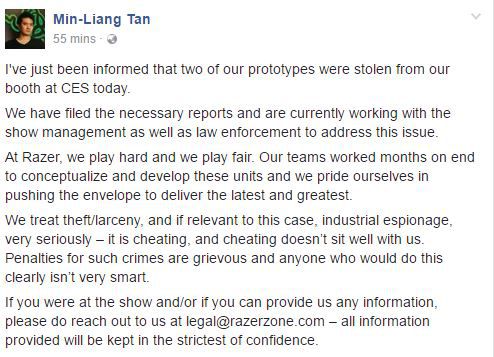 No leads on who stole Razer's prototypes have been revealed yet. Razer didn't state which two devices were taken from their CES booth, or whether it was mere thievery or something more malicious like corporate espionage.

Tan announced that Razer is working with CES show management and law enforcement to solve this issue. On thoughts about the theft being espionage Tan stated, "We treat theft/larceny, and if relevant to this case, industrial espionage, very seriously -- it is cheating, and cheating doesn't sit well with us."

For now, the culprit behind the Razer CES thefts remains at large.