FreeSync is AMD’s royalty-free answer to NVIDIA’s G-Sync adaptive synchronization technology they've announced at CES 2017. FreeSync is designed to synchronize a monitor’s refresh rate with a computer’s GPU. AMD’s newly announced FreeSync 2 isn’t a successor to this technology. Instead, it’s built to run concurrently with FreeSync to build and expand on the tech’s features.

FreeSync 2 aims to standardize HDR support on Windows 10. Currently, HDR monitors may have issues converting a game’s tone mapping in Windows 10 into an appropriately displayed image. The main problem is display lag, leading to lower monitor response times. AMD’s FreeSync 2 seeks to eliminate this issue by handling the HDR conversion directly on the GPU, then passing the tone map to the FreeSync 2 compatible monitor instead of having the monitor do the processing. 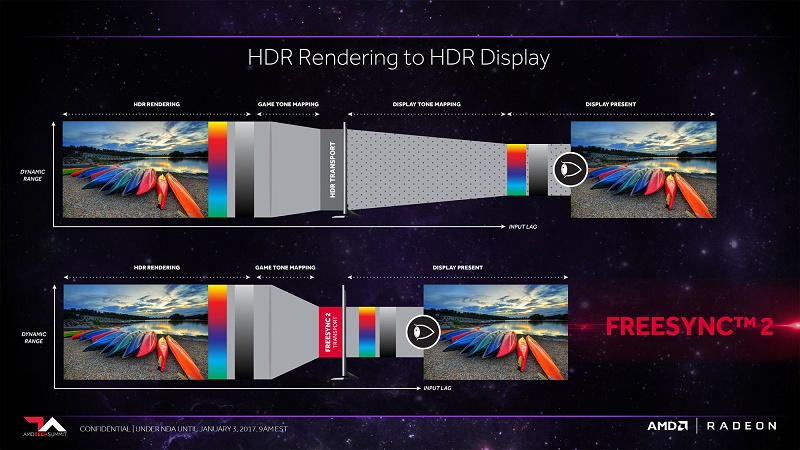 FreeSync 2 will require a bit more input from game developers, though. Unlike FreeSync, which doesn’t need additional game programming, FreeSync 2 calls for specific support from engine and game developers. FreeSync 2 will also be considered a premium product by AMD, and monitors using the original FreeSync technology without the bells and whistles of FreeSync 2 will still be available for low and mid-range monitors.

The big question about AMD’s FreeSync 2 technology is whether or not it will be provided to manufacturers royalty-free. Whether or not there’s extra cost involved compared to the first FreeSync tech could be the make or break of whether this technology is widely adopted or not. As of right now, no FreeSync 2 compatible monitors have been revealed, so we’re still in the dark on just how much of a premium FreeSync 2 will command.