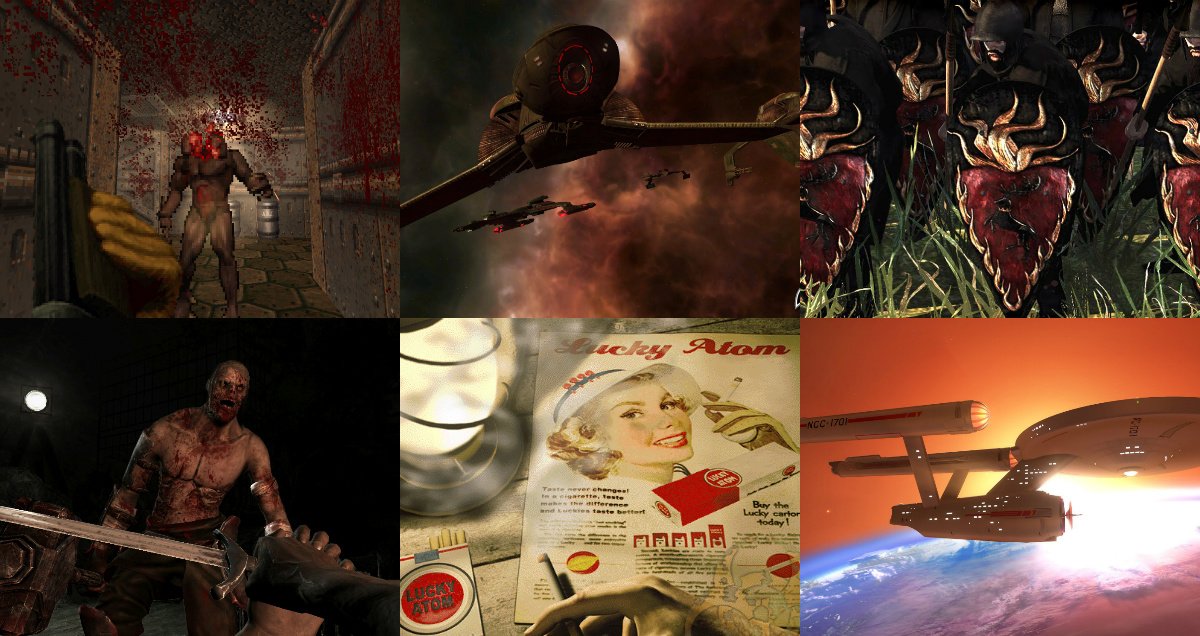 Mods are one of the best parts of being a PC gamer. Not only can they fix issues with a base game, but they can also completely change the way they're played. This year was a great one for mods, especially Star Trek ones.

Although we've chosen these six, we don't want to understate the talent and perseverance that building any mod for PC takes. These are a few of our personal favorites, but there's plenty more out there that offer just as excellent an experience as these.

If you're someone constantly in the search for more gibs, Brutal Doom 64 delivers. Doom 64 for the Nintendo 64 was a direct sequel to Doom 2, and fan theory places it as the prequel to Doom (2016). Unfortunately, the adventure didn't make it to PC until 2003 when Samuel Villarreal ripped the textures, sprites, and sounds from Doom 64 and put them into the Doomsday engine to create Doom 64 Absolution TC.

The Doomsday engine is now obsolete, being replaced by GZDoom and Zandronum. Because of this, the makers of Brutal Doom 64 have recreated Doom 64 from scratch for these two engines, while adding a huge amount of new functionality and graphical improvements. It still has the aesthetic of Doom 2, but the controls, blood splatter, and gameplay feel much more modern. For a classic Doom experience, nothing beats Brutal Doom 64, and all you need is a Doom 2 (or Final Doom) WAD to play it.

Enderal is a total game modification on a ridiculous level. This mod offers an entirely new world to explore comparable in detail and scope with Skyrim's own. Enderal is voice acted, has a new skill system and combat, experience system, and survival mechanics overhauls.

Enderal is basically like getting another full Elder Scrolls title for free. Even though Enderal is complete, the modders behind it are planning new DLC down the road for the mod, so there'll be ever more to do in the mod soon. If you own a copy of The Elder Scrolls V: Skyrim (no DLC required), do yourself a favor and grab Enderal. It's one of the most polished and ambitious mods I've ever seen, and it's a real testament to the modding community's passion.

While the Bethesda entries in the Fallout series have spread the popularity of the franchise name into the powerhouse it is today, some gamers long for the days of Fallout and Fallout 2. Fallout 1.5: Resurrection seeks to sate this desire by offering a full adventure in the vein of the original Fallout.

The mod's authors wish to convey the atmosphere of hopelessness that plagued the landscape of the wastelands of Fallout. They've done a great job of doing so in this completely original story set in the land once known as New Mexico. I don't want to spoil the story, but it's spot on when it comes to classic Fallout storytelling and lore-building. Playing Fallout 1.5: Resurrection takes me back to when I first played Fallout almost 20 years ago and packs a punch that the newer Fallout titles just can't quite grasp.

Any fans of Star Trek's gaming IPs during the days of Interplay and Activision can tell you that there hasn't been an official Star Trek game worth a damn since Star Trek Bridge Commander came out in 2002 (Legacy was okay with mods). Luckily there's been quite a few total conversion mods that have made some great games into the Star Trek experiences we wish we could have had from the officially licensed games.

Star Trek Armada III: The Final Frontier is the culmination of over six years of mod making. The Final Frontier is the last version of the Armada III mod to be released, with the team marking the mod as being complete. Few mods receive this much attention and care, and the result is that Star Trek Armada III turns Sins of a Solar Empire: Rebellion into a title that seems like it was built from the start to be a Star Trek game.

While Star Trek Armada III gives you more of an empire-building approach, the Star Trek: Continuum Mod for Homeworld: Remastered focuses on fleet composition and tactics. Though you have to collect resources, for the most part, your focal point will be massing your fleet and outmaneuvering the enemy.

Star Trek: Continuum features all the big players of the Alpha and Beta Quadrants, and allows play with ships and equipment from the Enterprise, TOS, TMP, and TNG eras of Star Trek. When it comes to a Star Trek fleet combat experience, few games can compare to this mod.

While the Game of Thrones mod for Crusader King 2 is probably the best political simulator of George R. R. Martin's A Song of Ice and Fire universe, Seven Kingdoms: Total War is shaping up to be the most faithful to the visceral side of the series. Featuring representation from all seven kingdoms of Westeros and the major houses that inhabit them, this mod is perfect for recreating the battles from the books or TV show or matching up two armies for your own version of the Red Wedding.

Those were just some of our favorite mods of 2016. We know there are a ton more out there that came out this year that are just as high quality and impressive. We commend the people who give away so much of their time and talent to give various game communities something to add replay value and extra awesomeness. Let us know what some of your favorite mods of 2016 were so we can download them.