Duke Nukem is as colorful a character as you'll meet in the colorful world of video games. In an era when most protagonists were family-friendly plumbers or space marines fluent in grunt, Duke Nukem 3D's leading man kicked ass, chewed bubble gum when it was handy, and dished out taunts as explosive as his pipe bombs.

Without Stephen Hornback, prolific videogame artist who passed away on Saturday, November 26, of a heart attack at age 62, Duke might have only kicked ass in the figurative sense of the word.

"He was the first artist ever hired by Apogee internally, and moved to our Dallas-area offices," Apogee founder Scott Miller told me. "Before being hired, we worked with him as a contractor on numerous games, like Duke Nukem 2 and Cosmo's Cosmic Adventure. In fact, I think it was Stephen who first suggested the name Cosmo, which I think was perfect for our cute green kid alien with suction cup hands."

Like most artists working in the industry during the early 1990s, Hornback had to make do with rudimentary tools.

"He worked with us when Deluxe Paint—also called Dpaint, thanks to the name of its .exe file— by Electronic Arts was the industry standard for creating game art," Miller continued. "By today's standards this was a primitive art tool and made working on art so much harder and more tedious relative to today's tools. Such were the times as the industry matured. One thing is for sure, his art did not suffer due to these older tools. And he went on to make much of the key art seen in Rise of the Triad and Duke Nukem 3D, among many other games. In fact, Duke's mighty kick was actually made by Stephen who digitally photographed his own leg, and then colorized it so that it became Duke's leg—the same leg that's kicked the ass of millions of pig cops." 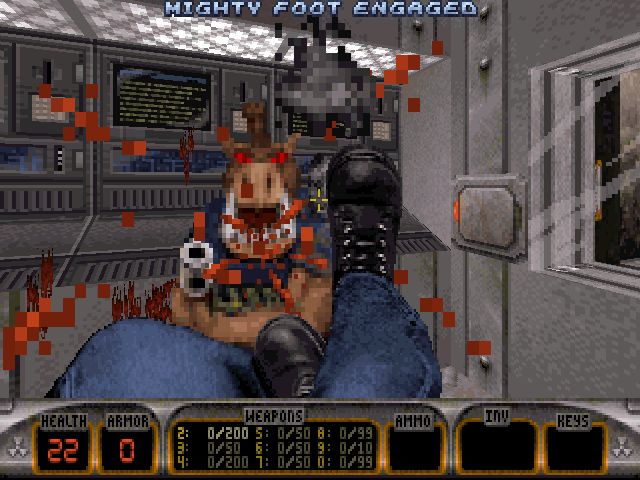 Hornback's beefy limb is only one example of his artistic talent that Apogee put front and center. When the company committed to its 3D Realms DBA, Hornback designed the iconic, three-dimensional logo that fans see when the likes of Duke Nukem 3D and Shadow Warrior boot up.

Work and play blended seamlessly at Apogee. Hornback could be as ornery as any of his coworkers, but his assiduous work ethic set a model example to which others strived.

"He was the anchor for the group. Older, more mature then the rest of us noobs," artist Chuck Jones, who worked with Hornback on Rise of the Triad and Duke Nukem 3D, told me. "He had an old school approach but he got the job done consistently. He had an explosive laugh. Quiet one minute, then the guffaw."

Tom Hall immediately recalled Hornback's trademark laugh as well. "I remember Hornback smoking like a chimney, having a hearty laugh and good humor, and working hard busting out art," he said. "He was a good guy."

The Apogee crew worked long hours that strengthened rather than stretched their bonds. Apogee Jack-of-all-trades Joe Siegler—designer, programmer, producer, QA analyst, PR rep, or customer support agent depending on the time of day—knew Hornback well enough to push the right buttons at precisely the right time.

"One thing I remember well from my days of working with him was how much fun it was to needle each other," Siegler shared on Facebook. "One of the games he worked on was Cosmo's Cosmic Adventure. Steve liked the game, but the one thing he utterly hated was the music that would play in Level 1. If you knew Cosmo, you knew what I was talking about. We had offices across the hall from each other, and when it was my turn to needle him, I would play this music. Which usually would warrant a 'SIEGLER!' being screamed from across the hallway. So in that vein, go listen to a few seconds of this link, and scream at me from wherever you are."

Although most well-known for the indelible marks he left on Apogee/3DR titles—many in the shape of a boot—Stephen Hornback poured his passion for art into games made elsewhere as well. "He was also instrumental in the development of American McGee's Alice for Rogue Entertainment," wrote fellow artist Rich Fleider in a Facebook post shared by 3D Realms.

Hornback went on to work at Ritual Entertainment, where he contributed to fan-favorite titles such as Sin Episodes and Star Trek: Elite Forces II. In 2011, he launched Soldak Entertainment and guided the creative direction of games such as Drox Operative.

Stephen Hornback is gone, but will never be forgotten. Not only will he live on in the thoughts and memories of those who knew him best, each and every title listed on his prodigious gameography cements his legacy.

"All of us who worked with you will miss you, Stephen," Scott Miller said. "You always kicked ass."

A special 'thank you' to Scott Miller, Joe Siegler, Chuck Jones, and Tom Hall for sharing their memories with the author.