Rainbow Six: Siege lays out plan for Year 2 of content

Hot on the heels of the announcement of a Rainbow Six: Siege Year 2 pass, Ubsisoft has revealed more details about what the four new packs will include, as well as some new editions of the game.

In a post on the official site,  it was revealed that the next special operators will come from Spain, Hong Kong, Poland and South Korea. Each area will get a new map and two new operators. The game plan follows the Year 1 format, with each expansion planned three months apart, starting in February  Year 1 just ended with the release of the Red Crow expansion, set in Japan..

In addition to the road map reveal, Ubisoft unveiled two new editions for the game centered around the Year 2 pass an content. The Gold Edition includes the full game and the Year 2 pass, as well as all the perks, and bonus items, and getting hands on with all the new content a week before evryone else. It is now available for $49.99 on PC and PS4, and will be available for Xbox One on December 6.

The Complete Edition comes with all of the Gold content, as well as all the year 1 DLC. It is now available for $79.99 on PC, and will be available for Xbox One on December 6. For some reason, there is no date announced yet for the PS4 version. 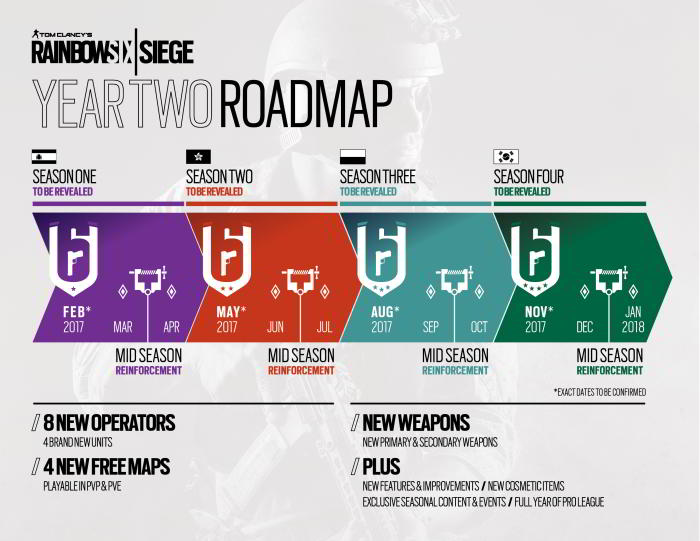