After decades of careful cultivation, Nintendo has developed a memorable brand unlike any other in the gaming industry. While the company has leaned on its wide array of iconic characters, it has sometimes been hesitant to openly embrace nostalgic doodads. The Virtual Console and Amiibos both signaled more direct targeting at those with a deep and abiding love for Nintendo, many times inspired by childhood memories of playing older consoles. It only stood to reason that Nintendo would eventually capitalize with a device built directly to tap into those 1980s memories, and the NES Classic Edition is a fitting, albeit imperfect, homage to those halcyon days.

The hardware itself is small and unassuming, a tiny and surprisingly light NES-shaped shell. It's a nice collector's piece, and even without the gaming interior it would look fine on display. It has a sharp attention to detail that recalls the old NES, even if everyone I've known has immediately attempted to open the cartridge cover flap.

Less appealing are some of the design drawbacks that become readily apparent as one unwraps all of the connected parts. The included HDMI cable is incredibly short, to the point that I had to strain the cables to connect it into my TV while also plugging the system into a power source. Worse yet, the controller cable is only a couple of feet long, which makes it difficult to sit a proper distance from the TV. Already third parties are jumping to provide their own solutions where Nintendo fell (very literally) short, but this is a design problem that should have been resolved out of the box.

Staying close to the NES box ends up being somewhat of a necessity, though, if you plan to skip around to different games. The Reset button on the console jumps back into the menu, which means the controller itself has no mechanism for going back to the menu. This appears to have been done for the sake of authenticity, but it's one area where a little modernization actually would've helped. A small, inconspicuous button built into the back of the controller would have been fine.

Aside from that complaint, though, the authenticity does shine through. The NES controller felt correct to my memories, right down to the satisfying clack of the face buttons. This may have been the most important aspect to nail, and was the one I was most concerned about before trying the system for myself. Software emulation is commonplace and the system looked alright, but if the controller felt even slightly off, the entire experience may have been tainted. Fortunately, it plays pitch-perfect, at least when subjected to the light testing of a review.

Inside is a few-frills presentation that steps aside in favor of the library. It allows a few different display options, but that's far from the system centerpiece. The library is the real star here, and that's by design. Tastes may differ, but it's difficult to argue that roughly a dozen of these aren't formative classics from the 8-bit era, making this as much a history lesson as a micro console.

The list of undisputed classies includes most of Nintendo's own best-known debuts: the full suite of Super Mario games, The Legend of Zelda, Metroid, and Punch-Out, alongside third-party classis that helped put publishers on the map, like Castlevania, Ninja Gaiden, Final Fantasy, and Mega Man 2. 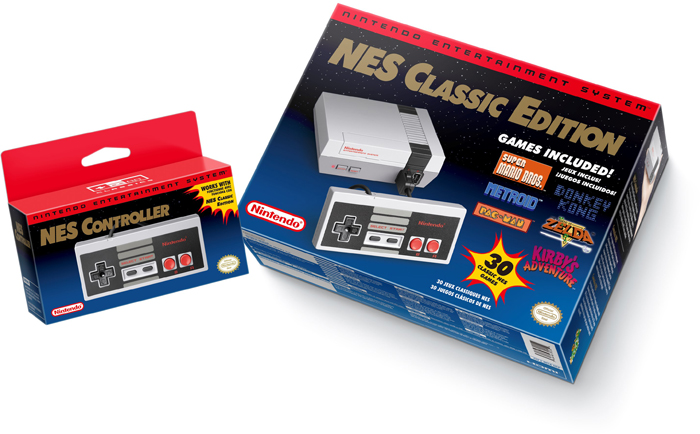 That's not to say there aren't a handful of clunkers. Simon's Quest and Ice Climber have aged pretty terribly, and it's hard to argue that Donkey Kong Jr. belongs in the pantheon alongside the rest. Others might only appeal to a certain tastes, like Tecmo Bowl or Excitebike, which I never connected with at the time and now seem even more obtuse. Despite those, the library is a very solid time capsule of the 1980s, and Nintendo deserves credit for such careful curation of its back-catalog.

All that said, many gamers may have already bought all the games that matter to them through the Virtual Console, and most won't make the time to plumb the depths of every single game in the collection. It provides a trip down memory lane, but it's one that is likely familiar to those of us who never left video games in the first place. So while it may be a neat collectible, it's hard to say whether it will be all that useful for someone steeped in the medium. More than likely, it would provide some temporary enjoyment and then go on a shelf. That may make it better suited to lapsed players who haven't seen Nintendo's various shifts over the years but certainly remember their good times "playing Nintendo."

Whether as a collectible showpiece or a revisitation, the NES Classic is beautifully simplistic. It does exactly what it needs to, with a minimal level of fuss, and that's more than can be said for the a la carte Virtual Console. While some aspects of the hardware could have been more thought out, it's an easy recommendation for serious and casual players alike, and a symbol of the enduring legacy of Nintendo.