Ever since Demon's Souls set the world on fire in 2009 and Dark Souls was embraced by an even bigger audience two years later, developers have attempted to emulate FromSoftware's firm-but-fair gameplay template by spinning off Souls-likes of their own. In ZombiU, players control a character until they die, at which time their old avatar turns undead and must be killed by their new incarnation to retrieve their gear. Salt and Sanctuary offers a 2D interpretation of the formula.

Team Ninja's Nioh, a samurai-themed title due out later this year exclusively on PlayStation 4, hews close to Dark Souls, while simultaneously offering a fresh take on From's conventions by speeding up combat and injecting it with greater tactical possibilities.

At a glance, many of Nioh's mechanics appear nominally different. Players leave behind gravestones instead of bloodstains when they die. Shrines function as checkpoints instead of bonfires, and also let you spend Amrita (aka souls) gleaned from defeated foes and treasure chests. Stamina is known as Ki, believed by Chinese philosophers and physicians to be the body's life force. Attacks come in quick and heavy varieties. Even the UI looks blatantly similar.

Then I equipped a sword and tussled with a demon, and the differences leaped off the screen.

Weapons in Nioh can be wielded in three ways: high, low, and middle stances. High attacks are powerful but slow, low attacks are quick but weak, and middle attacks split the difference. Enemies change up attacks, so you can either react to their posture, or keep them on their toes by swapping from high to low to middle and back again to keep them guessing, or stick with the weapon and stance you prefer. Swords work better with low stance, letting you dart in and slice before dodging out of range, while heftier weapons like staves and axes lend themselves to the heavier blows of high attacks. And targeting enemies reveals their life and Ki bars, giving you valuable insight as fights progress.

Attacking drains Ki, as it drains stamina in Dark Souls. Unlike Souls, Nioh doesn't want you to wait to press your advantage until you've caught your breath. A split second after performing an attack, blue energy swirls around you—a manifestation of your Ki leaving your body. Tap R1 at just the right moment, and you'll pull that Ki right back in, replenishing your stamina instantly.

The ability to reclaim stamina right after spending it revamps combat dramatically. Every swing and thrust has weight, like in Dark Souls. But the way Ki replenishment keeps you in the fight, spliced with Ninja Gaiden's blistering pace, gives rise to a satisfying and joyful loop—unleash a combo, mash the Ki regen button, and keep hacking away, over and over until your enemy folds at your feet. 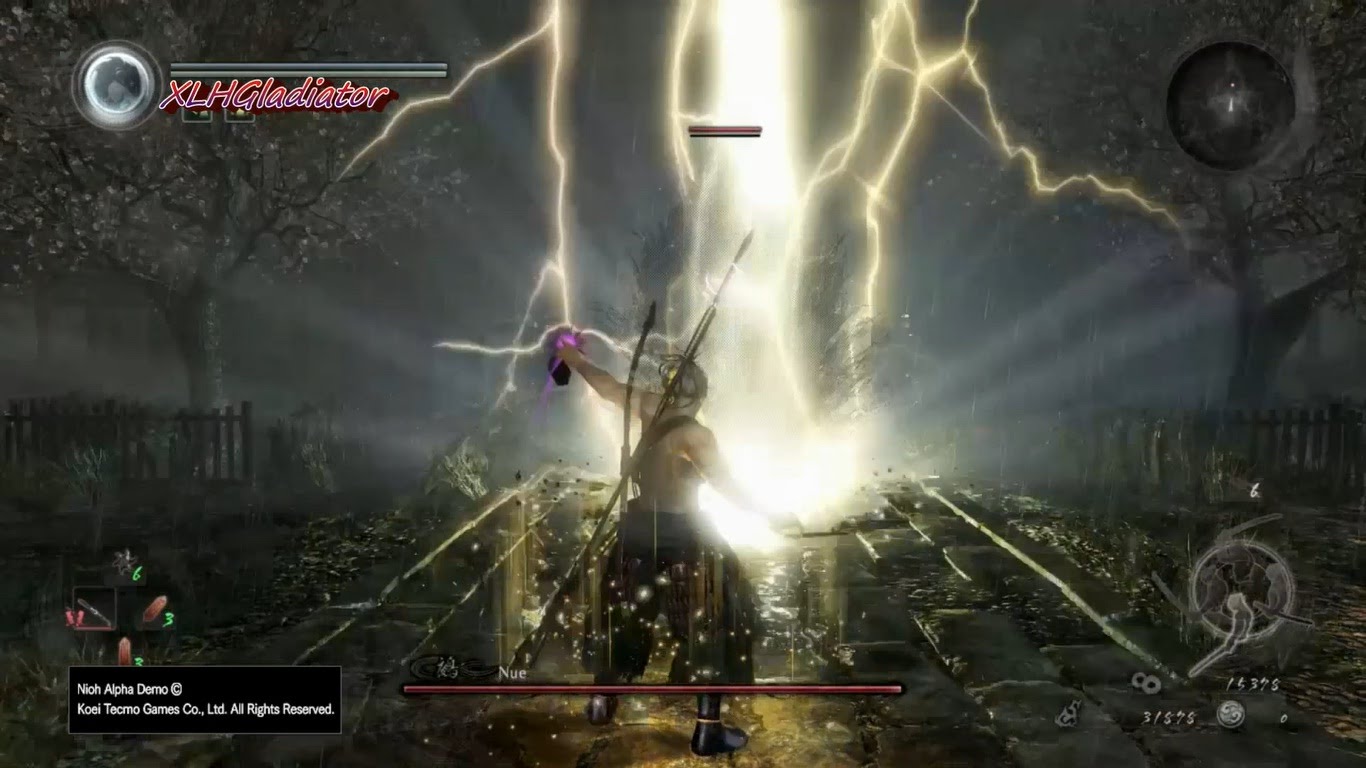 Other elements introduce variables into combat to prevent you from growing too complacent using one stance, weapon, or combo. Save up enough energy and you can transform into a Guardian Spirit, deific entities that grant passive bonuses such as increased attack rating as well as active benefits like unleashing lightning strikes or wreathing your weapon in fire.

More interesting, however, are enemies. Most enemies exude malefic energy in a radius around them. Bigger foes have larger radii, and you'll have to step into the energy in order to get your licks in. Entering the radius saps your Ki regeneration, all but forcing you to perfect the timing of regaining spent stamina or dodge out of range and onto normal terrain so your bar can refill at its normal rate.

As someone who's poured over 1,000 hours into the "SoulsBorne" titles, I think I'm qualified to say that while Dark Souls 3 still made for a good time, it also felt a little stale. Nioh got me excited. It's not a carbon copy of one of my favorite series; instead, it sharpens familiar elements, making them leaner and faster. It's something the same, yet something different, and I'm excited to play more.

This Nioh preview was based on a pre-release PS4 build of the game at an event where refreshments were provided by Koei Tecmo.