To be completely honest, I wasn’t sure what to expect from the guys at Sparkypants when I first stepped into my appointment at E3 last week. I enjoy RTS games, and sometimes MOBAs can be fun, but I’ve never really found the game that just pulls me into the mix, and really keeps me coming back. At least, not until now.

In Dropzone you are given control of three characters, which you have to control using standard RTS controls. You can select the entire group, single out one character, or double up and send the third character scouting. It’s a unique twist because the RTS style is blended perfectly into the MOBA-like arena, giving the game such a unique take to offer its players. 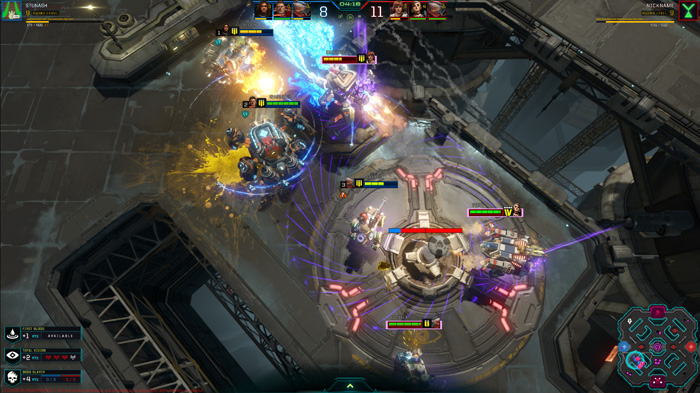 During my special hands-on demo, I was actually set against one of the members of the Sparkypants team, due to there not being any other media members to take me on. I was more than happy for the challenge, because this guy knew the game a lot better than I did, so I picked up my mouse and keyboard, and hopped right in. We selected our heroes, and were off. The objective of the game is different than other MOBA styled games. Instead of attacking the other player’s core, you go around the map taking out Hive bases, which reward you with Orbs that you then must deliver to the center of the map.

This is where things can get tricky. While you are uploading the Orbs to the Uplink in the center of the map, your character is vulnerable, and unable to defend itself. So you’ll need to make sure you have your other units set up to defend it. It’s easily ten of the most intense seconds I’ve experienced in a game like this, and I couldn’t help but feel like my opponent was going to come bounding around the corner any second.

There are also several Vision Towers set up around the map that players can capture, which allow them to see what’s going on in that area without the fog of war showing. These are extremely crucial to your match progress, because without any of them captured, you become completely blind, the map covered in a dark fog of war. It is one of those things that is always in your best interest to pay attention to, if for no other reason than to possibly allow yourself a glimpse into the enemy’s movements.

It was through one of my captured Vision Towers that I noticed my opponent slinking towards the Uplink, an Orb strapped to the back of one of his heroes. He’d taken a few cuts and bruises in his fight against the Hive, the alien enemies scattered across the arena, so I figured I'd head to the center and attack him from behind, and hopefully manage to pull off stealing his Orb. My plan was a huge success, and I managed to score one of the three Special Objectives in the match for First Blood. Of course, my lead only held so long, and my opponents' superior knowledge of the game, the characters, and how it all works eventually led to my downfall. 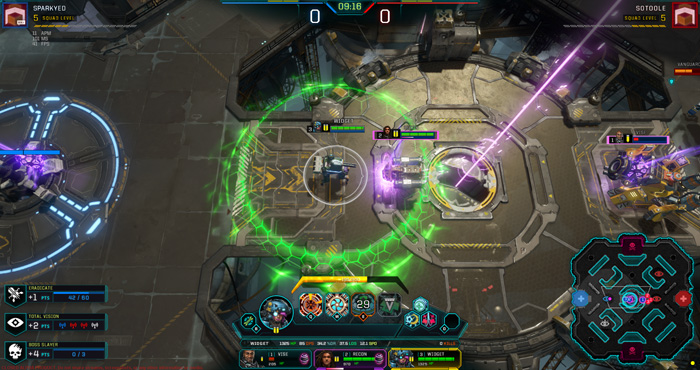 But I never once felt like I was at a disadvantage as a new player, which is a huge thing for any RTS or MOBA to achieve. Which is part of what makes Dropzone such an interesting endeavor. On the surface it feels like any RTS or MOBA, but deep down, in the guts of the game, the amount of depth and love given to this project really shine through. The character customization is rich, allowing multiple ways for players to loadout their characters, and the three player character system really seems to have been finely tuned to work well within the confines of the game’s mechanics.

The most interesting thing about Dropzone, however, is the scoring and timer system. Each game is played over fifteen minutes, the winner of the match chosen by whoever has the most points at the end of the round. This is an interesting idea, not only because it gives players an idea of how long these matches will take, but because it works so well. It gives players the perfect amount of time to upgrade their characters, and score a good many points, while also giving players a timer to play to, forcing them to think on their feet, and act more quickly.

But what makes Dropzone so unique? It's not the MOBA-like elements that litter the game maps. It's not the rich character customization, or the well-thought out upgrade paths that each character has. It isn't even the unique three player character system that draws so heavily upon the inspiration of years of playing RTS games. No, the thing that really makes Dropzone so unique, is the fact that it strives to be something different. Instead of simply hopping onto the MOBA train, and trying to ride it into station, Sparkypants Studios has taken the entire idea of a massive online battle arena and turned it into one of the most intense one versus one arenas I've ever had the chance to experience.

Dropzone may be part MOBA, but deep down, in the guts and glory, it's all RTS, and it feels good.