E3 2016: How The Legend of Zelda: Breath of the Wild breaks the Zelda mold

Thirty years ago, Nintendo's original Legend of Zelda made heads spin by introducing a quest so large you couldn't solve it in a single sitting. Twelve years after that, Ocarina of Time set numerous benchmarks for 3D games, including lock-on targeting and a vast, interconnected world.

This week, Eiji Aonuma pulled back the curtain on Breath of the Wild, the next chapter in the series and, according to Aonuma, the next seismic shift in franchise conventions. Many elements have been refined; others overthrown by brand new ideas.

Here are just a few ways Breath of the Wild is poised to revolutionize The Legend of Zelda--and perhaps open-world design as a whole.

Previous Zelda subtitles such as Majora's Mask and Twilight Princess referred to people or things of significance to a game's story or mechanics. Aonuma chose Breath of the Wild to draw attention to the central role Hyrule plays in this new adventure.

Fruit grows on trees, gusts of wind can spread fire from cookpots to dry grass, wild horses can be tamed, and enemies sleep, hunt, and go through other motions of their own accord. In Breath of the Wild, you'll inhabit a Hyrule that will force you to react, rather than the other way around. 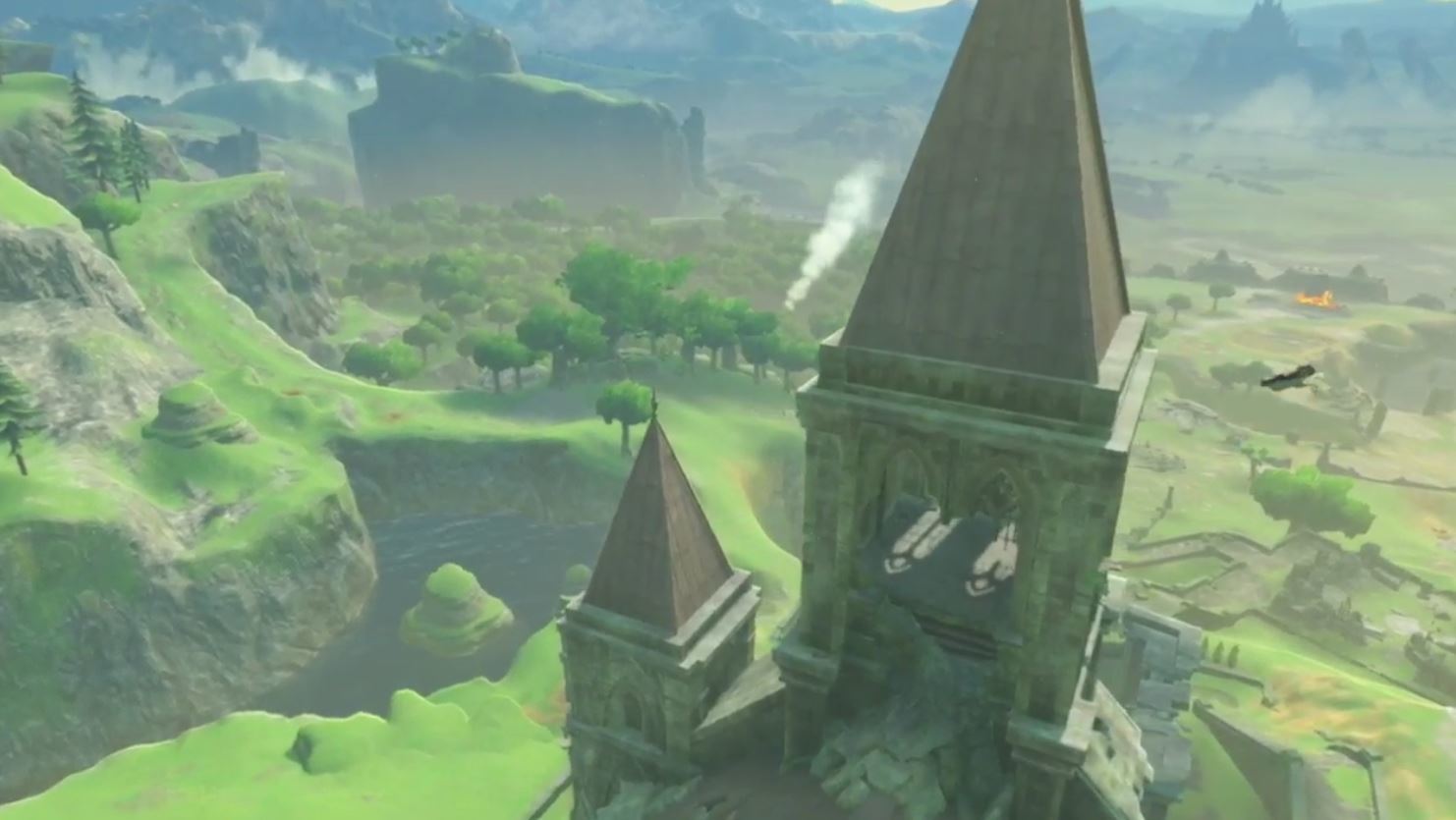 Nintendo's hands-on demonstration opens on a dark screen and an accented female voice bidding Link to awaken. Is it Zelda? Maybe. Probably. But that doesn't matter. What does matter is that characters in a Zelda game will finally speak beyond battle cries and shrill commands to WATCH OUT! and LISTEN!

Some characters, though not all. Link meets a mysterious old man after leaving the dwelling where he wakes up from his century-long nap, but this NPC's dialogue only appears in text. The game's still nine months away from release, so it's possible Nintendo hasn't finished recording or implementing voicework yet.

I'd be fine with Breath of the Wild adopting an uneven split between text and recordings. Using voices sparingly will lend those instances greater weight.

Zelda II: The Adventure of Link dipped the franchise's toes in the RPG pool by way of stats you leveled up through combat. In Breath of the Wild, Zelda dives in head first. Weapons degrade with use and deal a critical strike before breaking, items such as tree branches and woodcutter axes can be used in a pinch to attack enemies, scavenge clothes that exhibit unique properties, and consumables can be cooked in assorted combinations to concoct elixirs that boost stats such as stealth and Link's stamina gauge.

Speculation has arisen from weapon degradation. The final shot of Nintendo's reveal trailer shows the Master Sword sheathed in a pedestal tucked away deep in a misty grove. Assuming the Master Sword can't be broken (nor should it), retrieving it could reduce or negate the role of makeshift weapons like tree branches as makeshift weapons--serving as a clear indicator that you've reached a major milestone in the game. 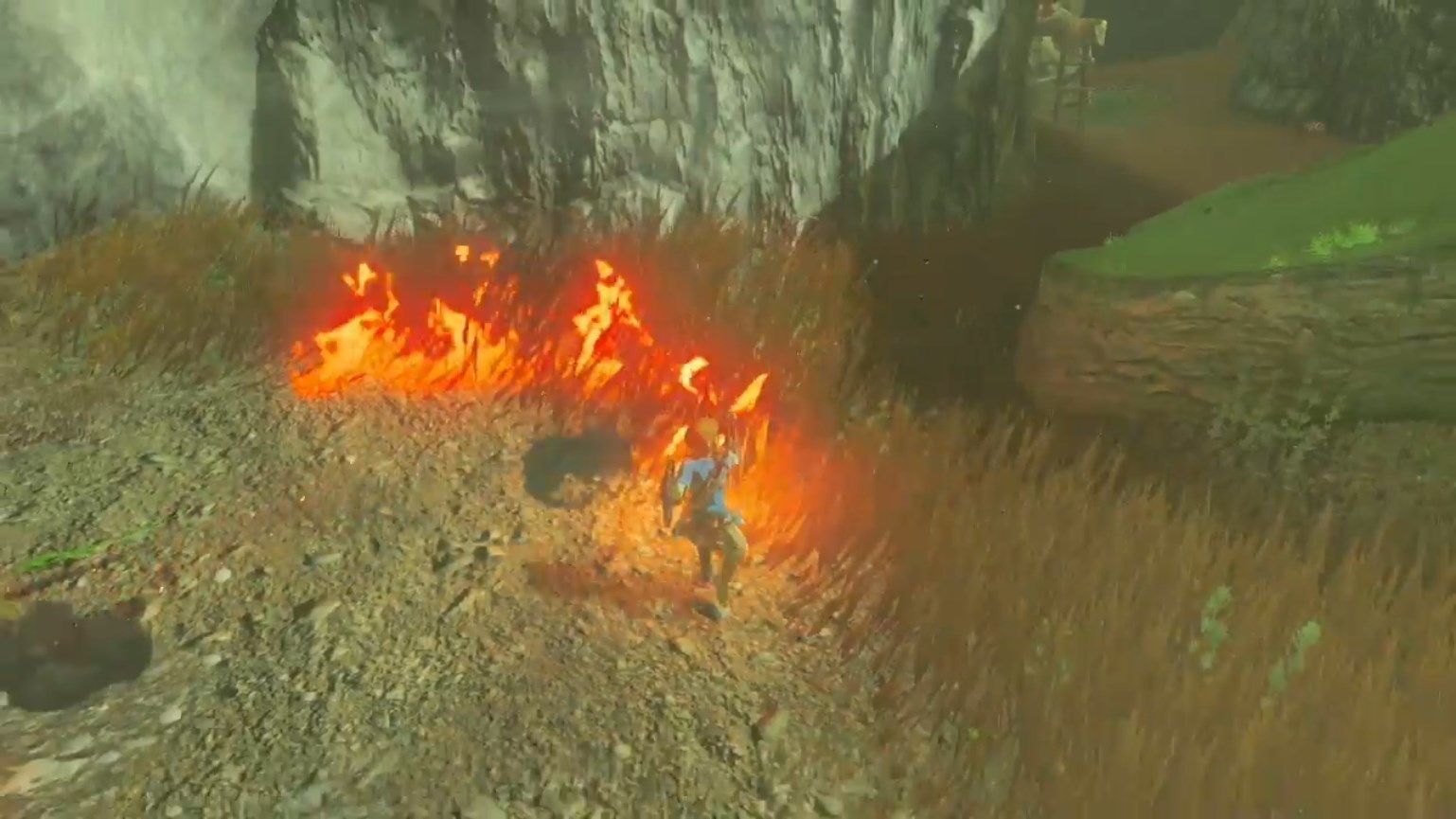 Don't expect to be able to smash pots and cut grass to find hearts when you're in a jam. There are no hearts in Breath of the Wild. To recover health, you'll have to find or cook meat, or eat apples. Link grows cold in snowy regions until you clothe him in thicker garments or build a bonfire. And bonfires can rage out of control if a stray gust of wind spreads the flames into dry grass.

One lesson I learned the hard way is that Link can no longer take flying leaps off cliffs of any size and skirt damage by landing in a roll. Instead you'll have to pick your way down to the ground or after retrieving a paraglider that functions similarly to the Deku Leaf-like parachute in Wind Waker.

Don't worry: Breath of the Wild's physics aren't out to get you. You can harness them to solve puzzles and pull off amazing stunts, like the way Valve's Source engine facilitated realistic puzzles in 2004's Half-Life 2. One popular GIF making the rounds online features Link setting a fire to create an updraft, leaping off horseback, riding the updraft using his paraglider to gain even more altitude, and then whipping out his bow to fire an arrow into the eye of the Octorok-like Guardian monster below him.

Ocarina of Time gave players two ways to get more items: find them out in the world, or buy them. The Hylian Shield could be found in a crypt below a gravestone in Kakariko Village, or bought from a vendor. All you needed were rupees, available in such abundance that most players maxed out the highest wallet size before the game's halfway point.

Although Nintendo promises that rupees are present in Breath of the Wild, I didn't find a single one during my 40-minute demo. And even if I had, I wouldn't have known what to do with them. What do I need with rupees when any heavy object I pick up can be used as a weapon, and tunics and trousers are contained in crates and treasure chests?

My guess is that Link will come across vendors later in the game able to perform services only money can buy, such as reinforcing items to prevent them from breaking, forging some of the suits of armor Link can wear, or imbuing equipment with special properties.

The second-most obvious departure from convention, apart from voice acting, because it's made clear early on: technology has permeated the Zelda universe. Link regains consciousness in a glowing pod, uses a Sheikah Slate that overtly resembles a tablet, and fights monsters that seem partially cybernetic.

Trivia buffs know that technology nearly fused with Hyrule's high-fantasy world much early--at the genesis of the series, in fact. Shigeru Miyamoto envisioned The Legend of Zelda as a science fiction game where players collected electronic chips instead of golden triangles, and traveled back and forth through time to solve puzzles and complete dungeons.

It will be interesting to see how technology will affect moment-to-moment play in Breath of the Wild remains to be seen, especially given that players appear to spend early hours learning primordial lessons like how to create fire and cook food.