NASCAR Heat Evolution will hit the track in September

The NASCAR Heat franchise is returning to the track in September after a 15-year absence.

Dusenberry-Martin Racing tweeted about the revival, announcing NASCAR Heat Evolution for PS4, Xbox One and PC, coming on September 13. Monster Games, which created the original NASCAR Heat back in 2000 and NASCAR: Dirt to Daytona in 2002, will be the developer.

The game will offer 23 tracks, and let players race as their favorite Sprint Cup Series driver, although a roster of drivers is not currently available. The game will have a Career Mode, as well as a Chase Mode that focuses on the last 10 races of the Sprint Cup season. Challenges will also return, letting players duplicate or even change moments from this past racing season. Monster is also promising a new AI and Speed Rating system that will adjust to the player's skill level.

The game, which is available for pre-order on the official site for $59.99, will name its cover driver after the Sprint All-Star Race at Charlotte tomorrow, according to Polygon. Apparently, the choices are Toyota drivers Denny Hamlin, Martin Truex, Jr., Kyle Busch, Matt Kenseth, and Carl Edwards.  The company has created mockups of all the possible winners: 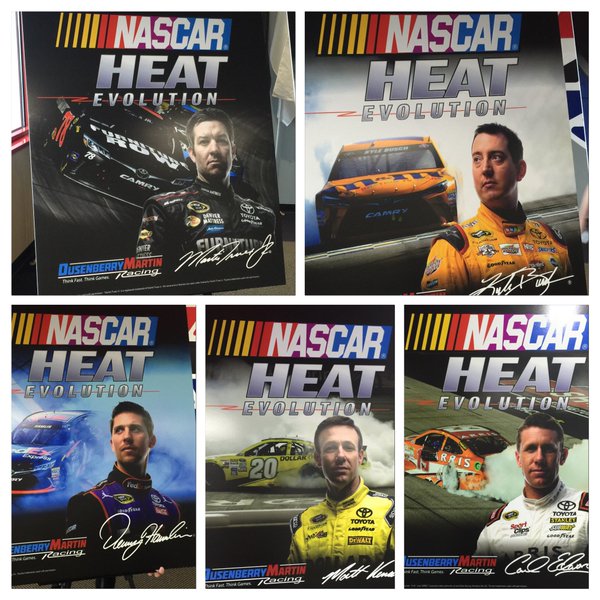 NASCAR as a licensed property had been conspicuously absent from the video game scene for some time until 2011. Electronic Arts had acquired an exclusive license to make stock car racing games with the NASCAR name soon after Dirt to Daytona was released, but abandoned it in 2009. Eutechnyx put out five NASCAR games from 2011-2015, but they were not of the quality of the original NASCAR Heat. DMR, which is essentially the video game arm of NASCAR, acquired the license early last year, and has promised to bring back stock car racing to the level it was back in 2002.