Let me get this out of the way right here, I never played the original Hard Reset. After my time with it at Pax, I am happy I finally got to experience it, albeit in its updated form. It plays like the classic shooters of old, like Quake and Unreal Tournament, with some new school dressings.

Hard reset has a plot, but you can pretty much ignore it. The build we played didn't have headphones on the loud show floor, so we couldn't really hear the protagonist chatting with the person guiding him, but that really didn't matter much. The game shines when you are creating mayhem and demolishing enemies in spectacular fashion. Get shot by an evil robot? Go find a green powerup on the map. Run out of seeking rockets? Dash around your enemies and find some ammo boxes laying in the corner, and look for some false walls with secret shiny collectibles hiding beyond them. The game is very clearly going for a Serious Sam / Painkiller vibe, and that isn't a bad thing. In fact, some of the team at Flying Wild Hog worked on the original Painkiller, and the fellow we interviewed, Tadeusz was a user of Shacknews in the early Quake days, so clearly these guys know classic shooters. 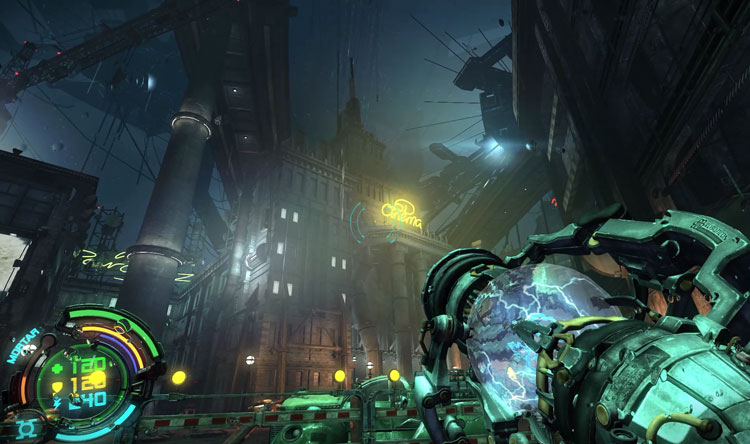 The original game had two weapons, but the most recent version adds some new tricks, like a katana and all new dashing system. The dash system definitely adds to the quick "blow everything up" gameplay, as you can avoid enemy attacks and then get to making real pretty explosions with your weapons and their Republic Commando style attachments. You can also use the agility to get up close and personal with your soon to be dead foes only to dispatch them with sweet sweet katana action.

Andrew took some time to chat with Tadeusz Zielinski to talk about Hard Reset Redux, which you can view below.

Hard Reset Redux is a love letter to classic style shooters, with some shiny upgrades that makes it fun for anyone who likes blowing stuff up in style. There isn't a hard release date yet, but Tadeusz told us the game will be available "soon, not even soonish, but really soon." Let's hope he means it.