An unknown world of magic hides just beyond reach in our modern cities. It cannot be accessed by merely anyone. It cannot be seen in its entirety at any one point. It’s elusive, underground, and practically invisible. Such is the premise for The Unspoken, Insomiac Games’ latest VR title utilizing the controls and features of the Oculus Touch.

“You can never quite get a good look at [the world], but it’s always there,” creative director Chad Dezern explained in his initial announcement presentation.

“It’s a cryptic symbol spray painted on the side of a subway train. It’s a homeless man whispering to a pigeon beneath the highway underpass. It’s a chanting voice barely audible over the electric hum of a street light. This is the dark and dangerous world of magic, and f it draws you in, you’ll never escape.”

Within this secret world lies a host of magicians and spell casters ready to throw down in epic magical brawls beneath the Chicago urban expanse.

According to Dezern, there’s a specific magic about Chicago that makes it the perfect setting for a game about magical PvP battles. The history, the stories, and even some of Chicago’s technological attractions make it a seemingly unlikely landscape in which magic casters thrive and engage in battles of dominance.

“It turns out the 1893 World’s Fair [in Chicago] has a lot of significance, because for many visitors, it was the first time they’d seen electric lights and moving pictures,” says Dezern.

“A lot of people came away saying they had just seen real magic. And in our timeline, it turns out they actually had, and the fallout from that original display has caused a lot of fractured infighting in Chicago.”

This infighting sets up The Unspoken’s intense player versus player competitive battles, Dezern explains, because different ideologies set up for a gangland-style magic war in Chicago’s dark underbelly. 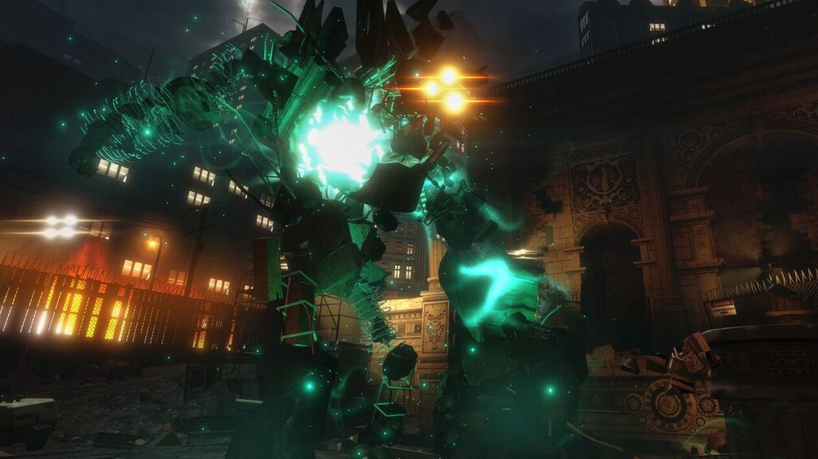 The creative team’s vision for The Unspoken started when they first began tinkering with the Oculus Touch motion controllers. Once they saw the 1:1 technology behind it, a competitive PvP spellcasting game suddenly made a lot of sense.

“We really liked the idea of wizard duels,” says Dezern. “Our minds went there right off the bat, because we thought a lot about how we could let a match escalate while you’re one-upping each other. Each spell is a little more powerful than the last, and every single match ends in this culmination of magic everywhere.”

While there will be practice modes using AI bots as opponents, the core of The Unspoken is heavily focused on player-versus-player matches involving the use of spells and battlefield navigation.

From the second I strap on the Oculus headset and launch into the game, I’m struck with how present and aware of my own physicality I am. I’m standing on pillars of varying height, all of which tower above as the ground crumbles and gives way to the depths below.

My hand moves in near perfect unison with my actual arm, rotating and turning at the same time. The first spell I cast is a baseball-sized fire ball with a charge function when held in my right hand for more than a few seconds. It curves above the target as I launch it, eventually arcing around to strike dead on. There’s some auto aim here to help improve the precision of throwing such a small object, but it does nothing to rob me of the satisfying feel.

I’m armed with three more spells in my loadout, accessed through a star chart-like radial menu appearing before me when I turn my left hand palm up. Each spell has a different function, and like all of the weapons found in Insomniac’s past games like Ratchet and Clank and Sunset Overdrive, some of them are especially inventive or different.  Dezern tells me the team has plans to put twenty-five or more spells into the game for players to choose and select for use in their loadout.

“It feel like [creating weapons] is as much of an editing process as anything to figure out which ones will go together and feel like a varied arsenal with real use. We also want them to be novel, like things that you might not see or expect,” he says.

“So, there’s a real sense of discovery when you’re trying something out. You’re not exactly sure what’s going to happen sometimes.” 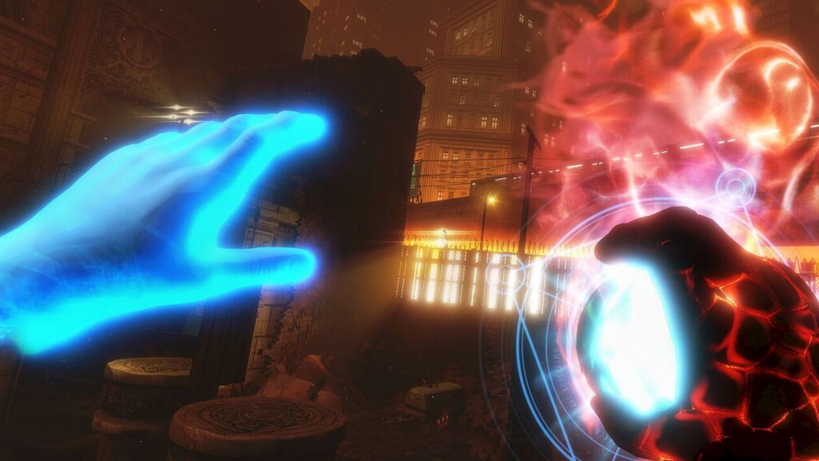 The game provides little clues as to the nature of some spells, leaving me to discover their value simply by experimenting. I select a massive, Mjolnir-like hammer from the menu. In my hand appears the hammer, and an anvil with a cryptic, red-hot marking appears. I strike the marking, a satisfying clang ringing out. The marking re-appears on a different part of the anvil. I strike again. Two more strikes like this, and I’ve used my magical blacksmith skills to fashion a flaming javelin capable of shattering shields and doling out plenty of damage to my enemies.

Another spell appears in the form of a piece of paper. I select it, then receive a series of circular prompts to touch around the paper as I hold it in my right hand. I touch one. A corner folds. I touch another. A corner on the opposite side folds. Several more touches, and I’ve folded a paper airplane that, once thrown, turns into an old-fashioned bomber and crashes into my opponent to deal max damage.

Each spell is designed in this way; it’s cryptic at first, but discovery and implementation allow you to gauge which best suit your play style.

I’m also stricken with how tactile and physical each of the spells feel in my hands, despite not actually being there at all.

“It’s been a balancing act of ‘here’s a prompt from the real world object [and] here’s how we can make it feel like a spell,” Dezern says of the team’s work to make each spell have weight and a sense of presence and “feel” in the player’s hands. 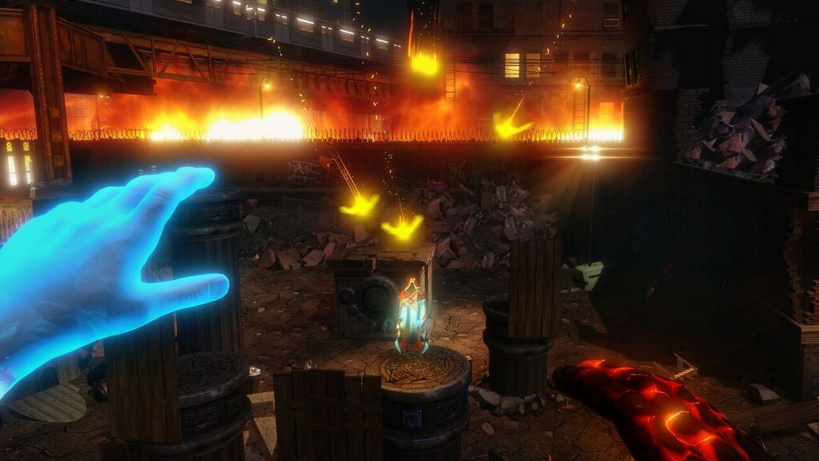 “Let’s bring these things together so that it’s all of the groundedness of real objects and all of the grace of spellcasting coming together.”

To keep spells balanced between the players, Dezern and his crew have paid attention to the way each spell functions, ranging from the time it takes to cast to how many shards have to be collected in order to cast a spell. While these battles will ramp up in significance and majesty, they still need to remain accessible to all.

I’m practicing selecting and casting new spells when the announcer points my attention to another player within the arena. Using a teleport function to jump from pillar platform to platform, I avoid his spells, equipping and firing off my own right back. It’s thrilling to blink from post to post as I dodge threatening arcane energy and remain mindful of destructive cover. There’s real strategy here, and while some spells are more mundane than others, I find most of them have very distinct benefits for use.

After a solid ten minutes, I’ve finally whittled away at my opponent’s health until he’s officially defeated. He winks out of existence, and I’m left in the arena to celebrate my victory. It doesn’t last too long, however, as I’m given the okay to launch back into a new PvP match as soon as I exit to the main screen. Hopefully the multiplayer holds up for a substantial amount of time, because I’m impressed with the breadth of options while also slightly worried about a possible dip in online play on an already highly exclusive platform like the Oculus Rift. Of course, time is our only option for a definitive answer, and in the meantime, I’m cautiously optimistic about what the secretive, dangerous world of The Unspoken has to offer.

The Unspoken is targeting a holiday 2016 release exclusively on the Oculus store.