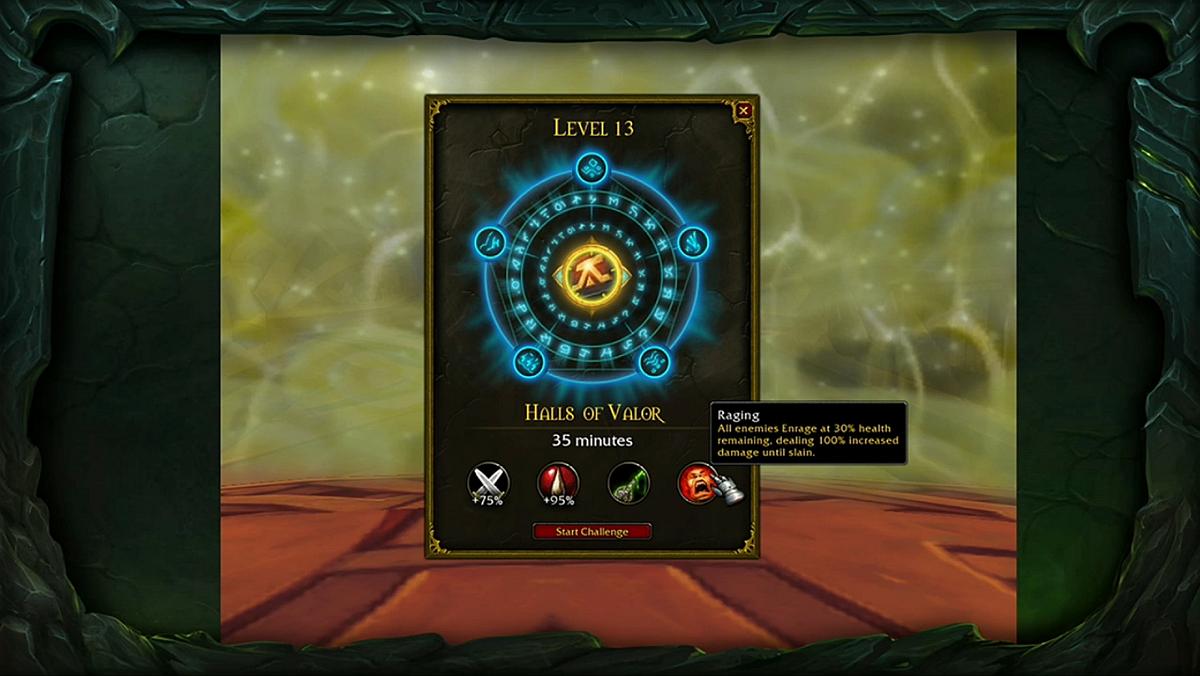 Blizzard alerted World of Warcraft players at BlizzCon last year that the upcoming Legion expansion would revamp challenge mode dungeons, something many players greeted with enthusiasm. Gone will be the current gold, silver and bronze runs, replaced with Diablo 3-like keystones that give each dungeon a specific element that players will need to practice to master.

According to a video from FatBossTV (via Kotaku), the new Mythic+ Dungeons, for lack of a better name apparently at this point, are now live for testing on the Legion Alpha servers.

The way it works is that players will find challenger keystones and use the keystones on a pedestal as they enter the dungeon (see the top image via MMO Champion). The keystones are tied to specific dungeons and have different attributes, which will make the dungeon behave differently. For instance, a keystone could force a boss to enrage when it hits 30 percent health, or players will continuously suffer damage as they make their way through the dungeon. In the video, we see others that cause the boss to have more hit points and damage, while another gradually decrease the threat that a tank will generate. At BlizzCon, other possibiities mentioned included enemies bursting into flames on the ground when they die. Keystones will also bring varting degrees of difficulty, with the higher level stones offering greater loot rewards.

Although it isn't clear how it will be implemented in the final game, Blizzard has said that there will be different challenge modes to master each week. And these modes will apply to all the dungeons eventually, making them scale up proportionally, not scale down. The idea will be to focus on genuine progression and not rushing through at a breakneck pace, Blizzard has said. However, there is a timer involved, and if the dungeon is beaten within that time, the keystone is leveled up to the next difficulty and players will be able to keep them.

Again, it's all a work in progress, but it definitely looks like a good change to the current mediocre system. And if you want to see what is available on the alpha server for testing, Blizzard will be updating the infographic below on a regular basis.