Hearthstone next big expansion, Whispers of the Old Gods, will be wrapping its tendrils around the community in about a month. There's plenty to be revealed in the meantime, though. To keep pace leading up to the launch, we're taking a fresh look at all the new card reveals every Friday. 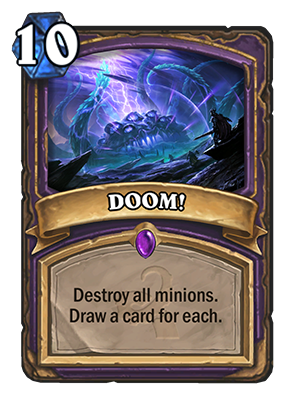 Spell: Destroy all minions. Draw a card for each.

The conventional wisdom among Hearthstone players is that at 10 mana, a card needs to essentially win you the game. Cards like Deathwing or Rafaam's big swing spells are valuable enough to claim that, but DOOM! may not be. It could prevent you from losing, and the card advantage is certainly a big effect, but it's hard to tell where this spell fits.

That's partly because card draw is not traditionally a problem that Warlocks struggle with. The Life Tap ability keeps Warlocks flush with cards so much that one deck type, Handlock, relies entirely on it. DOOM! would be an essentially dead card in Handlock decks, since the overdraw would likely burn their own cards.

It could be useful as an emergency escape hatch for more aggressive Zoo-type Warlocks. If you're only left with one or two low-cost cards in hand and your opponent has stalled into the late game with bigger minions, you could wipe them out and refill your hand to flood the board all over again. But, since it eats up all your mana, you're giving them the initiative before you can start playing minions again.

DOOM! would be an incredibly valuable card in a class that struggles with card advantage and runs out of steam, namely Hunter. But in a Warlock deck, it's unlikely to ever be needed, so don't expect to see it in many decks. 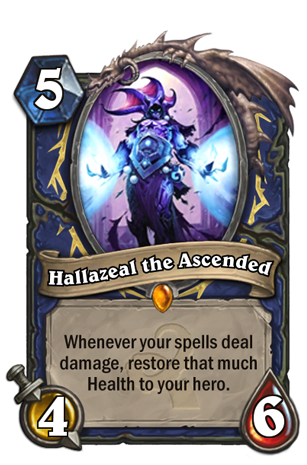 Whenever your spells deal damage, restore that much Health to your hero.

If any class needed a strong Legendary, it's Shaman. Thanks to an unpredictable Hero Power and an Overload mechanic that's difficult to design around, the class has never run in the most competitive circles. The recent addition of Tunnel Trogg made for a powerful Aggro Shaman that could usually even outpace Hunters, but that still leaves many of its more mana-expensive cards unused.

Hallazeal could open the door to a strong Control Shaman option. Dealing damage and healing simultaneously is a strong enough effect that your opponent will likely target it immediately, but as long as you save it for a later turn you can pop off some powerful Overload spells to get the full effect. You could conceivably clear the board, heal yourself for quite a bit of Health, and have a 4/6 remaining when the dust settles. Paired with Lava Shock, you can use those cost-efficient Overload spells and then unlock the crystals while healing yourself for another 2 Health.

We have yet to see the other Shaman cards, but this is a big step in the right direction. 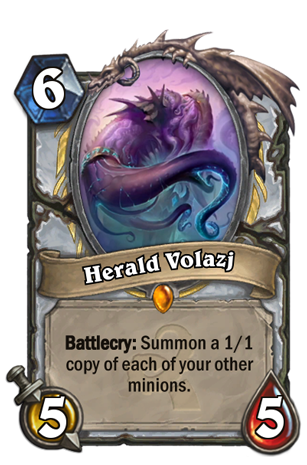 Battlecry: Summon a 1/1 copy of each of your other minions.

Like last week's Forbidden Shaping, it seems aimed at helping Priests with their distinct lack of minions. This one copies everything you have on the board, making them 1/1s. That means if you have three minions already, you can play Herald Volazj and get a full board with miniature versions of the rest of your board.

However, the copies will retain the card text on any of your existing minions, so the real strength comes in copying any special effects. A big Taunt minion will get copied to a mini-Taunt, a minion with a Divine Shield will be a smaller pain that requires two hits to deal with, etc. Better yet, minions with special end-of-turn effects like Ragnaros, and Deathrattles like Sylvanis or Sludge Belcher, will be extremely powerful to copy.

All that said, getting maximum value out of your Herald will mean having a pretty advantageous board state before you play him. That means he may be something of a "win more" card. 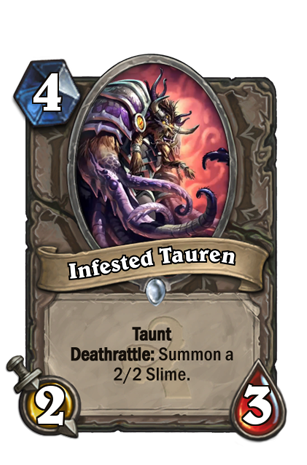 With Sludge Belcher preparing to leave Standard rotation, Blizzard is providing what looks to be a much worse version of it. To start, 4 mana for a 3-health minion is terrible. Sludge Belcher didn't have a high attack value, but its 5 health matched its 5-mana cost. Secondly, while Belcher spat out a second, smaller Taunt as a Deathrattle, the Infested Tauren doesn't specify that its Slime has Taunt. It's just a regular 2/2 minion.

On paper, this all seems fine. You're paying 4 mana for 4/6 in stats across two bodies. But by turn four, dealing with a 2/3 minion and then a 2/2 minion is far too easy for your opponent, and you're sacrificing a huge amount of tempo by putting such a weak minion onto the board. Sludge Belcher immediately became a staple in most competitive Hearthstone decks. Infested Tauren won't. 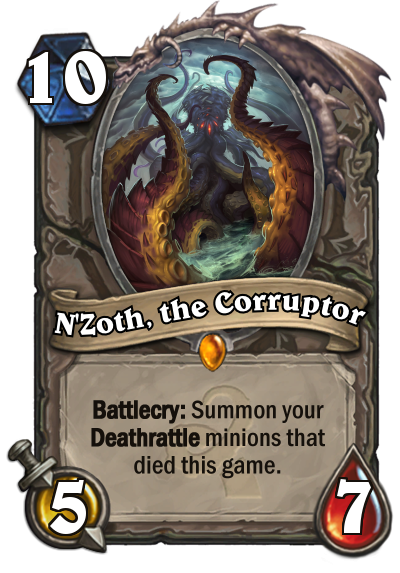 Battlecry: Summon your Deathrattle minions that died this game.

And here we have our second of the Old Gods! While C'Thun will be free for simply logging in during the launch period, N'Zoth will have to be found or crafted the old-fashioned way. As noted for the DOOM! spell, a 10-mana card needs to swing the game in a serious way to be worthwhile. N'Zoth may just fit that bill, but you'll definitely have to build a deck around him. As long as you've used a Deathrattle-heavy deck, it can provide tons of value.

Cards like Sylvanas are often the target of Silence, and while it's possible to bring her back by dropping Kel'Thuzad at the right moment, that can be tricky to pull off. Blizzard has confirmed that N'Zoth brings back any Deathrattle minion that died, even silenced ones, so this is a more surefire way. It picks them randomly, though, so if you play too many Deathrattle minions you may not get the one you want revived.

N'Zoth will be slightly less powerful in Standard than in Wild, since the rotation of Goblins vs Gnomes means the ever-popular Shredders are going out of style. Still, even as small an effect as summoning Sylvanas and Harvest Golem would make for a whopping 14/16 in stats. It's almost like the Warrior Legendary Varian Wrynn, but you get to exercise more control over what it summons. This one stands to be appropriately huge. 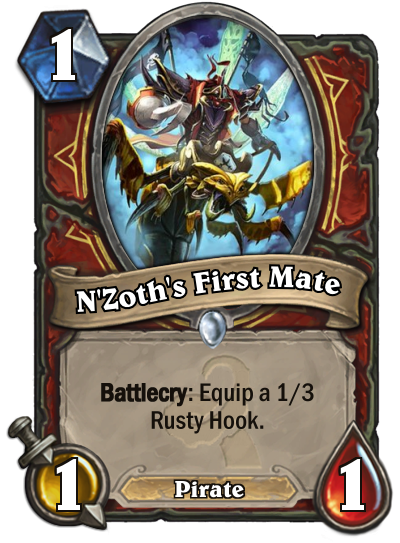 Another class card seemingly intended to fill a mana hole, N'Zoth's First Mate actually gives Warriors something to do on their first turn. A 1/1 minion is weak in stats, but equipping a 1/3 weapon can be compared most aptly to the Paladin's Light's Justice. That weapon costs 1 mana itself, making this a favorable option on the whole.

Its real potential lies in powering up the weapon using cards like Upgrade and Orgrimmar Aspirant. With a little planning, it could essentially become a more durable Fiery War Axe, with a minion or two attached for good measure. And since it fills an often vacant slot for Warriors, it's likely to see a good deal of use. 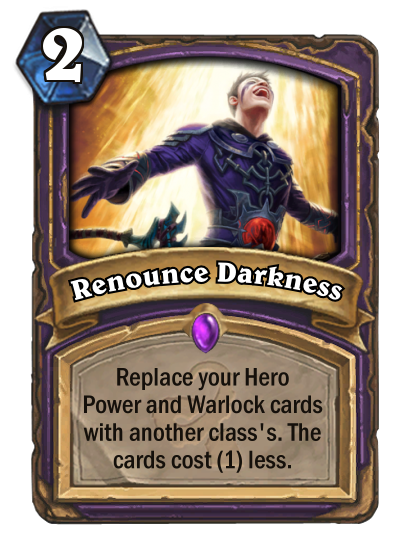 Spell: Replace your Hero Power and Warlock cards with another class's. The cards cost (1) less.

Once in a while a card packs such a crazy effect that it's okay that it's probably not competitive. Such is the case with Renounce Darkness, a card with a huge effect but that appears to be too random for serious play. It's not listed as a Discover effect, so you'll have a random class chosen for you from the eight remaining. The deep discount is overpowered, but you never know what you're going to get.

We're bound to see some wacky experiments with this, as well as players figuring out the proper balance of how many Warlock cards to place in their deck for replacement, and when exactly to break it out. It's certainly going to make playing against Warlocks unpredictable for a while, but it won't be a staple for Legend ranks. 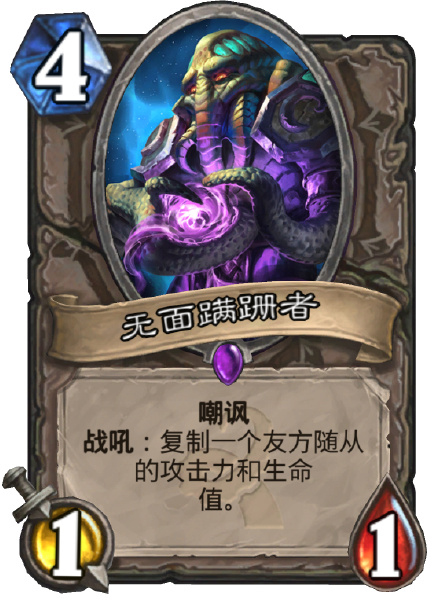 Taunt. Battlecry: Copy attack and health from a friendly minion.
(Note: Based on a fan translation from a Chinese stream reveal)

Unlike Infested Taurent, this card stands a good chance at stepping in to fill Sludge Belcher's slimey shoes. If you have any reasonably hearty body on the board, you can use this to put a minion that's just as big down too. Four mana is a reasonable cost for any minion with at least 4/4 in stats, but the potential exists to make a 4-mana 8/8 with taunt. That's quite a value.

Combine it with cheap, temporary buffs like Power Overwhelming for Warlocks, and it can quickly get absurdly big. That makes it a likely inclusion for the Handlock deck type, which is always looking for new ways to stall into the late game and doesn't mind sacrificing a minion or two in the process. Its one downfall is that it's especially vulnerable to Silence. While most Taunt minions at least keep their stats when silenced, this one would get demoted to a piddling 1/1 and stop being a threat altogether. 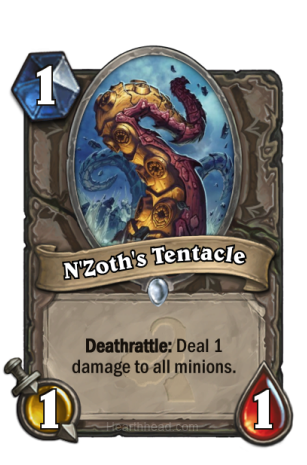 Deathrattle: Deal 1 damage to all minions.

Explosive Sheep is getting a slimy sibling thanks to an Old God. N'Zoth is very likely one of the four Legendary Old Gods promised in the expansion, so this gives us the first look at one potential effect. It's entirely possible that N'Zoth will create an array of tentacles as a Battlecry or Deathrattle.

However, being part of Blizzard's reveal cycle implies this is a standalone card. To that end, it has some solid if not exactly revolutionary applications. Mages have used the Explosive Sheep as a cheaper board clear than the more expensive Flamestrike. The lower damage of the Tentacle could make it a natural fit for Warrior decks, which could use it alongside Whirlwind to do lots of ping damage to minions at once. That would synergize well with Armorsmith, Frothing Berserker, and the nerfed-but-not-dead Grim Patron. 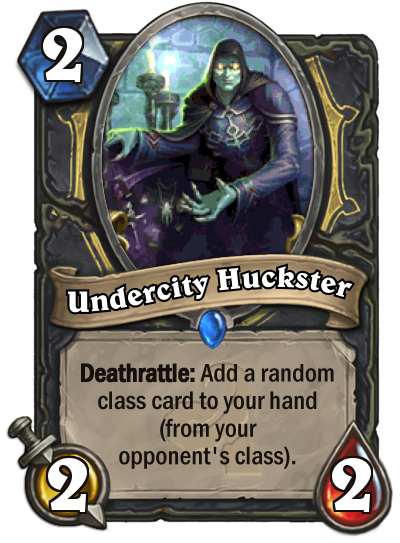 Deathrattle: Add a random class card to your hand (from your opponent's class).

Burgle is a fine card for its cost, and now we get to meet the Huckster doing all that burgling. While its effect is slightly reduced, offering only one card instead of two, it's attached to a decent vanilla body. Rogue two-drops tend to be fairly reactive spells, or combo cards like Defias Ringleader that aren't very good on their own. Undercity Huckster gives you a chance to play something on turn two without a coin, which gives you instant value.

On the other hand, the random element means you could get a clunker. Undercity Huckster at least assures you get a body out of the deal, but don't be surprised if once in a while you end up with a Sacrificial Pact.