Going Hands-On Inside Valve's The Lab

Shacknews was able to get a behind closed doors demonstration of Steam's latest VR software, The Lab. The Lab will launch for free with the HTC Vive with 12 separate games within a laboratory inspired by the Portal series. It was the most delightful experience I have had with the HTC Vive and it could very well be the equivalent of the Wii Sports for Steam and HTC at launch.

After strapping on the HTC Vive head-mounted display and putting on the headphones and controllers, I was instructed to grab a translucent globe at the center of the grid-based menu room with the controller and put my face inside of it. I was immediately transported to the top of a mountain. Valve has used photogrammetry to capture a real life peak of a mountain, Vesper Peak. Out of the corner of my field of view, I noticed an adorable little robotic puppy. At my feet there were sticks that I could grab and throw using the Valve VR controllers' triggers.

I proceeded to play fetch with my new robotic pal for a few minutes. A feature in The Lab demo is teleport. You are able to hold down the touchpad and point to a location to jump to it. This solves a problem with making open world environments that are larger than the 10 by 10 foot demo rooms. Teleport functions a lot like the Epic Games demo Bullet Train. After teleporting around Vesper Peak for a few minutes, I had soaked in the scenery enough and another translucent globe appeared. I said goodbye to my robotic puppy pal, I grabbed the globe and placed my head inside again.

I was transported to what looked like some sort of futuristic Amazon automated warehouse. The demo is called Slingshot and it had me laughing hysterically. The demo has the player standing atop a platform with a slingshot in front of them. Each time the slingshot is loaded, you are greeted by a self aware robotic sphere. My favorite was the sphere that was very into global warming. Justin Roiland, of Rick and Morty fame, had lent his voice to the robotic spheres and had me in stitches. 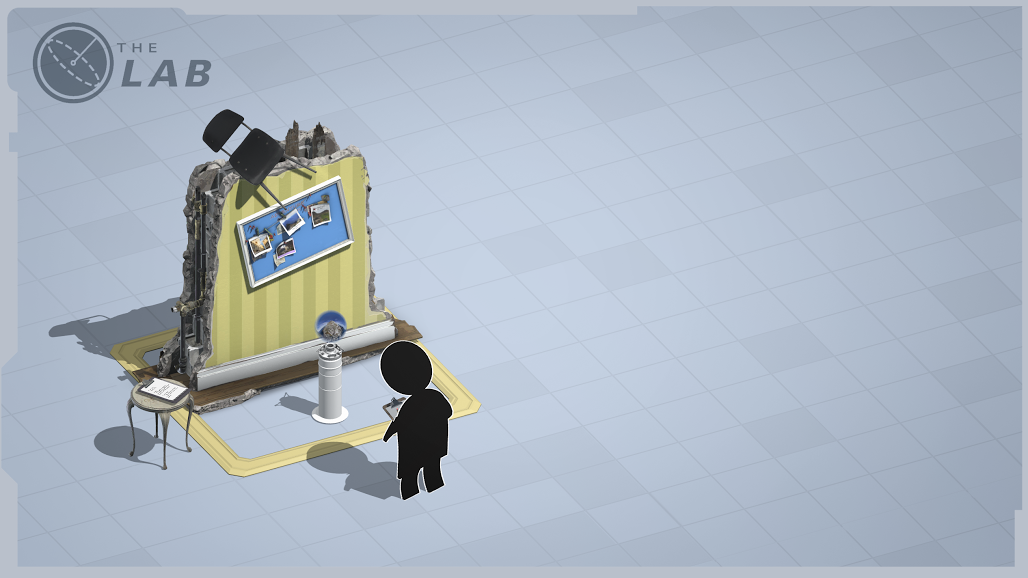 You proceed to shoot your new robotic sphere pals across the warehouse in an attempt to topple stacks of boxes. There are explosive barrels and different combo blocks that make the experience really enjoyable. The accuracy of the slingshot was striking and you can really pull far back on it and shoot at various angles. There is a counter on the right of you that provides a total dollar amount of damage done. It was truly a fun and hilarious experience. Another translucent globe appeared in front of me, so it was time to slap it on my face again.

I was transported into what felt was a tiny room with a space ship. The game is called Xortex and it is a 3D space shooter. The game began and various sized enemies appeared. You hold the spaceship in one of your hands with the controller and can move in any direction. There is a persistent laser being shot in a straight line from your ship and the majority of the experience involves dodging enemy projectiles and zapping them with your laser.

As the level progressed, more enemies came into the environment. I got to the first boss which looked like a miniature Death Star. I really enjoyed the simplicity of Xortex's gameplay and how they were able to take something so minimal and make it very exciting and involved. After a few minutes of blowing up enemies it was time to go jump to the next demo. Yet another translucent globe appeared in front of me and I slapped it to my face.

The last demo I was able to experience was Longbow. This was a more cartoony environment with enemies that looked like the cousin of Nintendo's Mr. Game and Watch in style. This demo revolved around defending your castle from a horde with your trusty bow and arrow. My instinct was to close one eye when aiming, but that doesn't work too well in virtual reality. It was definitely a fun demonstration of another way to use the Vive controllers in VR. Much like PS Move, or Wii Motion Plus before them, this was a more physically involved game. The feeling of immersion took it to a whole other level as my heart did start to race as enemies neared the gate. It as definitely a fun demo, but sadly I had one last globe to slam into my face.

I was transported back to the hub of The Lab. This will be the place from which players will jump to the 12 different experiences. There will also be content unlocked inside of the hub as you progress through different games. The Lab could very well be the Wii Sports of HTC Vive's launch lineup. It has a number of fun games with serious replay value. It is all packaged up with the trademark humor of some of our favorite Valve franchises. I did ask one of the developers of The Lab if we would see future standalone Valve franchises make there way to VR, and he just smiled and nodded. Half Life 3 not confirmed, yet. In the meantime, The Lab will provide HTC Vive early adopters with a bunch of really fun activities that showcase the platform's strength.