Fallout 3 was a revolutionary experience. Fallout 4 is not. I feel compelled to address that upfront because, if Fallout 4 has one shortcoming, it's that the extremely long hiatus has resulted in a less ambitious sequel than I had hoped. Simply put, the handful of improvements and one significant new system make this feel more like an iterative sequel than the long-anticipated return of one of Bethesda's most celebrated series. There's nothing necessarily wrong with another Fallout game in the vein of its predecessors, but as much as I enjoyed another visit to the Wasteland I couldn't help but feel slightly underwhelmed.

The one major addition here is a crafting system, which is so robust and well-integrated into this framework that it feels like it should have always been a part of it. In previous Fallout games, players had to develop a sense for which items were worth keeping and which could be safely passed by. That meant the vast majority of items were set dressing or bits of contextual storytelling that had little to contribute to the gameplay. This changes all that, with just about everything you find in the world being useful for crafting, or at least usable once you scrap it for parts.

In turn, this system distributes itself through several new sub-systems: weapon and armor crafting and modding, Power Armor modifications--even the ability to create a bustling township complete with working lights, automated defense systems, and settlers willing to take on different roles. The town building also plays into the addition of the Minutemen faction, a group of do-gooders who recruit and ultimately follow you with the ultimate goal of building safe havens for the citizens of the Commonwealth. 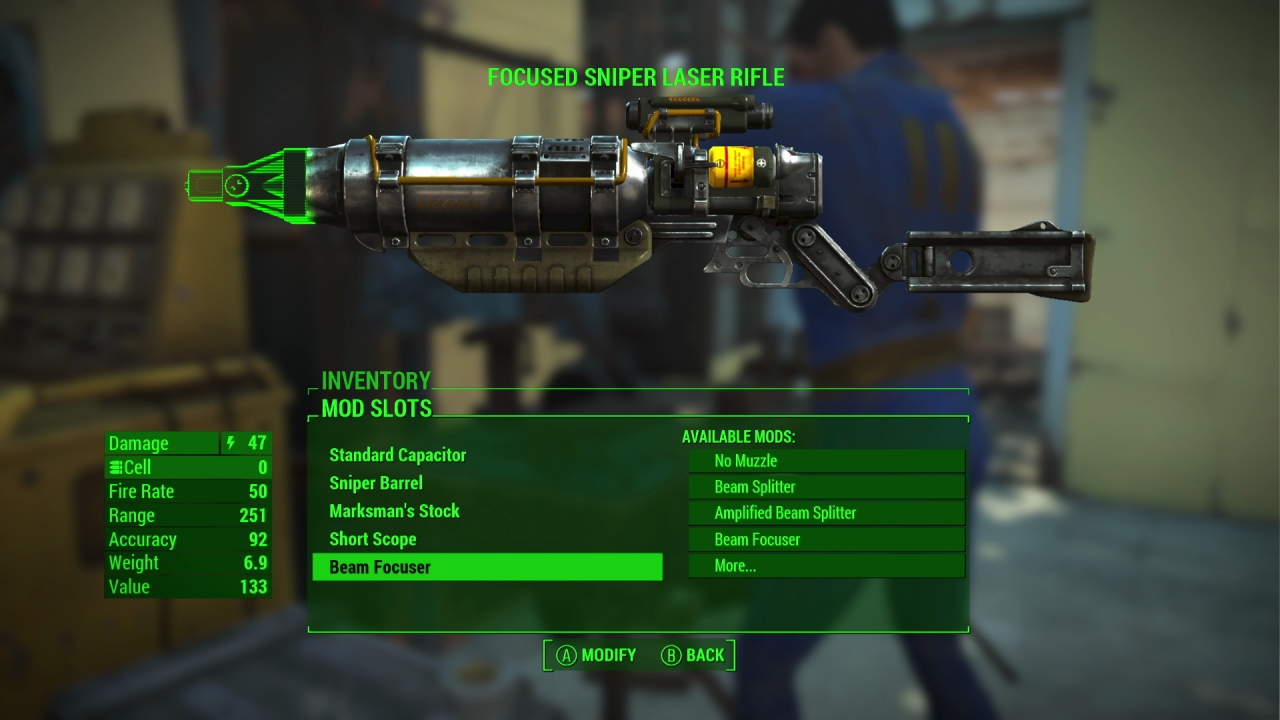 All of this really changed the way I engaged with the world for the better, by making scavenging feel more substantial. I found that I felt accomplished after putting some time into the crafting, since I always had something to show for it, be it a markedly improved weapon or a village full of grateful wastelanders.

With the ability to craft your own weapons, the all-important loot drops from enemies might have felt useless if not for the addition of Legendary enemies. These randomized, extra tough versions of standard creatures and raiders tend to drop "Legendary" loot with special attributes, like a boost to the VATS system or an automatic slowdown effect when you're low on health. Being decked out with lots of Legendary gear definitely feels empowering, since all the extra effects work together to make you a terror on the battlefield.

The story is also much more engaging, based mostly on its central premise. Rather than a bland cipher, this game puts you in the role of a parent. After being shuffled into a Vault and cryogenically frozen, you're awoken temporarily to see your infant son kidnapped. The quest to find him and those responsible for taking him is the driving force behind everything that follows, and the female voice performance (I played as the mother) tinged the appropriate grief and anger into every conversation that turned to her missing child. 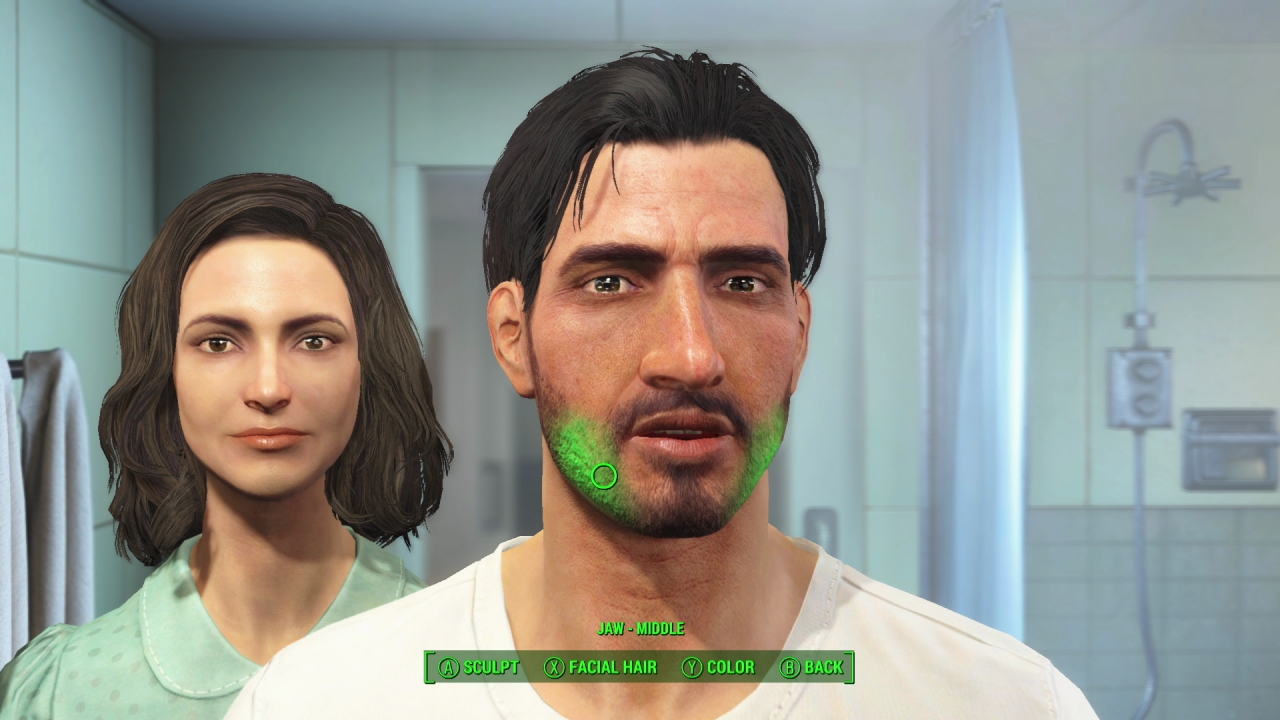 In the course of that personal story, your wastelander becomes embroiled in a war between multiple factions, each with their own points-of-view on how to properly maintain order in the Wasteland and the responsible use of technology. Discovering these factions and the intriguingly gray morality behind them is one of the joys of the game, so I'll steer clear of spoilers. Suffice to say I sided with the one I identified with the most and still felt uncomfortable with some of our ends-justify-the-means actions. Fallout certainly still has a way with ethical quandaries.

All of this centers around the new setting of Boston and the surrounding area, called the "Commonwealth" in Fallout lore. The setting is always the shining centerpiece to any Fallout game, letting us step into a familiar area ravaged by nuclear war, beasts, and scavengers. Bethesda capitalizes on the new area well, introducing a litany of Massachusetts locales with their own wasteland twists. The area of Boston itself is especially well-realized, as the city proper is dense with buildings and points of interest that contrast sharply with the more sparse townships surrounding it.

These new additions are much appreciated, but built on a foundation that feels a little too familiar. The engine is easily recognizable as a slightly modified version of the one we've seen, complete with jerky animations, stilted face-to-face conversations, and occasional pathing or A.I bugs. My favored A.I. companion hit a dialogue cue as if I'd taken him to a location, when in actuality we'd both been taken there by another party.  At one point I got stuck in geometry and could do nothing about it but reload. Another time the game crashed entirely. In the climax, I experienced severe framerate drops.

Plus, some legacy oddities remain, like the inability to fast-travel from inside most buildings. I was forced to frequently exit a building, wait for a loading screen, then hit my fast-travel target and wait for another loading screen. How is that still in this game after seven years? All of this gives the sensation that the game is struggling to keep up with its own systems, like a clock wound too tightly and threatening to snap a spring at any moment.

As the first Fallout game of the new generation, it does look markedly better than the old games, but don't take that to mean it can go toe-to-toe with this era's best and brightest. Fallout was never particularly beautiful, making up for its visual shortcomings with an unmatched sense of scale. That remains the case here, with a remarkably massive area to explore that looks merely so-so on the whole. Both from a technical and visual standpoint, being a Fallout fan has historically meant living with those compromises, and this entry doesn't change that.

Those technical considerations were minor nuisances, however. I felt underwhelmed because in contrast to Fallout 3 and New Vegas, I never felt enraptured in this living, breathing world. Those games stand out to me because all of their systems worked together to make a magical unpredictability that helped the world feel alive. In the seven years since, we've seen those systems imitated and innovated, and we all more-or-less understand how the machine works. Fallout 4 adds one new system, but it's transparent by nature, and the revisions to the old systems are slight. As a result, nothing here makes the world feel alive again by today's standards the way Fallout 3 did in its day.

Back to the Wastes

Fallout 4 is exactly and precisely more Fallout. Its couple of new gameplay elements are well-executed and enrich the experience, but they don't make this feel especially different than the Wasteland we were exploring almost a decade ago. If you enter looking for a heaping helping of the Fallout action you already enjoy, and an enthralling romp through a newly realized portion of the Wasteland, this certainly fits the bill. Just don't hope for another revolution, because like war, the Wasteland apparently never changes.

This review is based on a PlayStation 4 retail copy provided by the publisher. Fallout 4 will be available in retail and digital stores on November 10, for $59.99. The game is rated M.