IndieCade 2015: The best of this year's nominees

IndieCade is home to some of the best and most celebrated efforts from the indie gaming community. It's a place for not only new games and new faces, but also for new ideas, some of which even stretch beyond the parameters of traditional video games. Shacknews was proud to attend this event, once again, and spent a good portion of the weekend checking out some of the best of the weekend's games. 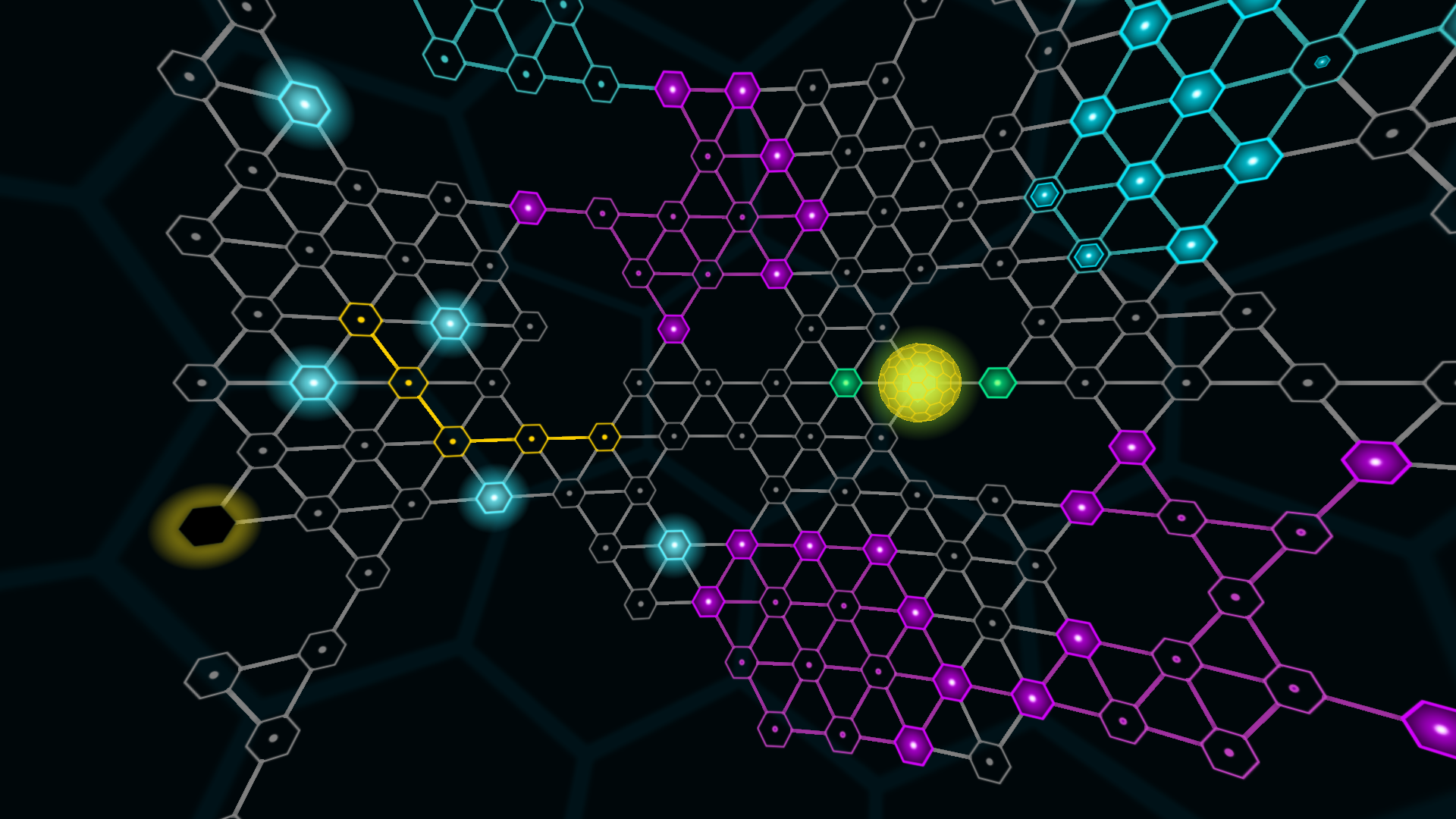 This one will look familiar to many VR enthusiasts. This is a virtual reality puzzle game from solo developer E McNeill, first revealed in late 2014. This puzzler has grown quite a bit since then, putting players into virtual space as it has so often been represented in pop culture. With the grid at their fingertips, the idea is for players to plant a virus into antivirus nodes that then spread to a central core. There are several other antivirus nodes that are in the way, so this must done in a certain number of turns. If adjacent nodes bump into one another, they'll cancel each other out.

Spreading viruses to adjacent nodes along the vast network web is simple enough and I didn't bump into too many issues with my nodes colliding with one another. The difficulty appears to come in as the puzzles get bigger and as the time limit gets smaller. There are some other available tools to help out, though I didn't get to try those out with this particular demo. I didn't have too much time with this one, but was certainly a novel take on the VR puzzle game and one that could get its hooks into you quickly. It's definitely worth taking a look at, just for the take on cyberspace that many people imagined as impressionable kids. Fortunately, there's a demo available on the Darknet website.

Also, the voice of the system is Jon St. John, who players will recognize as Duke Nukem, which is quite the bonus! 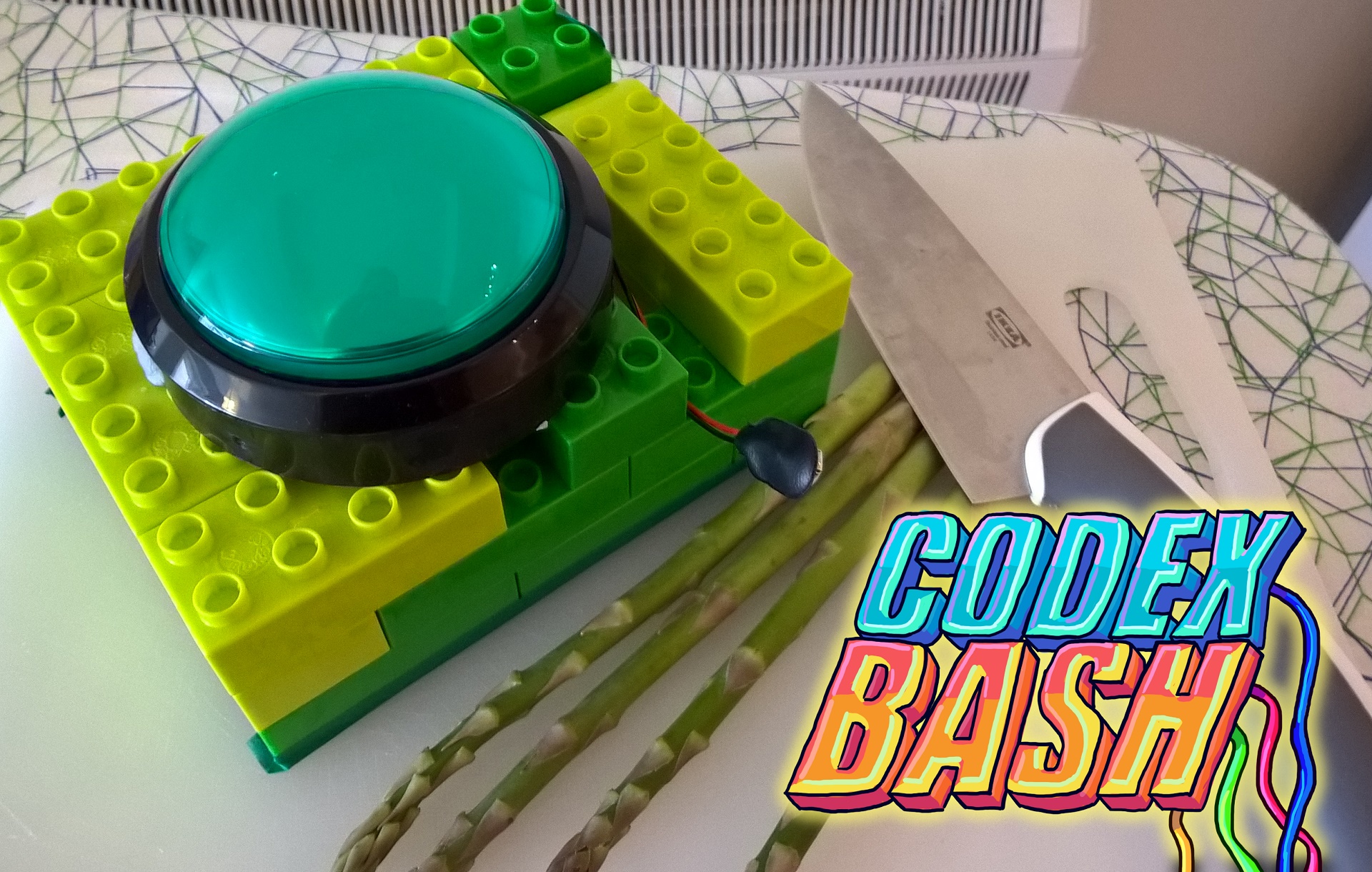 This is an interesting effort from solo developer Alistair Aitcheson. Codex Bash mixes together a PC interface along with several physical gaming elements to create one giant lateral puzzle. The idea is that the PC is connected to four large colored buttons. Players are presented with a series of puzzles, with solutions all connected to the buttons. The buttons must be pressed in the right sequence to proceed to the next step, but players only have a set amount of time to complete the whole puzzle.

This is a nerve-wracking piece of work in the best way. Some puzzles require pattern memorization and picture association. There's another puzzle that requires looking at physical lists of fictional characters to see which one is associated with which button. The individuals puzzles are incredibly clever and they lead to some tense moments. It definitely gets one worked up if they try and approach it solo, so it was unsurprising that I later saw groups attempting to crack the nut themselves.

These are my favorite types of IndieCade games, as they go so far beyond the realm of traditionanal games to create an entirely new experience. Codex Bash was incredible fun and even if it'd be a cumbersome PC or console setup, it's a game that I hope to see again at some point. 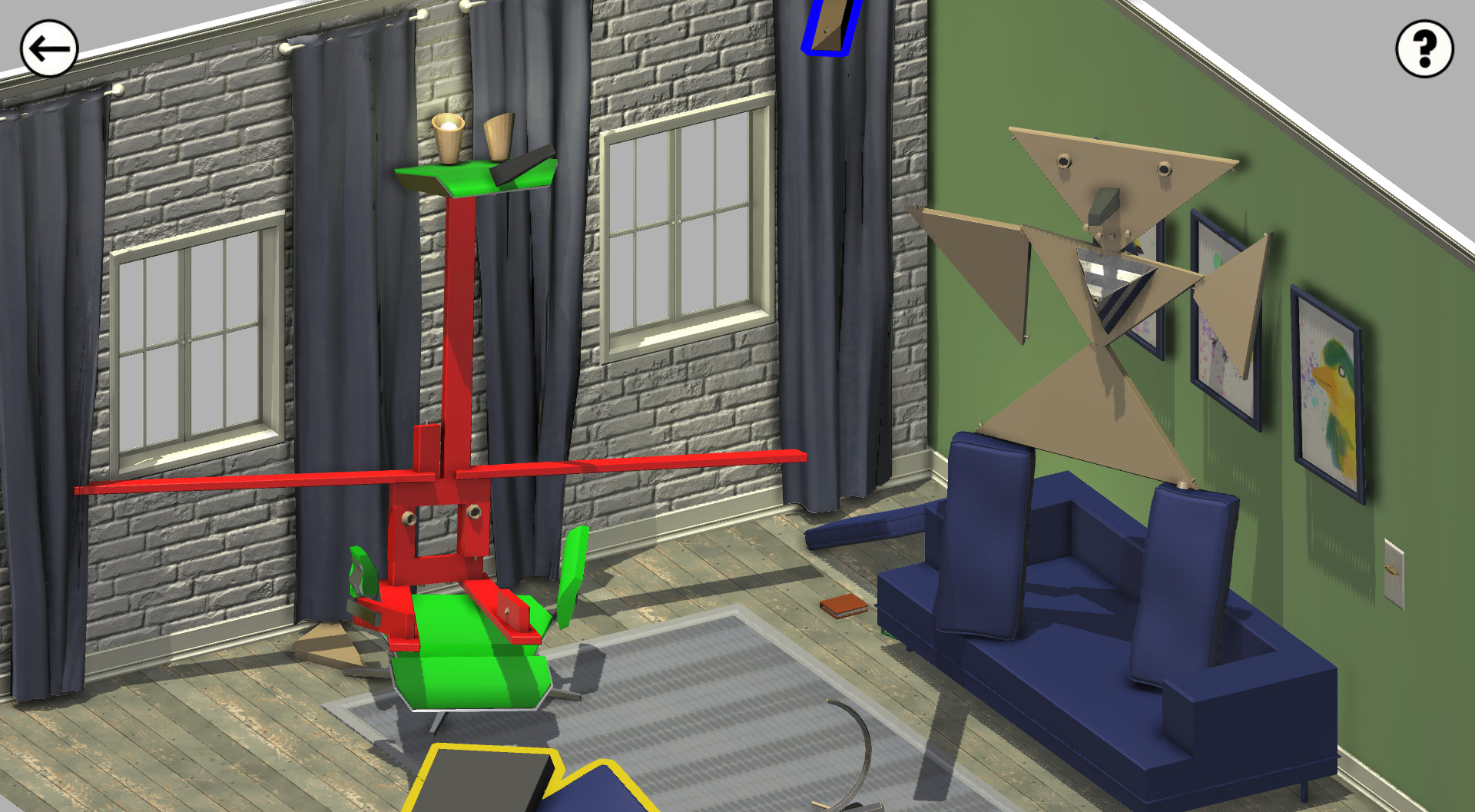 Alright, almost everyone's experienced the joy of assembling crappy furniture in the past, especially if there's a certain Swedish furniture store involved. The Stork Burnt Down is a development team comprised mainly of Georgia Tech grads and their game, Home Improvisation, started out as a game jam effort that has grown beyond its original concept. As one might gather, the idea is to assemble pieces of furniture.

The trick is that this is a multiplayer effort, so it quickly becomes a case of too many cooks in the kitchen. (Sometimes, literally.) The idea is to rotate parts and make sure the right pieces connect by dragging them around with the analog stick. However, there are no instructions, so players will have to put their heads together. Worse yet, this isn't the case where only the right pieces can be connected. Wrong pieces can be put together quite often, leading to furnishing monstrosities. Complications can even arise further as random household junk can get in the way. At one point, my team was attempting to assemble a fan, but wound up sticking the base on top of a pumpkin, for some reason.

Home Improvisation is best described as a comedy of errors and one that should bring friends together over the simple joy of trying to put a lousy chair together. Those looking to see what this madness looks like can actually try out Home Improvisation right now on Steam Early Access. 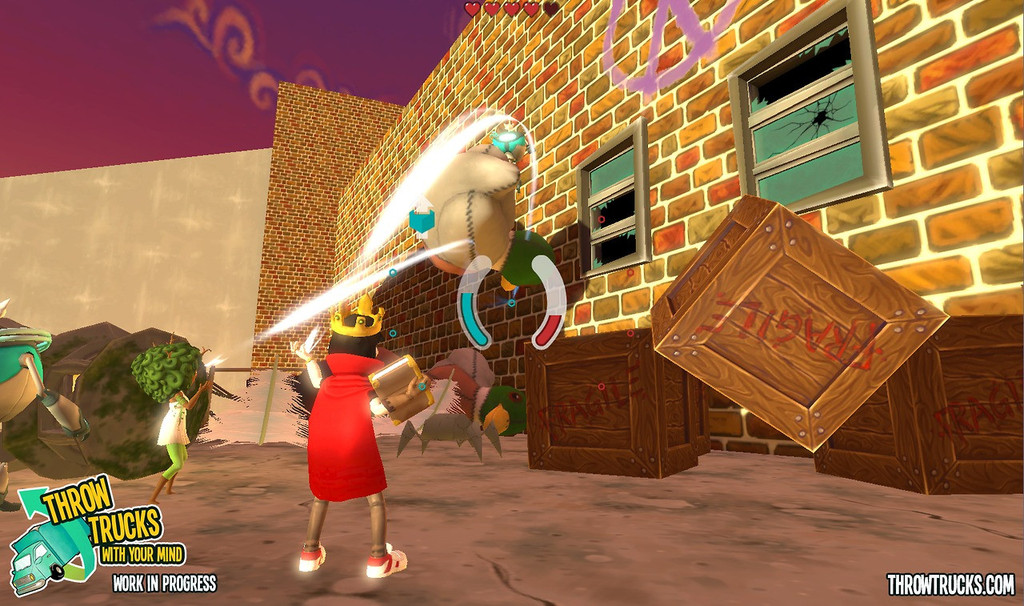 Throw Trucks With Your Mind

Throw Trucks With Your Mind was, by far, my most memorable experience from the IndieCade fire station. It wasn't just the wild premise, which should be indicated by the game's very title. It was the contraption that was strapped to my own noggin. 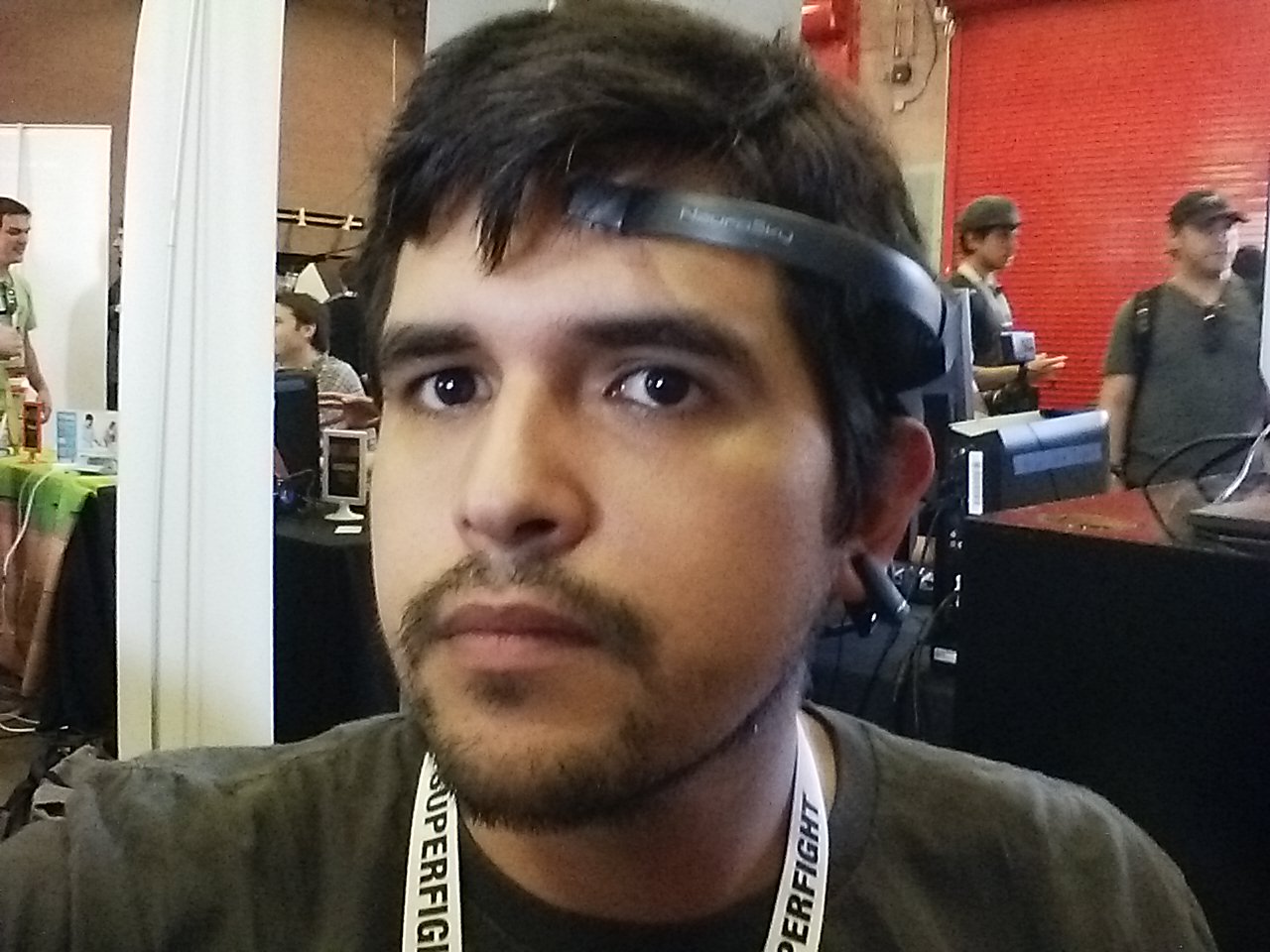 The actual game is centered around taking objects and trying to telekinetically (and literally) crush your opponents. While my time with the game's deathmatch didn't feel particularly special, the game will also feature other game modes, like King of the Hill and Capture the Fridge. While the visuals weren't the best, the concept was so unique that I was able to look past them and focus more on lifting up boxes and other objects and simply dropping them on passing opponents. While Throw Trucks With Your Mind may not be for everyone, its integration of the NeuroSky MindWave paints a picture of an interesting future for gaming.