Heroes of the Storm: Tomb of the Spider Queen Tips and Strategies

The Tomb of the Spider Queen map in Heroes of the Storm is perhaps one of the most straightforward of the game. It's a small, three lane, map with one objective that may turn the tide of victory. However, pleasing the Spider Queen is no simple task, since Heroes are pretty much on top of each other the whole time. That means a lot of skirmishes, and relatively fast leveling.

Offerings to the Queen

You'll need to pick up gems and deposit them in one of two receptacles in order to win the Spider Queen's favor. Gems are acquired two ways: By killing the spider that accompany minions down a lane, or by defeating opposing Heroes. But be quick, because gems won't stay on the map for very long.

Further complicating matters is how a defeated Hero will drop all the gems they were carrying, but those gems can only be picked up by its teammates. That means, you'll need to stick around for a few seconds after defeating a hero to make sure those gems disappear, and don't end up back in the hands of your enemy.

Once your team has deposited enough gems, the Spider Queen will summon Webweavers down all three lanes. These Webweavers in turn, will periodically summon a pair of melee warriors of their own to attack structures. If left unchecked, a Webweaver may end up with six of these warriors at their side. That's in addition to the Webweaver's own area blast power. The Spider Queen will require five more gems than the last tribute before she will summon the Webweavers again.

Strategies for this map are relatively straightforward. Your team needs to control the lanes, deny your opponents from depositing gems, and quickly slay the Webweavers if you get thrown into the defensive posture.

Easter Egg: There are structures on the northern part of the map that hold yellow spider artifacts. Repeatedly click on one of the artifacts before the match starts and Harrison Jones from World of Warcraft will make a cameo appearance. He'll climb down the rope to steal the Spider Gem, then he'll briefly appear by the enemy's crumbling core to give you the thumbs up when you win the match. 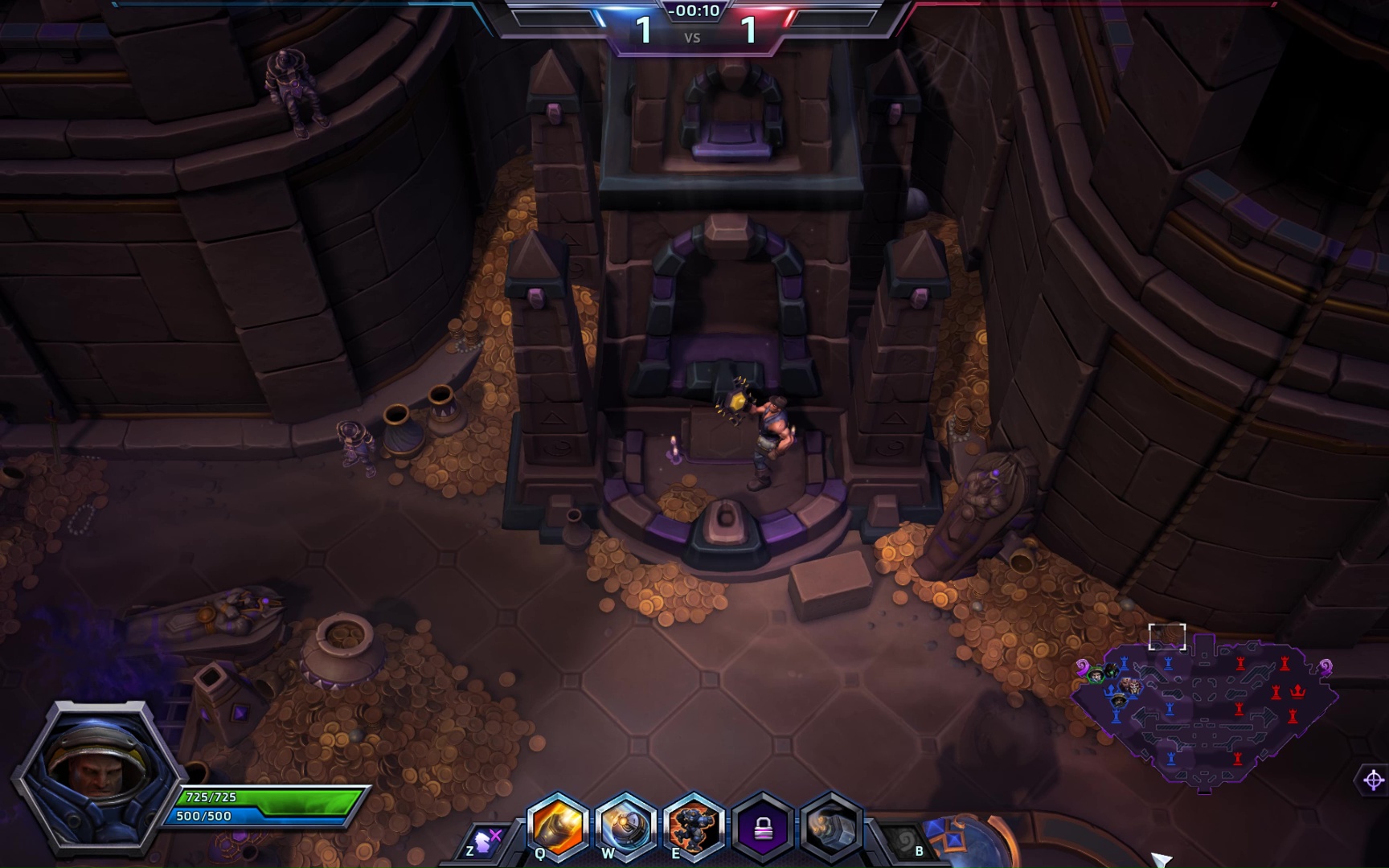 Fast Deposits: Deposit your collected gems as often as possible. The down time, when you're waiting for a new wave of minions to come down a lane, is usually ideal. But almost everyone will have the same idea, which can often lead to skirmishes. A better idea is to check the mini map often, and look out for opportunities to run up to a receptacle when it's clear of opposition.

Control the Middle Lane: Of the three lanes, the middle one is the most important. The team that controls it has fast access to both gem repositories, giving it the advantage of quickly depositing gems or responding to enemies trying to get to them. You might want to have one or two players dedicated to the task of denying enemies access to the repositories.

Area Damage: Webweavers don't stand up well against Hero attacks, and they tend to go down quickly. Also, while they can summon a lot of spider creatures, but they all tend to bunch up and attack single targets. It's up to allied Heroes to make sure they get the most out of their investment by eliminating opposing minions and taking out enemy Heroes before they do too much damage against your Weaver.

Characters that do great area damage are also extremely useful defensively for the same reasons. They can destroy the bunched up spider soldiers before they do too much damage.

Mercenaries: There are four camps spread across the map, ready to be exploited. Whether they're worth the effort is up to you. The two middle camps have a groups of mummies, while the southern camp has boulder slinging siege golems, and the northern camp has an Anubis-like boss creature.

The mummies can take a bit of a beating, but they're ultimately not worth much in a fight. Siege Mercenaries do a lot of damage against structures, and might let you breach defenses faster than summoning Webweavers. The powerful Anubis boss is great to have, especially if you can get them to support a Webweaver, but hard to get. You'll need to work out the timing with your team so that they wait until the boss is defeated before deposting the final gems needed to get the Webweavers.

It's usually more worthwhile to focus on getting the Webweavers before your opponents do, because even though they can't take a lot of damage, they can quickly overwhelm defenses. Leave mercenaries as a secondary objective, and pursue them only when you have time to spare.