Microsoft has released Windows 10 today, and with its release, we’re slowly learning about everything the new OS has to offer. While there are a number of great features included, we’re surprised to see a new version of Windows’ iconic Solitaire made its way to Windows 10. What’s more surprising is it appears Solitaire has been turned into a freemium game. 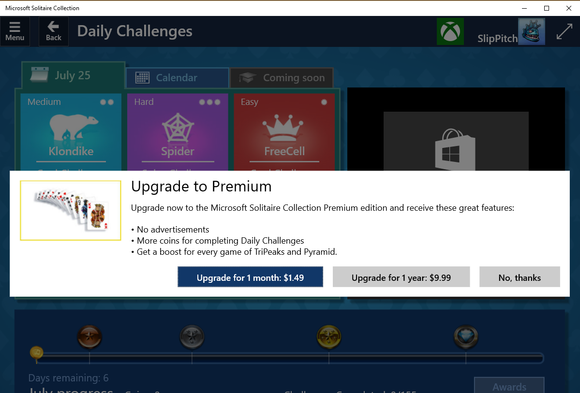 As you can see from the image above, Microsoft offers a premium for its Solitaire game. The premium, which can be purchased in 1-month and 1-year bundles, allows players to play Solitaire with no advertisements, gain more coins when completing Daily Challenges, and get a boost for each game of TriPeaks and Pyramid played.

Solitaire has been a staple of the Windows experience for as long as we can remember. Turning it into a freemium game seems like an underhanded way for Microsoft to make a quick buck on such a simple game. If you’re a fan of Solitaire, you might want to consider purchasing a pack of physical cards and play the game offline. At least you can do something else besides play Solitaire with your deck of cards, like perform magic tricks, build a house of cards, or play 52 card pickup.