With the upcoming release of Furious 7, Microsoft has teamed up with Universal Pictures to offer a special version of Forza Horizon 2 that serves as a prequel to the upcoming film. In the long-winded Forza Horizon 2 Presents Fast & Furious, you play as your character from Forza Horizon 2 directly after dominating the Horizon Festival in Southern Europe. Your next task is to assist Tej, who is voiced by Chris “Ludacris” Bridges, as he needs you to legally earn ten cars for his crew.

While the premise of the Fast & Furious expansion may not win any awards for originality, what you get is a piece of downloadable content that feels more like a re-introduction to Forza Horizon 2 rather than an extension of it.

Instead of having the player boost cars like the Fast & Furious crew would do in their films, Tej requires you to acquire ten cars he’s been keeping his eye on for his crew by racing for them. There are a total of ten vehicles you'll need to earn, some of which will be featured in Furious 7, which is a neat idea as I now feel like I had some direct influence over the film after I completed the collection Tej requested.

The objectives I was tasked with completing in order to earn the vehicles offered a nice sampling of content that’s available in the full version of Forza Horizon 2. Some races required me to keep a top speed of over over 130 mph by the end of the race, come in the top 3 upon completion of a race, or beat a military helicopter to a finish line. In order to acquire a vehicle, I needed to complete a two-step process of races, and then I was on to the next set of races. Once I collected all of the required vehicles, I was presented with a menu to buy one of three digital versions of Forza Horizon 2, which I was able to close to replay any of the races I had already completed as well as complete a number of side objectives, such as crashing into billboards and clocking in a high speed through one of several speed cameras. I was also able to drive any of the vehicles I acquired in Free Ride, although I was limited to driving around southern France.

The variety in vehicles also felt like a nice sampling of the main vehicle categories players can experience in Forza Horizon 2. I started off with the Dodge Charger R/T, but soon I found myself able to drive a Toyota Supra, a Jeep Wrangler Unlimited, and a Bugatti Veyron, among others. There were rear-wheel drive, front-wheel drive, and all-wheel drive vehicles I could check out, allowing me to once again sample how each one performs on the roadways of southern France. Some races I came across allowed me to race with whatever vehicle I was currently driving, while others either automatically had me driving one I had already unlocked or gave me a choice between a number of suitable rides.

Even though there’s quite a bit of variety in the Fast & Furious pack for Forza Horizon 2, owners of the standalone game should reconsider picking it up as it doesn’t take into account whether or not you have already played Forza Horizon 2. That means you’ll be reintroduced to a number of tutorials for game features you are probably very well acquainted with, such as how to toggle through the radio stations or tips on earning high style points. In fact, if there wasn’t a demo for Forza Horizon 2 already, I could easily consider the Fast & Furious DLC to be a demo rather than an extension of the main game. 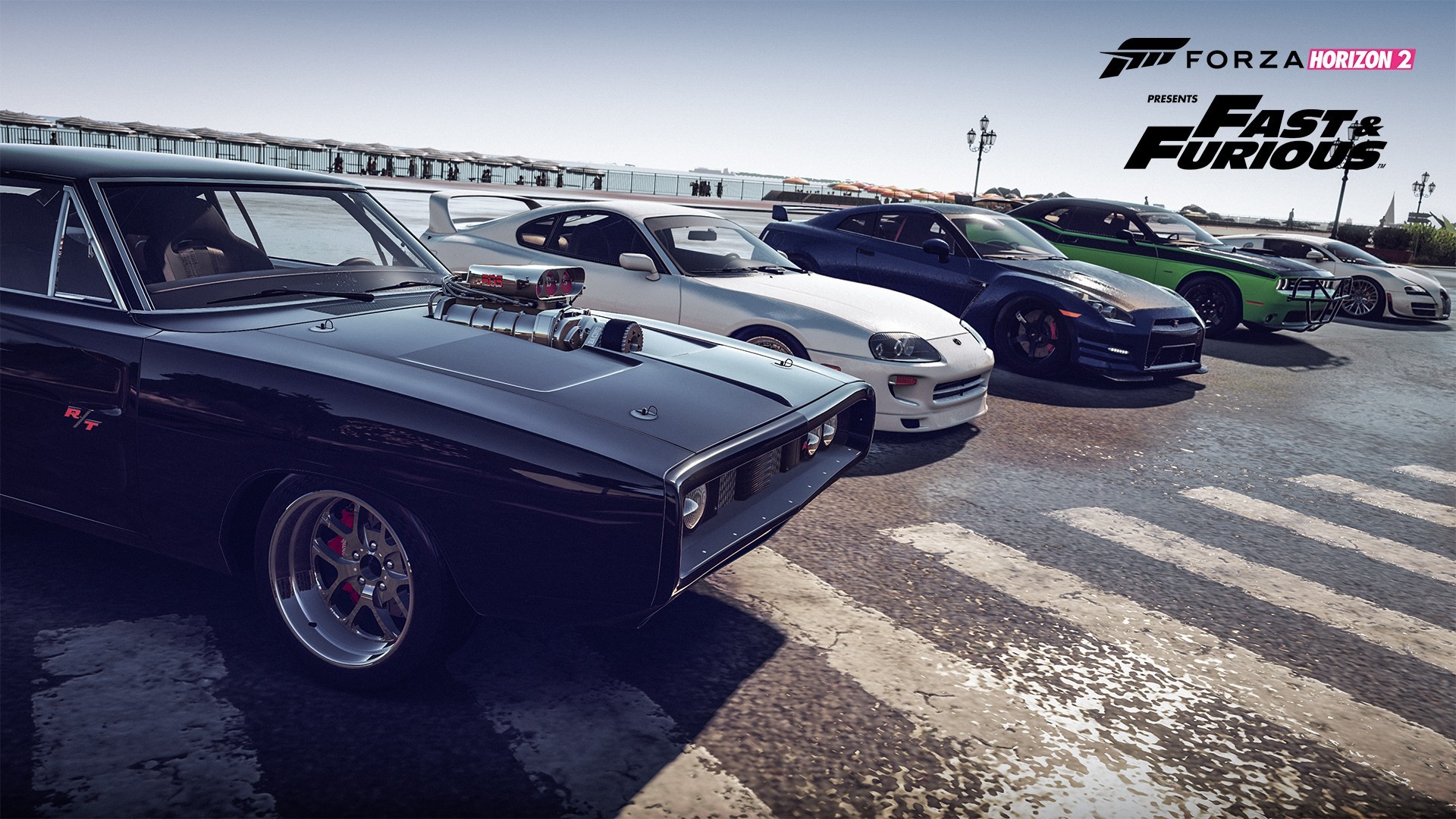 The Fast & Furious expansion doesn’t expand on the original Forza Horizon 2 experience either as the standalone game has its own set of races, side objectives, and other things you can do that are only made available within the game. That means the vehicles that you unlock in the Fast & Furious expansion won’t transfer over to Forza Horizon 2, although many of the vehicles included are available to unlock on their own in the main game.

The cross-promotion between the Fast & Furious franchise and Forza Horizon 2 is also done poorly as the game starts with a number of high-octane clips from Furious 7, but the only real connection I had with the films during play was the fact Ludacris was chatting with me about upcoming races, as well as praising or berating me depending on the outcome of a race. If I was able to race against or with some of the other characters from the film franchise, or maybe even attempt to boost a vehicle, that would have made me feel like I was really taking a part in its world, but ultimately this just feels like Forza Horizon 2 with a light coating of Fast & Furious.

Forza Horizon 2 Presents Fast & Furious is a great “demo” for fans of the film series who want to check out Forza Horizon 2 while also getting a dose of the film franchise they love so much. The game does a great job of giving players a taste of the Horizon 2 experience as I was able to complete the main story in approximately 3 hours. That's definitely enough time to get those who were previously on the fence about buying Forza Horizon 2 to pony up their cash for the full experience.

As for those who already put in countless hours into Forza Horizon 2, you won’t be missing much if you consider skipping the Fast & Furious expansion altogether as there's nothing here that you already haven't experienced for yourself. That is, unless you're a really big Ludacris fan.