Game of Thrones The Sword in the Darkness Impressions: Four Sides to Every Story

Warning: Article may contain some spoilers from previous episodes.

The Sword in the Darkness is the third chapter in the Game of Thrones episodic game series based on the hit HBO show. Although House Forrester still stands on the precipice of ruin, it feels like the characters are making bigger steps toward pulling themselves up and getting back at those that wronged them. Or perhaps it's a false sense, and everyone will die soon. Either way, we're halfway through the season, and I'm starting to see the limits of episodic storytelling.

With four distinct characters, stories, and locations, keeping up with what's going on is starting to become very difficult. Not even the opening recap and the "My Decisions" screen provide enough of a reminder. For instance, my decision not to help fellow handmaiden Sera with her love life comes back to haunt me because I am suddenly in need of her help. We're only on the third episode, but it's getting harder to remember all the little decisions I've made. What's it going to be like when we reach episodes 5 and 6?

The difference fundamental difference between watching the show and playing the game is that nothing on the show is contingent on the decisions you've made. If a character or subplot seems unfamiliar, it's easy to skip over it until your brain plays catch-up or declares it too insignificant to recall. That's not as easy to do with the game. It would be different if the game released weekly episodes like the show does, but with a 1-2 month gap between games, it's tough to keep track of it all. The game's timeline takes place during past episodes of the show, so there's not a lot to spoil, making the piecemeal release hard to justify.

In any case, the fate of House Forrester rests in the hands of four family members, spread out across the four corners of the world. Rodrik, still recovering from severe injuries, is tasked with keeping order on the home front while his family's rivals (the Whitehills) occupy and despoil their lands. Halfway across the world is Asher, the exiled son turned mercenary, getting by at Slaver's Bay. He's being called back, and will hopefully return with army of sellswords to help liberate his home. Meanwhile, Mira is playing a dangerous game of intrigue at King's Landing. She has to find a way to secure revenue for her house so that they can pay for said sellswords; all while trying to maintain the approval of her boss, Margaery Tyrell, and the tepid not-quite acceptance of Queen Cersei. Lastly, there's Gared, who was sent to the Wall in the first episode, and takes his vows as a member of the Night's Watch in this one. He has to struggle between the promise he made to his family and House Forrester to find a mythical place called The North Grove, and his new duties as a Night's Watch brother.

If that seems like a lot, playing it just as bad, if not a little worse. But once you manage to get past whole "what's going on?" phase, then you can get back into the compelling and complicated story. Episode 3 takes place around the time of the Royal Wedding, and a lot happens, including an up-close and personal run-in with a dragon and a fantastic ending. However, my big gripe is a scene where armed soldiers try to squeeze through a narrow cave opening to capture Asher. Why not kill a few of them and leave them wedged in between the rocks, where they'll block the opening? I guess they needed something to distract the dragon with. 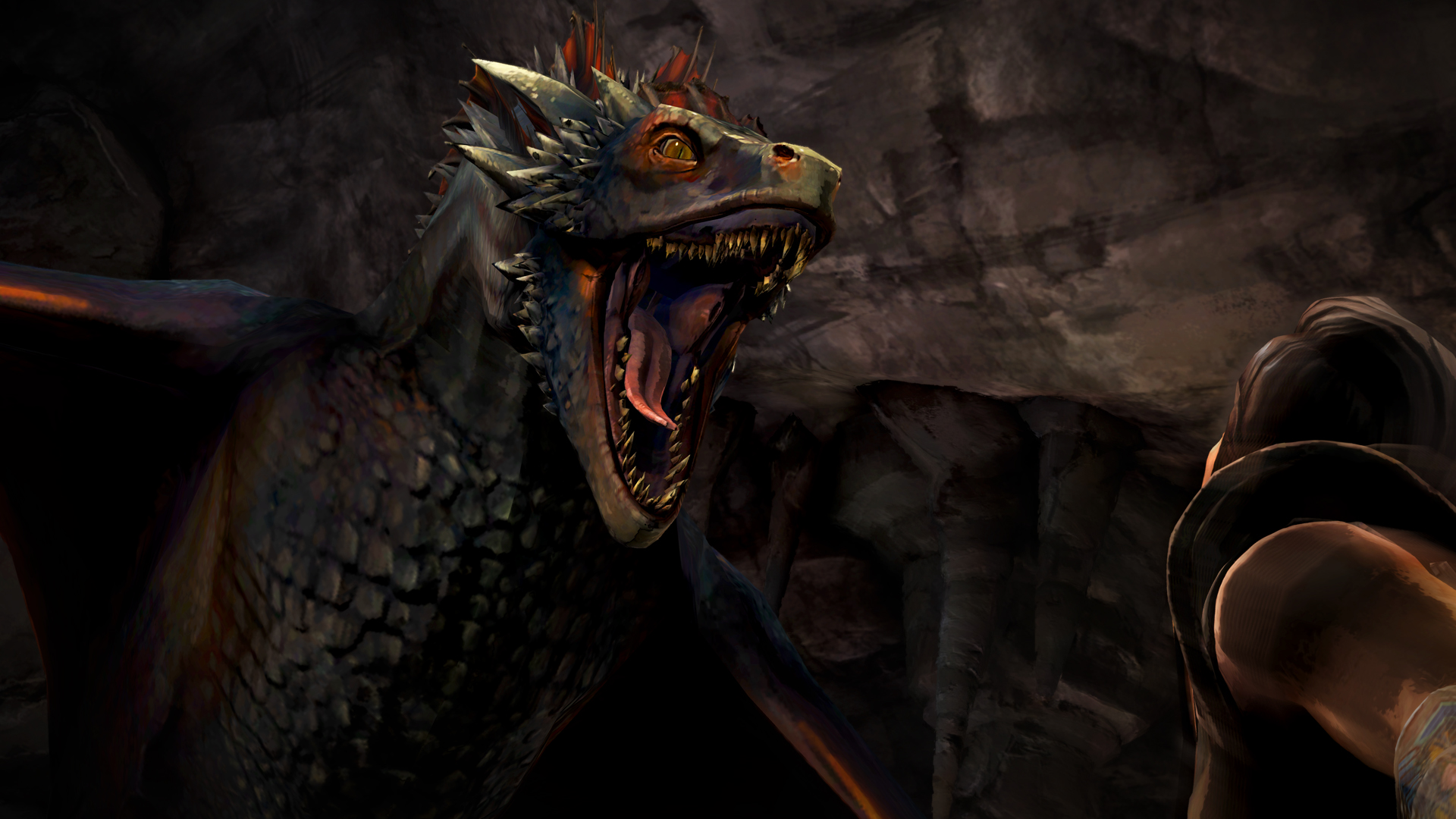 I get the distinct feeling that once the season is over, I'll have to replay all the episodes consecutively from start to finish just to remind myself of everything that happens. Things certainly seem to be coming together right now, or falling apart, depending on your point of view. And there are so many.

Impressions are based on a PC code provided by the publisher. Game of Thrones: The Sword in the Darkness is available digitally for $29.99 or $4.99 per episode. The game is rated M.