12 Adventure Games Worth Points and Clicks

There was a time, not long ago, when people thought adventure games were dead. As it turns out, the multitude of offerings from Telltale Games, the return of Grim Fandango, and the unexpected release of Fahrenheit: The Indigo Prophecy Remastered, proves that the age of character and story driven adventure games was far from over. In fact, it's clear that the genre is primed for a big comeback. There are a ton of great adventure games available now, and we sort through some of the best ones.

Originally formed by a group of former LucasArts employees, dedicated to bringing back adventure games, Telltale Games is one of the most prominent developers around right now. Although Telltale already released a number of different episodic adventure games like the Sam & Max series, Tales from Monkey Island, and the Back to the Future , the development studio didn't make a big name for itself until it started telling a story based on the award-winning Walking Dead comic book and television series. It turns out a mature story set in the zombie apocalypse is just what audiences had been clamoring for.

The Walking Dead, a story about making hard choices that balance between survival and morality, has had two very compelling seasons and a one-off episode (400 Days) that are tied together by the player's choices. Making critical decisions that impact how both future episodes and seasons play out is one of the foundations of the series' success, and the model has gone on to inspire other episodic adventure games. Every decision has its consequences, and in a world where you're constantly surrounded by death and danger, the only question is who will live the longest?

Probably best known as the adventure game that launched a thousand Kickstarter campaigns, Broken Age began its development by breaking records and rules. It was the first time a well-known development studio like Double Fine Productions decided to create a game based on crowdfunding revenues. Fans were more than eager for a new adventure game created by legendary designer Tim Schaffer, and the project far surpassed its initial goal in short time. The rest is history, right?

Not quite. The overfunding inspired Schaffer to expand the project and the story got split into two parts. Act 1 released on January 28, 2014. Fans are still waiting for the second part to release more than a year later. Fortunately, Broken Age, which tells a story from two radically different points of view, but strangely similar situations, is still a pretty good experience. Despite its wonderful hand-drawn visuals and orchestral soundtrack, along with its character and puzzle driven narrative, no one will blame you for holding out until Act 2 arrives. However, those looking to evidence that adventure games are a long way off from dying should give the game a try.

The Wolf Among Us

The Wolf Among Us, another Telltale adventure, takes players to a world inspired by the Fables comic book series, where magical characters from fairy tales and lore are real and are secretly living in New York City. Bigby, formerly known as the Big Bad Wolf, is the sheriff of Fabletown, and he is pulled into a murder investigation that takes him to the town's underbelly. Bigby faces a number of different decisions, mostly between balancing between the needs of the disenfranchised with the laws of the land. In the meantime, he uncovers a web of corruption, and has to decide how far he's willing to go to satisfy his animalistic side.

The five-part episodic series, Life is Strange, practically comes out of nowhere. Developed by Dontnod Entertainment, whose only previous game is the memory warping action game Remember Me. The story takes place at a private academy high-school, where an aspiring photographer named Max discovers she has the power to rewind time. This ability turns the idea of choice on its head, since players can see the short term outcome of their decisions and stick with the one they like best. In addition to dealing with everyday problems like bullies, Max reconnects with an old friend named Chloe, and together they try to figure why she has these powers and how they relate a missing student named Rachel Amber. Also, a massive tornado threatens to flatten the town in a week, and Max has to find a way to... stop it? Yes, life really is strange.

Dreamfall Chapters finally became a reality after a successful crowdfunding campaign, driven by a huge group of dedicated fans. The episodic series follows-up after the point-and-click adventure game Dreamfall: The Longest Journey, which in turn is a sequel to 2000's The Longest Journey. The five-part series picks up shortly after Dreamfall's cliff hanger ending, and features two characters in two parallel worlds - one of science, and the other of magic. Players spend most of the first episode exploring a cyberpunk world through the eyes of Zoe Castillo, a woman with the ability to travel across dreams. Although she doesn't realize it yet, she must use her abilities to balance out the two worlds before they threaten to destroy each other. Marked by stunning visuals and an emotional story, Dreamfall Chapters promises to conclude the Dreamer Cycle storyline, pleasing fans while introducing new players to the fantastical world of Dreamfall.

You'll have to look pretty far back in gaming history to remember the Tex Murphy point-and-click adventure games from the 1990s. The series, which featured an sarcastic old-school private detective working out of a beat up post World War III office in 2050 San Francisco, included a mix of dark humor, puzzle solving, and sci-fi mystery. Not to mention all the full motion video that gave the games much of their character and charm. Its last game, Overseer, released in 1998 and ended with a huge cliffhanger.

Thanks to a successful Kickstarter campaign, Tex Murphy fans could finally get closure on that sixteen year old mystery. The Tesla Effect brings back all the classic adventure game mechanics, including puzzles, an open world to explore, and plenty of full motion video for both old and new fans to enjoy. Tex, having lost his memory of the last several years. In trying to regain his memory, and in turn figure out what happened to his love interest Chelsee, Tex delves into a series of unsolved murders that are somehow tied to the lost technologies of Nikola Tesla. If you've ever wanted a window back in time, when adventure games and full-motion video were the biggest games in town, then The Tesla Effect certainly fills that role.

Regarded by many as one of the best point-and-click adventure games of all time, Gabriel Knight: Sins of the Fathers 20th Anniversary Edition completely remasters the 1993 classic with all-new graphics, voices, and sound. It even streamlines controls and rearranges areas for a smoother gameplay experience, making it easier for new players to enjoy the game. The story, which features a down-and-out New Orleans novelist and book store owner (and womanizer) named Gabriel Knight, involves a series of ritual killings dubbed "The Voodoo Murders." It is in researching the Voodoo murders that Gabriel discovers that he his family is part of a line of Schattenjägers (shadow hunters), who are charged with combating evil supernatural forces.

Sins of the Fathers stands out as the premiere adventure game that made Jane Jensen's reputation as a game designer. Using a new design, but keeping the classic story, along with using New Orleans as a backdrop, this is one point-and-click adventure that's worth checking out.

Tales from the Borderlands

Tales from the Borderlands is the adventure game that nobody asked for, and probably nobody was expecting, but one that every Borderlands fan should treat themselves to. Set on Pandora right after the events of Borderlands 2, Tales from the Borderlands tells a story that isn't about fearless vault hunters. Instead, it focuses on two people trying to get by in a world filled with insanity, chaos and violence. First, there's Rhyse, a member of Hyperion looking to become the next Handsome Jack. Then there's Fiona, a con artist looking for the big score. Both are after a briefcase full of cash that they each believe rightfully belongs to them, and they get caught up in a crazy adventure.

The adventure game fully captures the signature humor of Borderlands while telling a character driven story. Decisions in the game aren't always morally driven, but more of reactions that gets you from one crazy situation to the next. Only one episode has been released so far, which means there's plenty to look forward to on Pandora.

If there were ever a classic game that deserved a second chance, it's Grim Fandango. Set in Mexican mythology and featuring plenty of humor and an excellent cast of characters, Grim Fandango recently made a fully remastered comeback. With its updated graphics and controls, a whole new generation of fans can meet Manny Calavera - travel agent to the deceased - as he stumbles into a huge afterlife conspiracy.

At a time when point-and-click adventure games were becoming increasingly rare, 2011's Gemini Rue stands out as among the best modern adventure games around. The tough and gritty cyberpunk story takes place in the 23rd Century, in the Gemini System. It involves an ex-assassin named Azriel Odin, who must seek help from his former employers. On the other side of the galaxy, Delta-Six awakens in a hospital with no memory, and vows to escape before completely losing his identity. Fate brings these two together, and their stories could change the whole galaxy, while bringing into question the nature of free will. 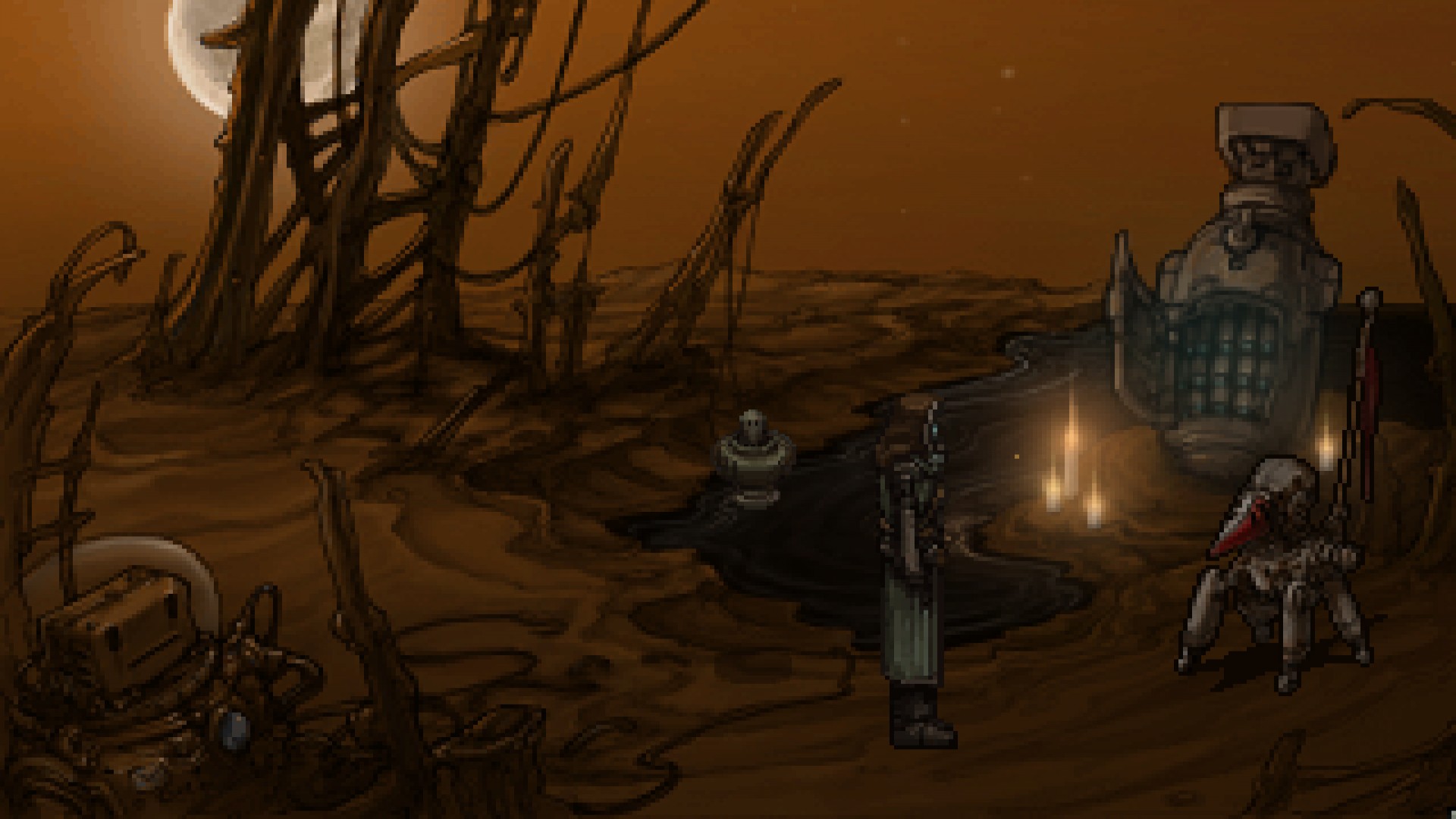 In Primordia, the age of mankind is long over. What remain are cast-off machines, left behind after a catastrophic war, and a mystery behind humanity's disappearance. The main character is Horatio Nullbuilt, a robot that values solitude and independence. His world is disrupted when someone steals his power core, the only thing that keeps both him and his ship going. Horatio must travel to new parts of the world to recover what has been lost, and in doing so, discovers information about his origins and the humans that once walked the world.

Another production from the very prolific Telltale Games, Game of Thrones is based on the hit HBO television series. It uses the same setting and events, and its overlapping characters use both the likeness and voices of the original actors. This story involves House Forrester, a small but powerful noble house that were once loyal bannermen to the Starks of Winterfell until the events of the Red Wedding. Now House Forrester stands on the brink of ruin. Caught up in the War of the Five Kings, it struggles to survive in a world of horror, intrigue, and revenge. Told from multiple points of view, spanning the far corners of Westeros and beyond, and featuring decisions that could be a matter of life or death, The Game of Thrones adventure game is an excellent companion to the television series.

These are some recent adventure games, but there are still plenty that didn't make the list. However, curious adventurers looking for a good start should check out these games. With Day of the Tentacle Special Edition and a Minecraft adventure game coming over the horizon, there adventure game fans have a lot more to look forward to.