Horror game fans got a treat this week, as Resident Evil HD Remaster made its way onto the Xbox 360, Xbox One, PS3, PS4, and PC. The original game didn't catch my interest when it released on PlayStation in 1996, and I let its remake pass me by both when it hit the GameCube in 2002 and ported to the Wii in 2008. But now, having played so many survival horror games, I gained a curiosity for the one that began the genre. So, I was genuinely looking forward to Resident Evil releasing on the PC. I expected that playing it would be much like seeing Star Wars: A New Hope for the first time, except with the remastered experience, so dated special effects wouldn't interfere with the enjoyment of the film. However, after I started playing, I couldn't help asking, "What's the big deal?"

Yes, it looks great, which should be the minimum standard of any remastered game. I also realize that it's been over a decade since both the original and its remake were first released, and this is simply a remastered port of the GameCube version. Add on top of that the fact that, after years of desensitization, I don't scare easily. I kept all that in mind as I watched the intro sequence cinematic, featuring what I thought was supposed to be an elite SWAT team sent in to investigate an area. Instead, I was treated to a squad that panics at the drop of a hat, and scream like little school children when they discover a dead body. The chopper pilot abandons his team, and Jill freezes with a doe-eyed stare when confronted with what initially looks like a pack of mangy dogs.

STARS isn't exactly the elite strike force I was expecting. Then I realize as soon as I see "sunglasses at night" wearing Albert Wesker (who has become a Rosebud equivalent after multiple games and movies) that there will be a sudden yet inevitable betrayal coming my way. Soon after entering the mansion, we make the terrible B-movie decision to split up. Next, we enter a dining room, where my teammate wants to be divine clues from a pool of blood by staring at it, and tells me to go exploring on my own. With decisions like these, our odds of survival were dropping fast, but I guess that's why it's called a survival horror game. 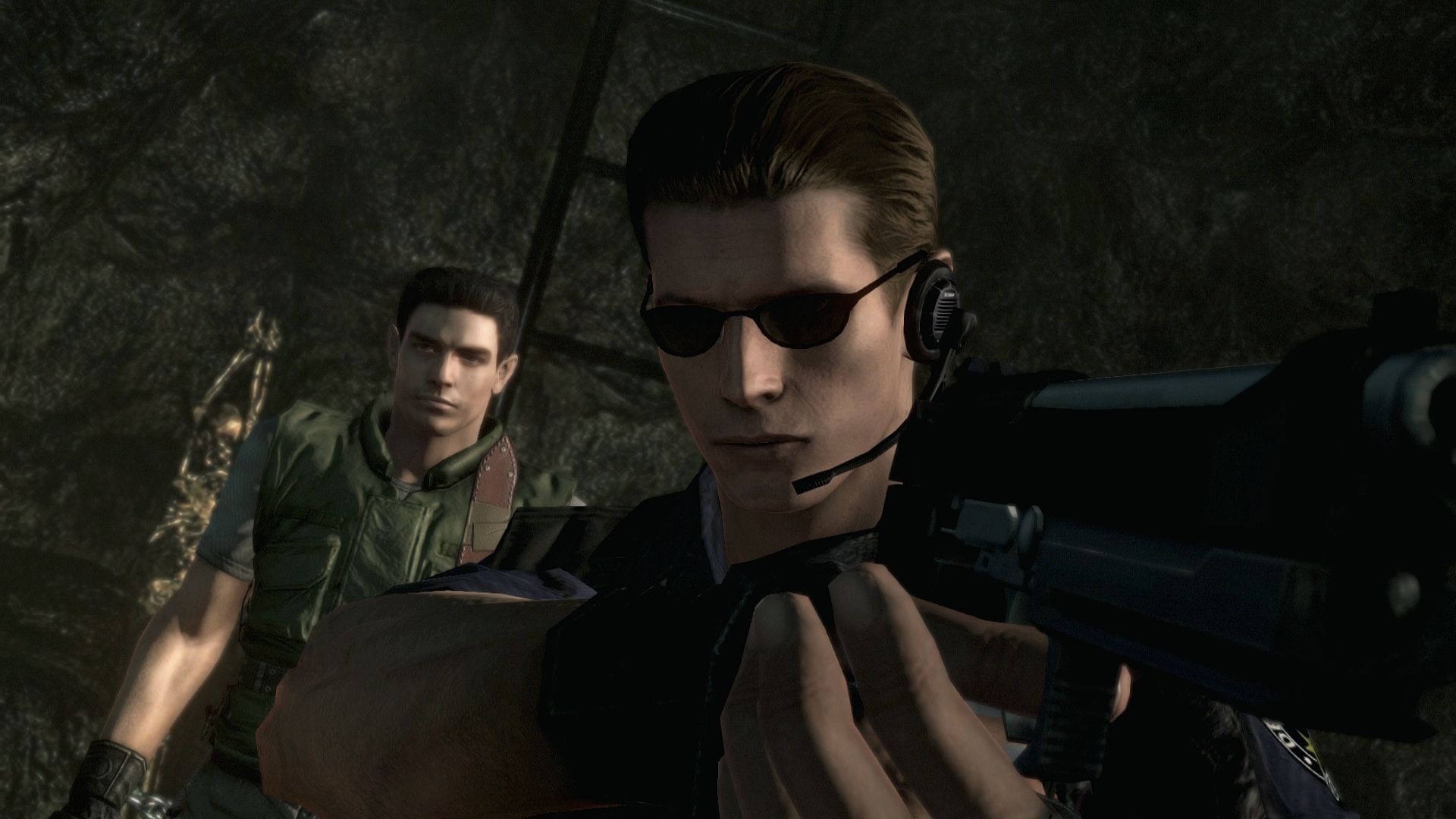 The story isn't impressing me so far, but surely the fully remastered gameplay and controls will win me over! They don't. I had no idea what was going on with the aiming system. Jill goes into shooting stance, and I use the mouse to aim, which causes her to point the weapon straight up at the ceiling. I compensate by moving downward, and suddenly she's aiming at the floor. It seems the only way to shoot a zombie is to aim at its chest, which defies the one rule that has been drilled into me by almost every zombie game I've ever played: aim for the head. It takes almost a whole magazine to drop it, and when I return to the dining room, I trigger a cinematic sequence where my teammate kills the zombie for me. He seems very calm for a guy who just discovered that monsters exist, and suggests that we split up again.

That's when I decided to stop and restart the game. I had just wasted a ton of bullets on a single zombie that a cinematic took care of for me. I gave Chris a try, and found out that he's armed with a perfectly useless knife, doesn't believe in aiming for the head, and doesn't have a handy teammate to shoot the first zombie for him. The remainder of the game, from what I could gather, involved solving classic Tomb Raider style puzzles and hoping that you never have to draw your weapon against anything.

Being that this is the remastered port of a remake based on a game from the 90s, I'm willing to give the game a lot of slack, but I don't understand why people would call it one of the best survival horror games of all time. Yes, it's the first of its kind, and when something is compared to itself, I suppose it can't help but be the best. Using that kind of reasoning means that the Ford Model T is one of the best consumer automobiles of all time. It does deserve credit for blazing a trail, but others have done it much better. Some will say I shouldn't judge a 13 year old game, despite the fact that liking it is a form of judgment. Plus, this is the remastered port, so it shouldn't be immune to criticism.

Many may argue that it's impossible for me to understand the game's charm because I never played the original version, when very reason I wanted to play it is because I missed out on it. I didn't realize that prior experience was a pre-requisite. If that's the case, there should be a disclaimer in the game's description to help save people time and money. I also point out that the original game had plenty of flaws, since the GameCube remake added improved gameplay. Furthermore, the super easy difficulty setting probably wasn't added to please longtime fans. 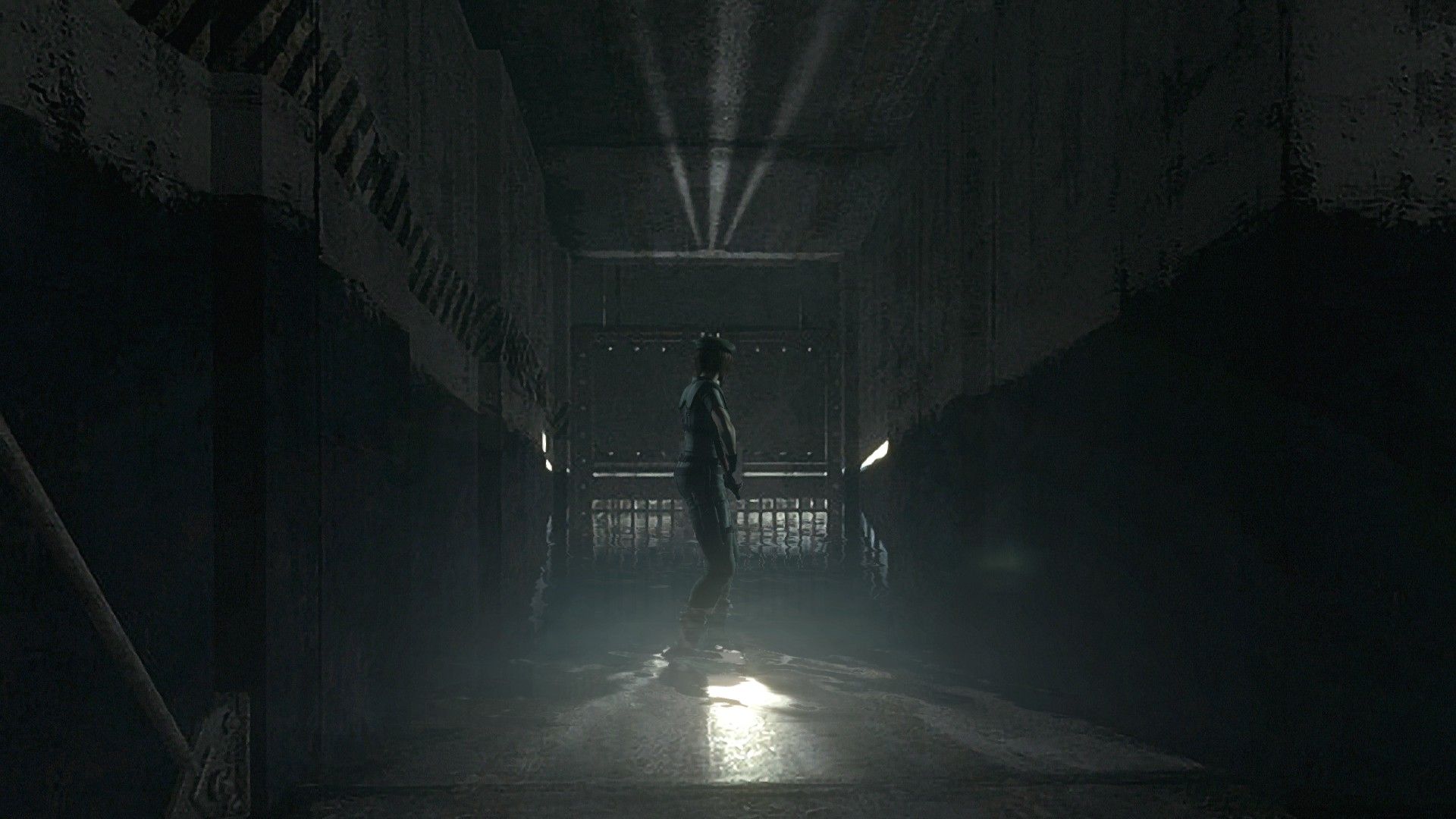 I'm generally a big supporter of remakes and remasters, because it gives fans to experience old games in a new way, and provides an opportunity to bring in new players that missed out on the original releases. 2014 and 2015 are prime years for remastered classics, which include The Master Chief Collection, Grim Fandango Remastered, and Day of the Tentacle Special Edition among many others. Some games just need a fresh coat of paint, and others require a little more attention. After spending some time with it, I think Resident Evil HD falls into the latter category.

One of the things that impressed me about Gabriel Knight: Sins of the Father 20th Anniversary Edition was that it didn't stop at remastering the graphics and sound. Areas are redesigned, the interface reworked, and extraneous scenes from the original game are removed--making it a different experience for fans, and a better experience for newcomers. Similarly, Metro 2033 Redux features scenes that play out a little differently than the original. This is the kind of standard that all remastered games should strive for. Things that are problematic should be fixed, to both be in line with more modern gameplay developments, and to bring in new fans.

There's probably not a lot that can be done with Resident Evil's plot while still preserving the feel of the original game. Truth be told, the campy quality should be part of the game's charm, but certainly something more could have been done with the controls. It might sound like I'm demanding a total remake of a remake, but in actuality, I just wish the developers took the control modifications a step further. You can switch between the original movement controls, or use the much smoother new ones. I actually don't mind the shifting camera angles, since I consider the game shown from the point of view of security cameras, and I really like not having the controls work against me. Why couldn't the shooting system be similarly revised, with the option to revert back to the extreme aiming controls?

Although there's little doubt that re-releases are primarily targeted toward longtime fans that want to relive a sense of nostalgia, there should be an equally strong effort to win over players like me, who don't have fond memories to look back on. If all we're supposed to expect from remakes is the same game, except with a nicer look, then there's no point in talking about them. Everything that's worth saying was probably already said with the original release. But I think we should sometimes raise the bar a little higher, and expect remastered games to improve the experience however possible. There should be an option to revert back to original controls so that both new and old players can appreciate those improvements. I want to like Resident Evil HD Remaster. I want to understand why so many fans look fondly upon the game. I also want to be able to shoot zombies in the head and not have my elite STARS character appear to be a total rookie who doesn't know how to point a gun.