Rollers of the Realm combines two desperate genres, role-playing and pinball, into one action game. Although it might be hard to imagine the two things working well together, they do... for the most part. However, the game comes to a frustrating halt once you reach the limit of your pinball prowess.

Party Up, Roll Out

The game puts players on the journey with a party of adventurers. They don't have names, but are instead referred to by their class: Rogue, Knight, Healer, etc. More can be recruited, and the party can grow to include up to 10 members, each one represented by a unique pinball. So, you can literally have a pinball wizard at your disposal. Each character has special abilities, for instance the Hunter intermittently fires arrows at enemies. Oh yes, there are enemies. Each area is rather complex pinball table, populated with breakable objects and foes that try to impede your progress. 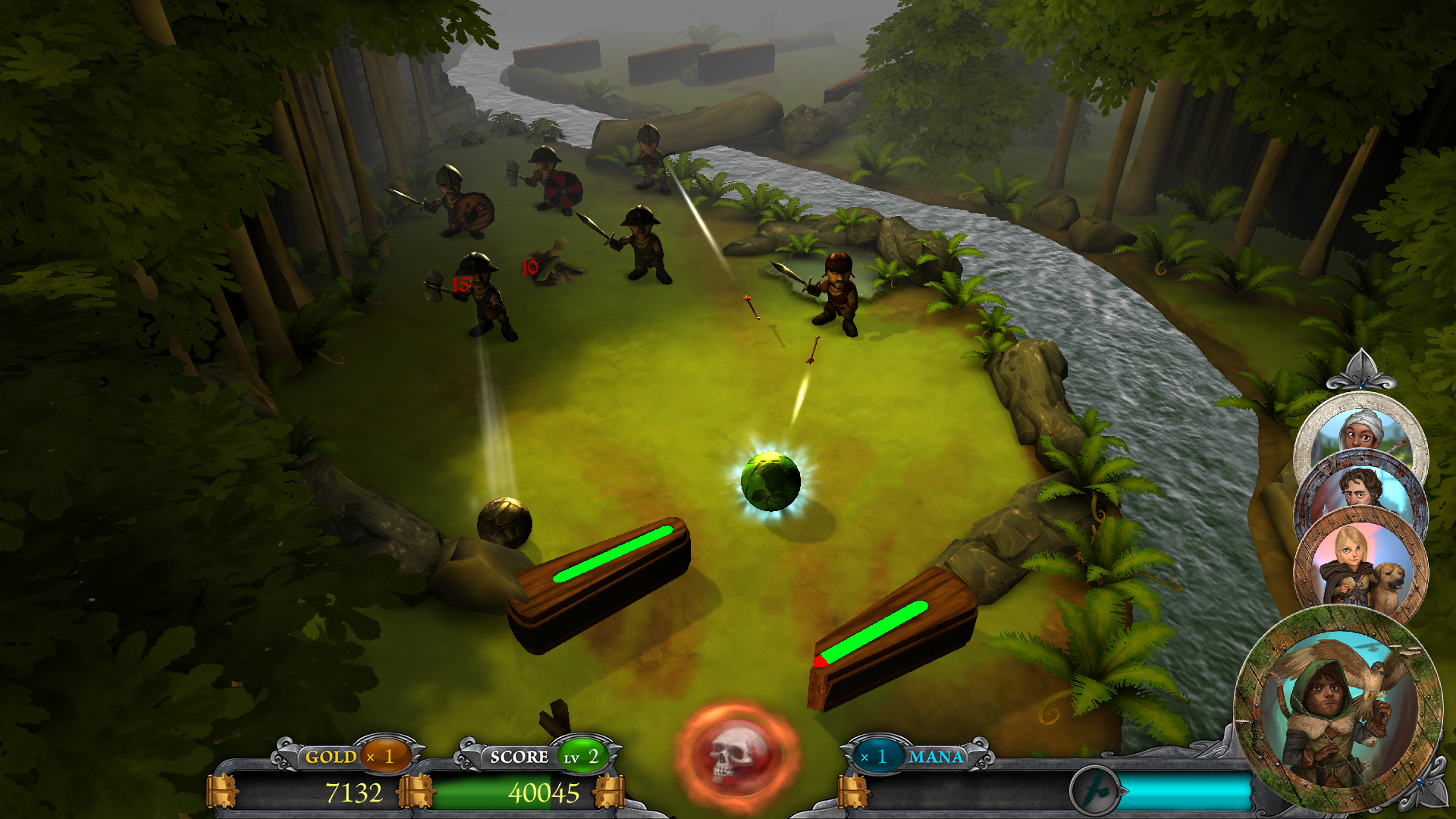 Most enemies stand in place while your pinball "attacks" by rolling into them. Others, like archers, will alter your trajectory and even damage your pinball paddles, which shortens them. Pinball characters come in different sizes and speeds. To do the most damage, you'll need to roll into them with a big and heavy Knight, then you'll need a Healer to recover, but she doesn't do much damage. The Rogue steals money from everyone she bumps into and does extra damage when hitting them from behind. Characters also have special abilities, such is calling in pets (multiball). Abilities and other attributes can be augmented by buying items for each character. Losing a ball counts translates into a party member being disabled until you can accumulate enough mana, by bouncing off objects, to revive them.

Despite its charming characters, dialogue, and RPG elements, enjoying Rollers of the Realm depends almost entirely on your pinball proficiency. Mine are about average at best. When the game works, it really works. Watching the ball roll around the board, bouncing off objects and people, and looping through secret passageways can be a blast. Then there are times when you have to hit specific targets, some of which are moving, and that's when the game can become a drag. For example, there's a mission where you have to stop torch bearers from reaching the gate, but the multi-tiered board only lets you see so much at a time. There's no warning when they start coming in from a different area, and you'll end up losing when you think you have everything handled. In a different map, your characters have to climb towers by hitting the ivy that grows on its sides, however the process isn't very obvious and the game doesn't offer much guidance on the matter. I discovered the ivy rope purely by accident after bouncing the ball around randomly.

From the pinball standpoint, Rollers of the Realm is very good. The characters, with their different weights, speeds, and abilities. offer excellent diversity and match the player's preference. Levels are nice and complex, with ramps to leap from, barriers to smash, and elements like ponds that will slow the ball down. Creatures may be added to the mix, which will steal away mana if hit.

However, Rollers of the Realm can be quite unforgiving. Losing (when all your characters are out and you don't have any mana to revive them) means that you don't get any of the experience or money from playing the level. Some boards have multiple phases, and you'll have to start the area from back from the very beginning. There's no "nice try" pat on the back with partial rewards. Few things are as frustrating as having to restart an area because of a split second event that causes your pinball to sail straight in between your paddles. Getting stuck in Rollers feels signifcantly worse than losing at a more straightforward game like PInball FX 2 mainly because of its RPG elements. A plain pinball game doesn't have a sense of grind, nor does it have objectives that I must achieve or else I'll lose the game. Objectives are purely optional in a regular pinball game, and not being able to achieve them is no big deal.

Hitting a wall with your pinball skills brings the entire game to a standstill. Earning extra money means replaying old areas until you can afford new items, and buying extra gear and weapons should theoretically help up your game. But apart from the mana reduction items, I didn't really notice much of a difference. It's hard to appreciate how your ball doing extra knockdown when you're concentrating on trying to aim a pinball at specific targets and locations.

Rollers of the Realm, by most respects, is an excellent pinball and RPG hybrid. However, it takes a great amount of skill and no small share of luck to get through it.

This review is based on a PC code provided by the publisher. Rollers of the Realm is available in digitally for $9.99. The game is rated T.