Lara Croft and the Temple of Osiris Hands-On: Guns, Gods, and Puzzle Solving

Tomb raiding is usually a solo career, but Lara Croft manages find allies in the strangest places in the cooperative puzzle action game Lara Croft and the Temple of Osiris. In her upcoming adventure, Lara teams up with a rival raider named Carter Bell and not one but two gods, Horus and Isis. Using their combined skills, the foursome battle their way through a tomb (of course) filled with undead minions commanded by the Egyptian god Set, who hacked his brother Osiris up into pieces. So, it's up to Lara and her crew to collect all the pieces and reassemble the deity and gain his powers back.

To be clear, this game features the classic Lara Croft, not the one seen in the recent reboot. She's confident, skilled, and acrobatic. The human characters have skills that mirror each other, and the two gods are the same way. Both she and Carter use small firearms (Lara has her signature twin pistols while Carter uses a revolver), and the two gods use a staff of Osiris to fire blue laser beams. Lara and Carter's secondary ability is to fire a grappling hook to scale walls and pull up their companions. There's also a nice trick where the grappling line can be used as a tightrope for players to walk across. The two gods' secondary abilities include creating a protective energy bubble around themselves. This shield can be used by Lara and Carter as jumping off points to reach different areas. Additionally, the staff can be used to interact with objects that have glyphs, which includes raising and lowering platforms.

If players grow tired of the standard weapons, pickup weapons like the assault rifle and shotguns can be equipped and used by all. Furthermore, characters can equip rings and amulets to add bonus skills, but the amulets sometimes have a downside as a trade-off. Special items are purchased using gems that are liberally scattered throughout the world. However, the gems are not shared between the characters, so there is some competition involved. Players are also working to complete different challenges like collecting red skulls. The Temple of Osiris supports drop-in/drop-out multiplayer, and can mix between online and couch co-op. Levels reconfigure themselves according to how many players are in the game. 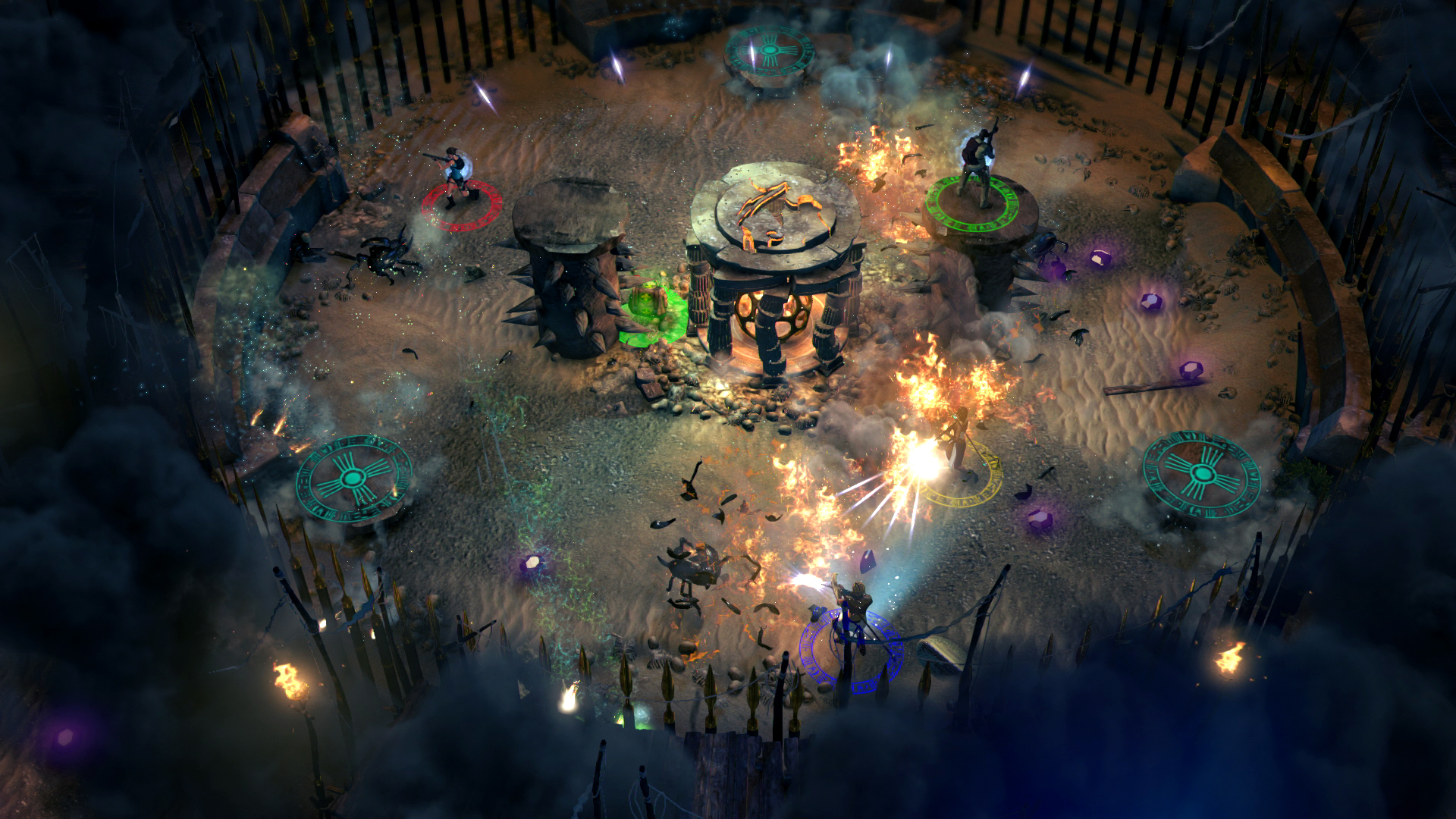 Revealed for the first time at this year's New York Comic Con was the fact that the game supports an overworld that connects all the tombs together. There's a central hub where players can restock on ammunition, pick a tomb, and head towards it. If you're unsure where to go, using the staff will cause various statues to point the way for you. The overworld map looks pretty expansive, and the developers promise that more tombs will be added to it as future DLC is released.

Our first cooperative was to solve a short challenge tomb, and the four of us had to quickly make our way across floors equipped with sword trapped pressure panels and to stand on buttons to unlock a door. A couple were impaled along the way, but the respawn time is pretty fast and there doesn't appear to be a death penalty. After completing the challenge puzzle, we made our way to a large pit, where we were ambushed by undead minions and oversized beetles.

This is where the cooperative play can get a little chaotic. I played as Horus and mainly stuck to shooting a laser beam from my staff. Combat works like a twin stick shooter, where the left stick moves the character, the right stick aims the weapon, and holding down the right trigger fires continuously. Although my light beam cut down targets at a swift pace, I was limited to one enemy at a time, so getting overwhelmed is always an issue. It's also tough to keep the puzzle in mind while fighting for your life. In this case, the gods had to use the staff to raise a set of rotating platforms while another player uses them to leap onto a central pillar and plant a bomb. As it turns out, creatures get very upset when you try to blow their stuff up. Enemies of increasing number and difficulty starting popping out of the ground, including one type of scarab that leaves a fire trail as it skitters around.

Eventually, we won our hard-fought battle against the undead rolled a ball of caged light to another nearby pillar to unlock the door to the main tomb. Inside were a number of puzzles that required us to adjust a series of series of mirrors in order to aim the laser beams. The laser bounced off the mirrors to pierce a number of darkened orbs, which opened up the next stage. Environmental puzzles include finding our way over spike pits using the grappling lines. Soon we were in a new room with a new set of mirror puzzles, except this time we came under attack while trying to solve it. Some of the skeletons also carried a bullet-proof shield with a mirror-like finish. Shooting them head on didn't do any harm to them, so we had to dodge and roll to find a way to flank them or drop explosives in our wake. Perhaps that wouldn't have been too much of a problem if the floor of this didn't also have spike traps. More of my teammates were unexpectedly impaled, sometimes repeatedly, while fire scarabs burned their way though.

We were able to defeat them all and solve the room puzzle, which brought us to our first boss - a giant cobra that breathes fire. The large room has four pressure pads, and standing atop them raises mirrors. The mirrors also work as a shield to block against the snake's fire breath. The only way to defeat the serpent is to fire lasers through the dark energy orbs located on its body. The first one was pretty much a giveaway, as more orbs show up as the battle progresses, and you'll need to use the mirrors to hit them all. While you're busy trying to figure out basic geometry, more scarabs and shielded skeletons climb into the room to ruin your day. Amid the chaos, in a room so big with so much going on, it can be easy to lose track of your teammates and sometimes yourself. I can imagine a big challenge will be in trying to communicate with online players while everyone is trying to survive. 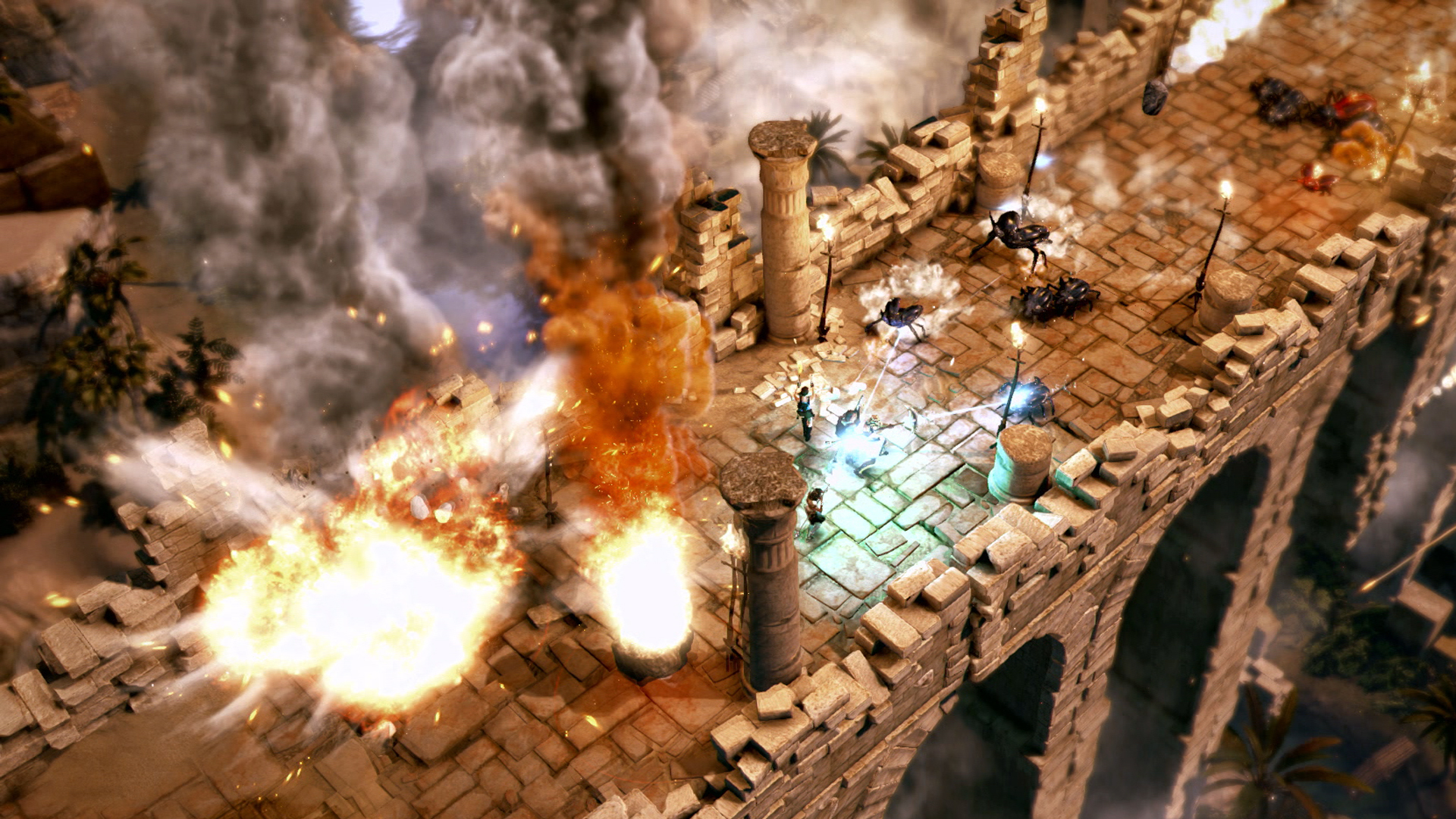 Defeating the giant cobra earns you a piece of Osiris's statue. In this case, it's a large golden fist that is automatically returned to the overworld hub. We make our way back and a doorway opens up for us. Inside is a large, room-sized, dial with day and night drawings on it. The piece of Osiris gave us the power to rotate the dial, which turns the overworld from eternal night to day. The developers informed us different states will impact the accessibility of tombs throughout the overworld. For example, there's a power that makes it rain, which I'm guessing may open up waterways.

Although the solving puzzles while fighting can get become chaotic and tricky when there are so many players around, I did have a fun time fighting the undead and solving puzzles. Plus, you get to play as a god that shoots laser beams, and you can never go wrong with that, right?

Lara Croft and the Temple of Osiris releases on December 9 for PC, Xbox One and PlayStation 4.