Bungie is one of the most successful game developers in the business, with a history spanning over 23 years. Founded in 1991 by Alex Seropian and Jason Jones, this company has gone from a two-man team developing 2D top-down games for the Mac to a company employing over 500 people to develop the current smash-hit Destiny. Bungie has consistently been on the money with generating games that have received critical acclaim and have gone down as some of the best games for their respective systems.

Although Bungie has released some games with settings as varied as the Isle of Crete, or a medieval fantasy world (Myth), its bread and butter has always been in the realm of science fiction. While Halo will probably always be remembered as the series that made Bungie a household name (with the Master Chief Collection releasing this fall), its first sci-fi shooter series, Marathon, was also a big hit when it came out. So, while you’re playing Destiny, why not take a few moments to appreciate one of Bungie’s greatest achievements? 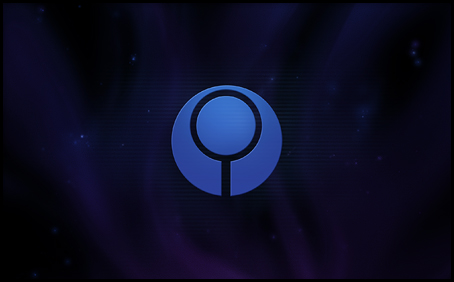 Marathon released in December 1994 for the Macintosh. It began as sequel to Pathways of Darkness, a game that Bungie had released the previous year that centered on stopping an ancient god from awakening and destroying the Earth, set in modern day Yucatan. However, the game quickly evolved into its own story as a futuristic first-person shooter. Marathon takes place in the year 2794 on-board the starship UESC Marathon. Players took on the role of a security chief in transit to the Marathon as an alien attack breaks out in the system. The player must work with an A.I., Leela, against an enigmatic alien race, the Pfhor.

The game introduced several new features that were revolutionary for the time. Unlike Doom or Wolfenstein, players could look up and down and pan side to side. The story is also unusually deep for an FPS of its time. Throughout the ship are terminals where players can learn about the history of the Marathon universe, and the plot is much more than the standard “You are here. You're good, they’re bad, now kill, kill, kill” story of its contemporaries. By incorporating concepts such as "rampancy," or the enhanced self-awareness of an AI, Marathon set the stage for tropes that would later be fully explored in the Halo trilogy through Cortana and other constructs in the Halo universe.

Though games like System Shock were exploring similar ideas at the time, Marathon put them into place first in a meaningful manner as far as storytelling goes. While the level-to-level happenings are much like any other first-person shooter, Marathon's placing the player in the hands of three AIs was an interesting twist upon other games in the genre, especially given the fact that the terminals the player can interface with are his primary means of plot development rather than completion of levels.

The game was also lauded for its multiplayer deathmatch mode, which had been a much-anticipated feature for some time after having been announced. It certainly didn't disappoint, later winning the Macworld Game Hall of Fame for the best network game of 1995. Marathon featured ten different multiplayer maps, with support for up to eight players on a single computer network, which was an impressive number at the time. It was a massive undertaking that Bungie planned on expanding even further, but did not, citing time constraints as the reason co-op play never made it into the final product. Fortunately, much of what wasn't included in the original Marathon would be included in the follow-up, Marathon 2: Durandal.

Marathon was a hit beyond Bungie’s wildest anticipation. Bungie was flooded by orders and actually had to hire another company just to handle the overflow. Although it received critical acclaim, the Mac gaming scene was small and tight-knit and the lack of a port to Windows meant that the majority of gamers would not be able to play it. The success of the game led to work on a sequel starting soon after its release. 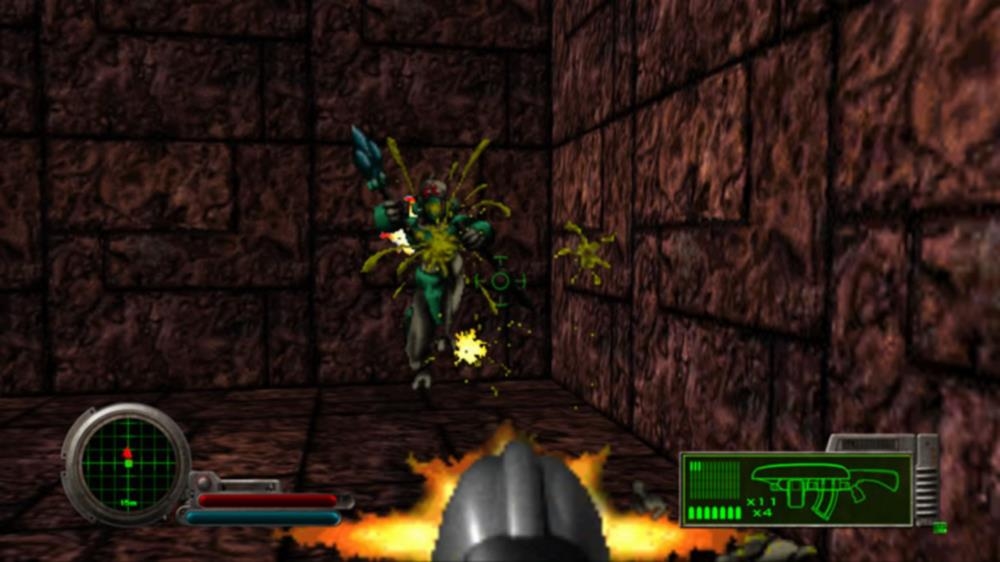 Marathon 2: Durandal picks up 17 years after the original game. The protagonist, the same security officer from the first game, along with a group of ex-colonists, is tasked with investigating the ruins of the planet Lh’owon, homeworld of the S’pht - a race that was subjugated by the Pfhor. The player must uncover the secrets of the Pfhor to halt an attack on Earth itself. The game featured many improvements to the original Marathon. It ran on an upgraded Marathon engine which allowed for greater visuals and a better interface. Sound was improved and featured more ambient sounds rather than relying on the static background music of the original. Multiplayer was expanded on and many modes were added. It also added co-op mode, which would find itself into many subsequent Bungie releases.

Marathon 2: Durandal sold even better than its predecessor, even though it was not as critically acclaimed. Instead of innovating, Durandal was seen as refining the formula that made the original so successful. Originally releasing on Mac in November 24,1995, the game was ported to Windows almost a year later. In attempting to reach out into the PC market Bungie alienated some of their fans. Some Mac aficionados felt betrayed that Bungie would not keep Marathon a Mac exclusive. 1996 would also see a port of Marathon and Marathon 2: Durandal released on the Apple Pippin, a console that never gained popularity and soon was pulled from stores. This port is super rare and info is scarce on how many copies were manufactured.

Fortunately, the port wasn’t the only way to get your hands on the game. It took several years, but interestingly enough, Marathon: Durandal found a home of its own via the Xbox Live Arcade back in 2007. A rather unlikely playground in which fans of the classic shooter would find themselves exploring. Developed by Freeverse Software, it supported 4-player split-screen play and up to 8-player support for online multiplayer via Xbox Live. It even received an additional map pack in the form of the Jjaro Map Pack, which collected 12 different multiplayer maps from the original Marathon and what would follow as the third game in the series, Marathon: Infinity.

Where Some Rarely Go 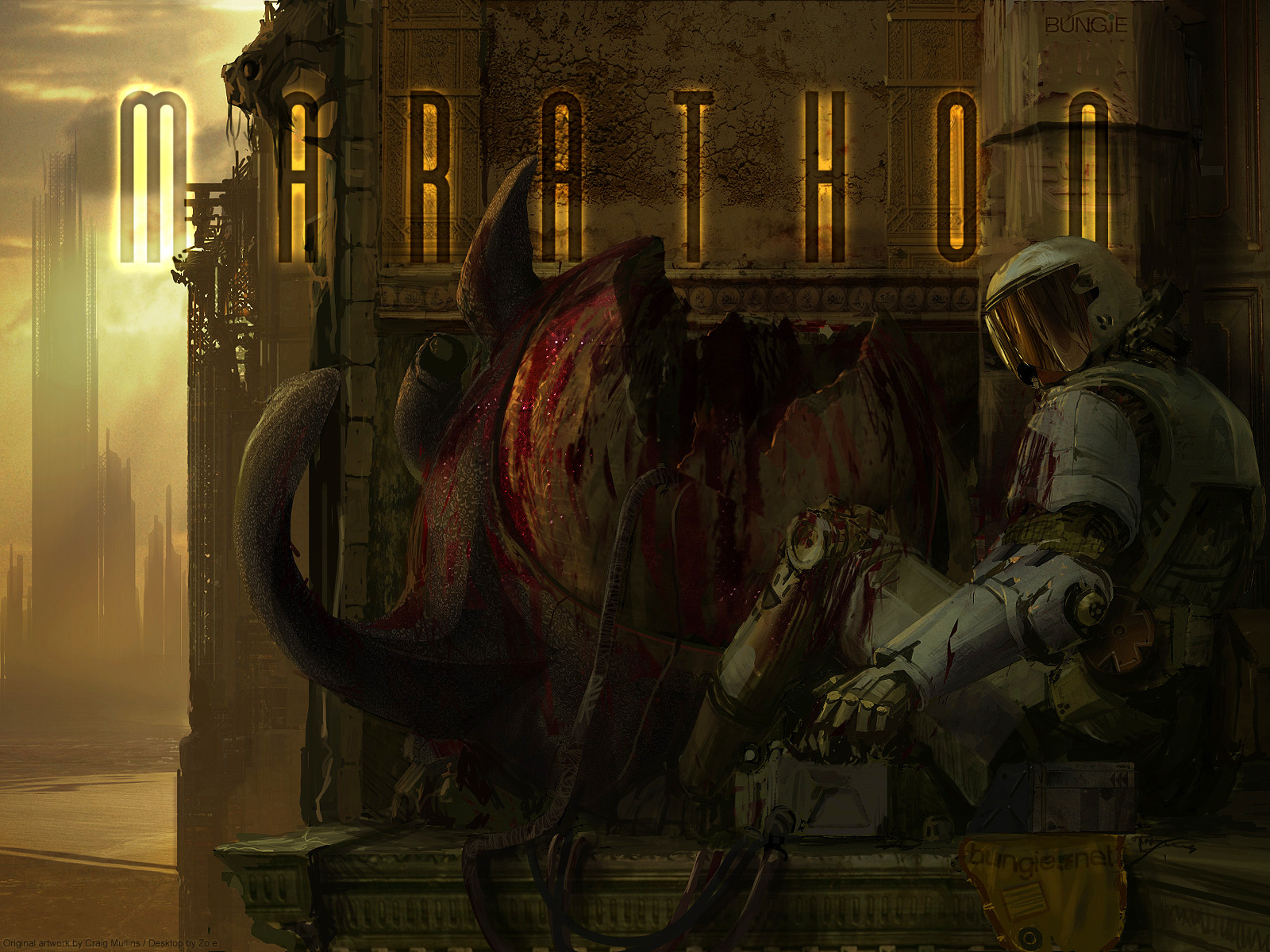 Marathon: Infinity released on October 15, 1996 and brought with it more levels than players had seen previously in Marathon 2: Durandal. It featured the most far-reaching story yet, spanning space and time, artificially retconning the narrative in Marathon as if Marathon 2: Durandal hadn't occurred. The player "jumps" back and forth between alternate realities that don't necessarily render the rest of the rich and expansive Marathon lore obsolete, but asks players to look at things another way. This includes taking up the role of AI Durandal's ally, then being taken to an existence where Durandal did not capture the player at the end of Marathon 2. With the constant bouncing between Durandal and the rampant AI Tycho, it can be quite difficult to follow, but those who decide to take the plunge and stick with it were treated to the most narrative-rich entry in the trilogy.

Along with a new branching storyline came the addition of a new weapon and a swath of new objectives, as well as the introduction of "vacuum" levels where players would lose oxygen at regular intervals until finally, they would die unless the oxygen supply was kept up regularly. Interestingly enough, Infinity also included Bungie's Forge, which allowed players to create their own levels using the very same tools Bungie used. Of course, we saw glimpses of this again later in Halo's life cycle, but it's important to remember where we came from.

Overall, fans were pleased with the alternative direction Marathon: Infinity found itself parading toward in both the narrative universe and gameplay realm, with reviewers at the time praising it for its willingness to break narrative convention and delving into a fictional world with a much more profound slant than anything before it within the Marathon universe. It's one of the most intricate tales of the Marathon series, with nonlinear levels and objectives to complete with the culmination of one ending rather than multiple. It’s widely considered to be one of the scarier titles of the trilogy. It may not be as popular as its predecessor in terms of the mainstream gaming community, but it’s every bit as worth playing, if not more.

Of course, the legacy still lives on despite Marathon: Infinity being the last official release in Bungie's science fiction trilogy. With the Aleph One open source project based on the source code for Marathon 2: Durandal, players continue to play with and enjoy the games. The project continues to maintain compatibility with current platforms and newer ones such as iOS. Now all three games, through Aleph One, can be played on Windows, Mac OS X, and Linux, and is easily accessible for new players to get into.

There's even a bevy of user-created scenarios and conversions to get lost in, with hundreds more available -- notably, Marathon: Rubicon X, which is widely considered to be the unofficial fourth game in the series by fans. You can grab all three of the original games for free via the Aleph One project, and then continue on with Marathon: Rubicon X for one awesome weekend full of first-person shooter goodness.

The next time you head out on a raid in Destiny, why not look to the past for an excellent game (and one that inspired the naming of my portfolio page PfhorTheWin.com)? Take some time out to appreciate the titles that came before if you haven't already. You may find yourself pleasantly surprised.