Hearthsone "Curse of Naxxramas" has opened up its fourth and penultimate wing, the Construct Quarter. This one includes four new bosses to defeat instead of the usual three, and as usual those Normal challenges should be doable for most players. The Heroic challenges, on the other hand, require some heavy strategizing to solve the combat puzzles. We've fought our way through the Construct Quarter and come out in one piece, so here's what we've picked up on how to make it through. 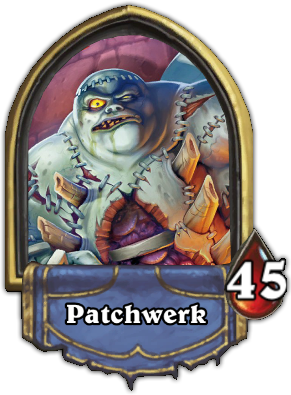 Patchwerk is one of the tougher bosses in the Construct Quarter, which may be surprising considering he doesn't have any cards. Unfortunately, he doesn't draw cards either, so you can't rely on Fatigue damage. His entire gimmick comes down to his weapon, a devastating 4/8 hook with Windfury and a Deathrattle that regenerates the weapon as a card he can play. Once he reaches 4 mana, he'll also regularly use his Hero Ability (since he doesn't have other cards to play anyway), so the combination of his weapon and ability can take out three minions very easily.

Your best bet against him is a Mage with a deck full of freeze spells and Taunts, but even then the first move is critical. Put two Swamp Oozes in your deck, and keep restarting and Mulliganing your cards until you get one. You automatically start second, which means you get hit for 8 damages right off the bat, but you can use your coin to instantly destroy the weapon and delay his attack another turn before he can play the card to get his weapon back. It's invaluable.

After that, keep freezing him as much as possible and using cheap Taunt minions. More expensive ones aren't worth it, because by the time you can play them, he'll have enough mana to instantly kill them. The Mirror Image spell is a good bet, and Sorcerer's Apprentice will help you pump out spells much faster. Ideally, you'll stall him until you get a Water Elemental behind some Taunts. His Hero Power will hit the Taunts first, so as long as you keep putting up at least one Taunt, the Water Elemental can keep freezing him to keep him from using his weapon.

This is also a match where Mad Scientist can come in handy. Load your deck with some emergency secrets like Ice Barrier and Ice Block to have them triggered more with the Mad Scientist Deathrattle. The Duplicate secret can be helpful too, since killing your Mirror Image will mean you get two more Taunts for cheap. 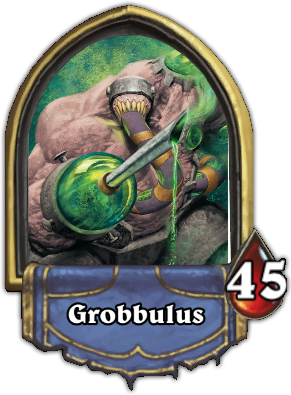 (Auto) 0 mana deals 2 damage to all enemies, summons a slime if any die

Grobbulus is all about making the new Stoneskin Gargoyle card useful, so hopefully you invested in the Plague Quarter. Play a Priest with the Gargoyle and plenty of buffs in your deck. Divine Spirit and Power Word: Shield are must-haves, along with Inner Fire. The first three turns will be all about healing yourself, staving off damage, and playing cards like Acolyte of Pain to increase your card draw.

Once you hit turn four or five, depending on your hand, play the Gargoyle along with one of the buffs. Don't rush him out on turn three, or Grobby will just kill him immediately with a combo of his Hero Power and another attack. The buff puts him out of death range. Grobbulus' minions will ignore your Gargoyle because he's not a threat, so you can take your time keeping yourself healthy before the big play.

Once you're ready, buff him with more Divine Spirits and an Inner Fire to make your Gargoyle a force to be reckoned with. Stick a Sunfury Protector or Defender of Argus next to him, and he's an absolute wrecking ball. Grobbulus' minions will throw themselves at him, but his health should be so absurdly high that he won't die, and then he'll just heal himself fully when your turn starts. 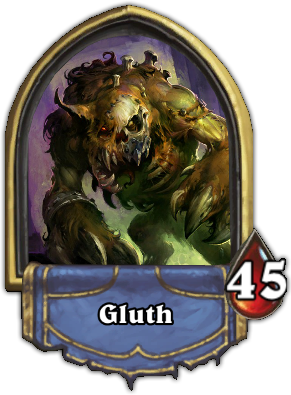 (Auto) 0 mana changes the health of all minions to 1

Gluth's hero ability means your minions are extremely vulnerable all the time, but this can be overcome easily enough. Play a Paladin and insert as many minions with Divine Shields as you can. Spells like Hand of Protection or minions like Argent Protector will let you put protection back on your other minions after you pop the bubble to take down an enemy. Pack some buffing spells too, but don't bother with Blessing of Kings since half of its effect will be negated.

One of Gluth's most dangerous abilities is his weapon, Jaws, which gains +2 attack every time a minion with Deathrattle is killed. He'll be constantly putting out Deathrattle minions sacrificing them, so it's easy for his weapon to get out of hand. He'll also sometimes play Enrage, which gives him +6 attack too. Be sure you pack an Ooze or two (or Harrison Jones, if you have one) to break his weapon before he gets the chance to buff it. 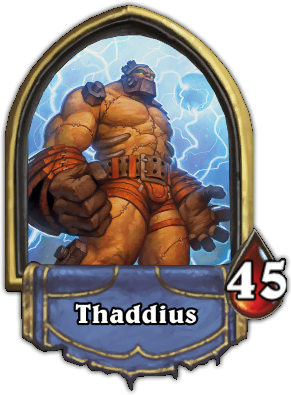 (Auto) 0 mana swaps the health and attack of all minions

Believe it or not, Thaddius is surprisingly easy for a Heroic quest. Your best bet is a mid-range deck with lots of minions that have similar health and attack stats. His Hero Ability impacts his own minions as well, so just plan ahead as you play your minions to figure out how their stats will compare.

He'll have a Feugen and Stalagg out from the start, and you'll want to take them both down quickly. This is easier than it seems, because playing a Nerubian Egg will mean you get an instant 4/4 after his Hero Power swaps its health to 0. That will be enough to take out whichever one has had its health switched to 4, and you can use a Big Game Hunter to take out the other since it will have 7 attack.

Perhaps most helpfully, his Feugen and Stalagg don't trigger another Thaddius minion, but they do work in conjunction with yours. Pack them both in your deck. Since you'll have taken out both of his, either one will trigger Thaddius on your side, letting you beat this boss with himself.

Did you survive of the Heroic Construct Quarter with your own deck strategy? Let us know in Chatty!