Lara Croft and the Temple of Osiris Gold Edition announced

When we played Lara Croft and the Temple of Osiris a couple of weeks ago at San Diego Comic-Con, we found it to be a superb sequel to the 2010 release, Guardian of Light, complete with four-player co-op and surprises around every turn. Today, Square Enix presented the option to own a physical version of the game, along with a few rewards for good measure.

The Lara Croft and the Temple of Osiris Gold Edition will come with a physical copy for either the PlayStation 4 or PC (sorry, Xbox One owners, you're digital only), along with access to a Season Pass that will feature yet-unrevealed downloadable content, an overworld map that shows you the entire game world, a collectible art book featuring drawings of heroes and enemies in the game, and, best of all, an adorable little 3-inch mini Lara figurine. 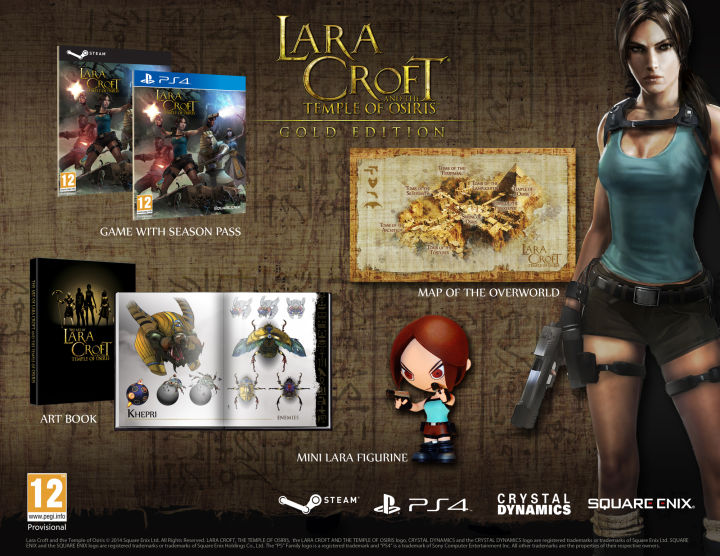 Square Enix also announced pre-order bonuses for the game through three different retailers. Those who buy it on Steam will receive a special Hitman pack, featuring skins from the popular series, along with a Silverball weapon and The Agent ring, which grants increased weapon damage and stronger bombs.

Amazon will offer the Deus Ex pack, featuring Adam Jensen's combat rifle and the Augment ring, with a reduced price on treasure chests.

Finally, GameStop will get all nostalgic with the Tomb Raider Legend pack, featuring classic Lara skins, a golden pistol and The Legend ring, with health regeneration and a stronger torch.

There's no word yet on how much the package will cost, but more details could be forthcoming next week at Gamescom.

Lara Croft and the Temple of Osiris will release on December 9th for PlayStation 4, Xbox One and PC.