Hearthsone "Curse of Naxxramas" has opened up its second wing, the Plague Quarter. With it comes three new bosses to defeat, and once again they shouldn't prove too much of a struggle for experienced players. The Heroic challenges, on the other hand, require some heavy strategizing to solve the combat puzzles. We've walked through the Plague Quarter and survived, just so we can offer more tips on how to stave off death in the dangerous new territory. 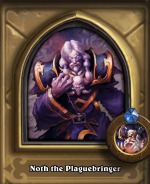 Noth can be a real pain, thanks to his power that forces your own minions to work against you by being fodder for his stream of 5/5 skeletons. Running a cheap aggro deck will result in certain defeat, as he'll just keep knocking down your minions to fill his battlefield. The best solution is to avoid cheap minions altogether. Instead, rely on spell-based control to keep the enemy in check while you wait for the late-game to roll out your heavy hitters with more health.

A Miracle Rogue can work wonders if you have the right cards, but otherwise, you can rely on the fairly easy and cheap frost mage build. Having freezing effects will keep the minions at bay, and a few spells like Fireball and Polymorph are good for mopping up any that you missed. If you can play the Ice Block secret early, it's a good combination with Etherial Arcanist since it will gain attack and health every turn until the secret is triggered. Having a Counterspell is handy for avoiding Noth's board wipes.

Once you've sufficiently delayed his skeleton onslaught, you can start to let loose with higher powered minions that won't go down so easily. As long as you're playing at least one per turn, he'll have to sacrifice two skeletons to take down one of your minions, which is a bad trade on his part. Keep a Pyroblast around to finish him off, since when backed into a corner he tends to roll out Taunts. 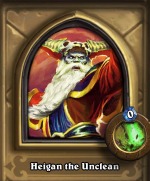 Heigan might be the toughest of this set, but his Hero Power is a pretty clever twist on the game. It emphasizes board positioning, and with a little planning you can take advantage of how predictably he uses it. Cards like the Nerubian Egg and Haunted Creeper can freely be put in the left-most spot with assurance that you'll get some benefit out of it. Your newfound Stoneskin Gargoyle can be excellent in the left spot to soak up the damage and self-heal every time, especially if paired with a Blood Imp or Young Priestess to buff his health.

The Gurubashi Berserker can act as a major damage dealer, thanks to the damage boost from getting hit. Just be sure you're ready with something to put next to him, because he'll only survive a few hits. Alternatively, you could constantly heal him with Priest powers or Earthen Ring Farseers, to make him power up exponentially.

Heigan summons demons by the bucketload, though, so a Warlock is really a better choice than a Priest. Fill up your deck with any spells that do heavy damage, and ones that instantly destroy demons. His use of Voidcallers can be frustrating to say the least, but that also means that he'll run through his minions faster. If you successfully control the board, he'll eventually be left without any demons to summon, and his two or three Blood Imps will just uselessly pass their life buffs onto each other while you finish him off. 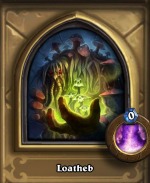 It may seem counter-intuitive, but the grand finale of the Plague Quarter is actually the easiest of the bunch. Just like in the Normal mode, Loatheb supplies you with the tools to beat him in the form of Spores. These little 0/1 minions can be summoned in a few different ways, but the payoff for killing them is a +8 attack boost to all your minions.

Clearly, then, an aggressive deck with lots of minions is the way to go, so your spore-powered boosts can overcome his staggering 99 health. His Hero Power, however, means you have to be on-guard. He'll use it every turn because there's no drawback for it whatsoever, so healing is a must. Minions like Earthen Ring Farseer and Voodoo Doctor will help mitigate the damage. If you're running a Priest deck, which is recommended, try to heal yourself as often as possible too.

From there, it's all a matter of balancing the rush for his face with controlling the board. Your minions will probably be cheap with low health, which puts you at risk of his 1 damage AEO attack. As long as you have a few that survive it, though, you can take advantage of the resulting spore. For this reason, it's useful to have some high-health, low-attack minions, since their attack will be boosted anyway. Mass-producing minions like Haunted Creeper are handy, and ones that have damage-dealing battlecries like Elven Archer are useful for activating the spores. Plus this is another opportunity to use your Stoneskin Gargoyle, since it will heal every turn and benefit from the damage boost to boot.

Did you survive of the Heroic Plague Quarter with your own deck strategy? Let us know in Chatty!