Completing Hearthstone's Arachnid Quarter, the first part of the Curse of Naxxramas expansion, is simple enough for most seasoned players. Finishing Heroic, on the other hand, can be a real struggle. The combination of overpowered boss abilities and a bloated 45 health make each of the three bosses much more formidable than in their Normal incarnations.

For the most part, you can approach these bosses in one of two ways. The inflated health bar means that Alexstrasza is an obvious choice, giving you a chance to instantly reduce their health to 15 as long as you can hold out until you have nine mana. Pairing him with a control deck--that is, one that emphasizes controlling the battlefield by eliminating threats--is a good way to take them on by stalling the battle until you reach turn 9.

Given that Alex is a Legendary and rare by definition, though, that isn't always a realistic suggestion. You might not have him, and you might not have the dust to craft him. The path to beating these bosses without a pet legendary dragon is a bit harder, but still very doable. Keep in mind that these are essentially combat puzzles. They're not meant to be fair, they're meant to make you think about your deck options in new ways. 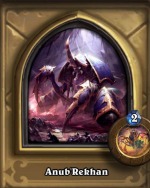 If you have Alexstrasza, load up your deck with control features. A Mage is particularly handy, with freezing spells to keep the hordes of spiders at bay. Otherwise, a Druid with Innervates can get your dragon out early enough to turn the tide, or you can go armor and Taunt heavy with a Warrior. The Mage is most recommended, though, since a turn 9 Alex will nicely set you up for a turn 10 Pyroblast.

Without Alex, a sufficient zoo deck with plenty of Taunts should annoy him into inactivity. His constant stream of 4/4s will have to keep contending with your Taunts while you're free to hit him in the face. Make sure to have some high-level removal options as well, like Claw or Consecrate for groups or Polymorph and Hex for big bads. 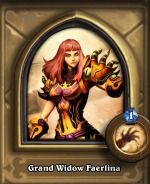 1 mana fires a missile for each card in your hand

Faerlina's power makes an Alex-based deck tricky, because the heavy card draw that you might rely on for control and getting Alex out can work against you. It's still a viable strategy if you're careful and shed cards regularly, but this is the one Arachnid Qaurter battle where the dragon isn't as helpful as the others.

Instead, your best bet is a rush or "zoo" deck, with lots of low-cost minions you can put out regularly to reduce the risk of her power. Some might get taken down by her power, but cards like the Leper Gnome, or new Naxxramas cards like the Nerubian Egg and Haunted Creeper can make her power work for you. Alternately, you could use a Warrior control deck with a pair of Armorsmiths. As long as you get them both out early, a lot of that small ping damage will go towards buffing you. Between their ability, Shield Block cards, and the armor Hero ability, you can easily get at least 15 armor and effectively match her health level. 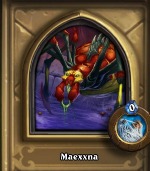 Maexxna is wonderfully predictable. She will always use her hero ability right off the bat, and almost always attack your face instead of sacrificing a minion.

This is another boss where a control Mage with Alex can serve you well, if you use it right. Maexxna has a tendency to fill the board with 1 damage minions, but they can pack a punch since it's so difficult to get anyone out for an attack. Freezing them in place with Mage spells can sufficiently stall the death by a thousand cuts until you can summon Alexstrasza to finish the job. Putting a few cheap healers like Voodoo Doctor and Earthen Ring Farseer will help too, since Maexxna's hero ability means you'll be able to summon them over and over again.

If you don't have Alex, though, this battle becomes much more about Charge minions who can attack before they're exiled, and then brought back out to attack again. You can pull this strategy off with any class, but the Hunter is the easiest way to fill the field with Charge creatures. If you can use an Explosive Trap early, chances are the Haunted Creepers will turn into a field chock full of Spectral Spiders. That will effectively clog Maexxna's board, but assure 7 damage to the face each turn.

Summoning Unleash the Hounds will give you your own 7 damage skill, and pairing it with a damage booster like Timber Wolf will make them a formidable pack. Maexxna's hero ability might send some individial pups back, but that's actually beneficial because you can swap them out for more powerful Charge beasts as necessary. Eventually she'll wise up and start going after your hounds, but by then it should be too late to turn the tide and another good Charge-heavy round will finish her off. A big Charge minion like Leeroy Jenkins or King Krusher is helpful for this strategy if you have them, to finish the job.

Do you have your own strategies for the Heroic Arachnid Quarter? Let us know in Chatty!