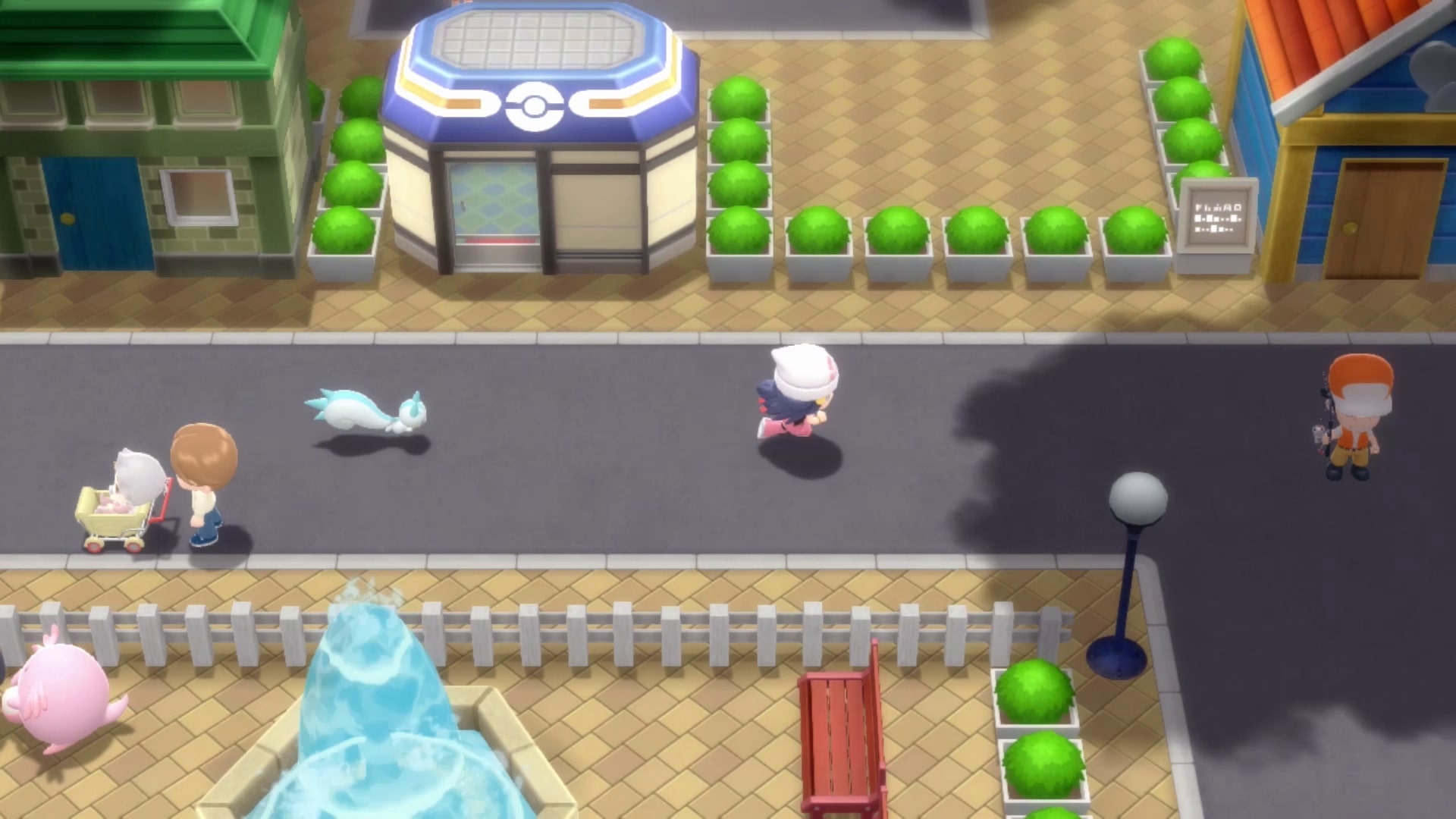 Pokemon Diamond and Pearl hold a significance in the franchise for a couple of reasons. Not only did they mark the beginning of Generation 4, but they were also the first Pokemon games released for the Nintendo DS, adding all new ways to play with the system’s touch-screen functionality. 15 years later, Diamond and Pearl are receiving new remakes for the Nintendo Switch. I had the chance to take an early look at Pokemon Brilliant Diamond and Shining Pearl ahead of their launch this November.

As with the original games, Pokemon Brilliant Diamond and Shining Pearl are set in the Sinnoh region, which is known for its mountainous and wintery regions. During my early look at the game, it was explained to me that BD/SP are practically 1:1 remakes of the original games, with identical characters, locations, and story. Of course, there is a full visual overhaul, with all of the environments and designs being remade in 3D.

I got to see a few locations around the map, including Route 208 and Hearthome City. Pretty much every aspect of these locations, down to the trainers and other NPCs, is identical to the original games. Diamond and Pearl were the first to introduce 3D design to the mainline Pokemon series, and it was nice to see the region and its inhabitants fully realized in 3D on a modern console.

This new design approach also applies to the Pokemon themselves. Sprites are no more, as Pokemon are fully 3D animated in battle, similar to how they are in Pokemon Sword and Shield. It was neat seeing some of my favorites, like Chimchar and Starly, in the new style. There’s also been an update to the visualization of status effects during battles. When a sandstorm is kicked up, the effect will persist throughout the battle until it subsides, rather than just popping up to inflict damage, as it did in older games. The same goes for effects like Poison and Burn.

Although Pokemon Brilliant Diamond and Shining Pearl are nearly identical remakes of the original titles, there are several new added features, both big and small. One major change removes Hidden Machines (HMs) from the game. Players will no longer need to waste a slot in their Pokemon’s move set with Rock Smash, Cut, or any other weak move that serves to cross obstacles in the overworld. Instead, they’ll summon a wild Pokemon to come to their aid. This is done through a new app on the Poketech, the smart watch device that makes its return from the original games.

Pokemon BD/SP also does away with the Exp. Share item in favor of a built-in mechanic that shares Exp. with all pokemon in the party. The Pokemon that actually participates in battle will receive more Exp. than those that did not. Another quality-of-life change allows players to access their Pokemon Boxes from anywhere in the world, without having to visit a PC at a Pokemon Center. The Pokemon series has seen a lot of growth since 2006, and the new remakes put Diamond and Pearl more in line with recent entries in the franchise.

A cool new feature in Brilliant Diamond and Shining Pearl - and one that we’ve seen in a handful of other mainline games at this point - is the ability to walk with your Pokemon outside of its Pokeball. Players can select one Pokemon from their party that will follow them around in the overworld, with each Pokemon having its own unique movement animations. In the original games, this was only available while in Amity Square. When players return to Amity Square in BD/SP, they’ll be able to have their full party out of their Pokeballs at once, all running around the park behind the trainer.

Down in the underground

The Underground and Secret Bases were a major aspect of Pokemon Diamond and Pearl, and make their return in the remakes in a big way. Players will once again be able to explore the vast network of tunnels that lie below the Sinnoh region, collecting treasures and designing their Secret Bases. When players are customizing their Secret Base, they’ll be able to decorate it with Pokemon statues, which ties into a brand new aspect of the Grand Underground.

In addition to meeting people and visiting bases, players will be able to discover Pokemon Hideaways when adventuring through the Grand Underground. These Hideaways feature wild Pokemon that players may not necessarily encounter up on the surface. Hideaways are themed around different Pokemon types, and their discoverability is dependent on what type of statues players put in their Secret Base.

Pokemon Brilliant Diamond and Shining Pearl are looking to deliver everything that made the original games so special 15 years ago. Though the games are indeed faithful remakes, new features and quality of life changes will hopefully make for a more convenient and streamlined experience. We’ll have to wait until Pokemon Brilliant Diamond and Shining Pearl launch exclusively for the Switch on November 19 to revisit the Sinnoh region and see all that it has to offer.