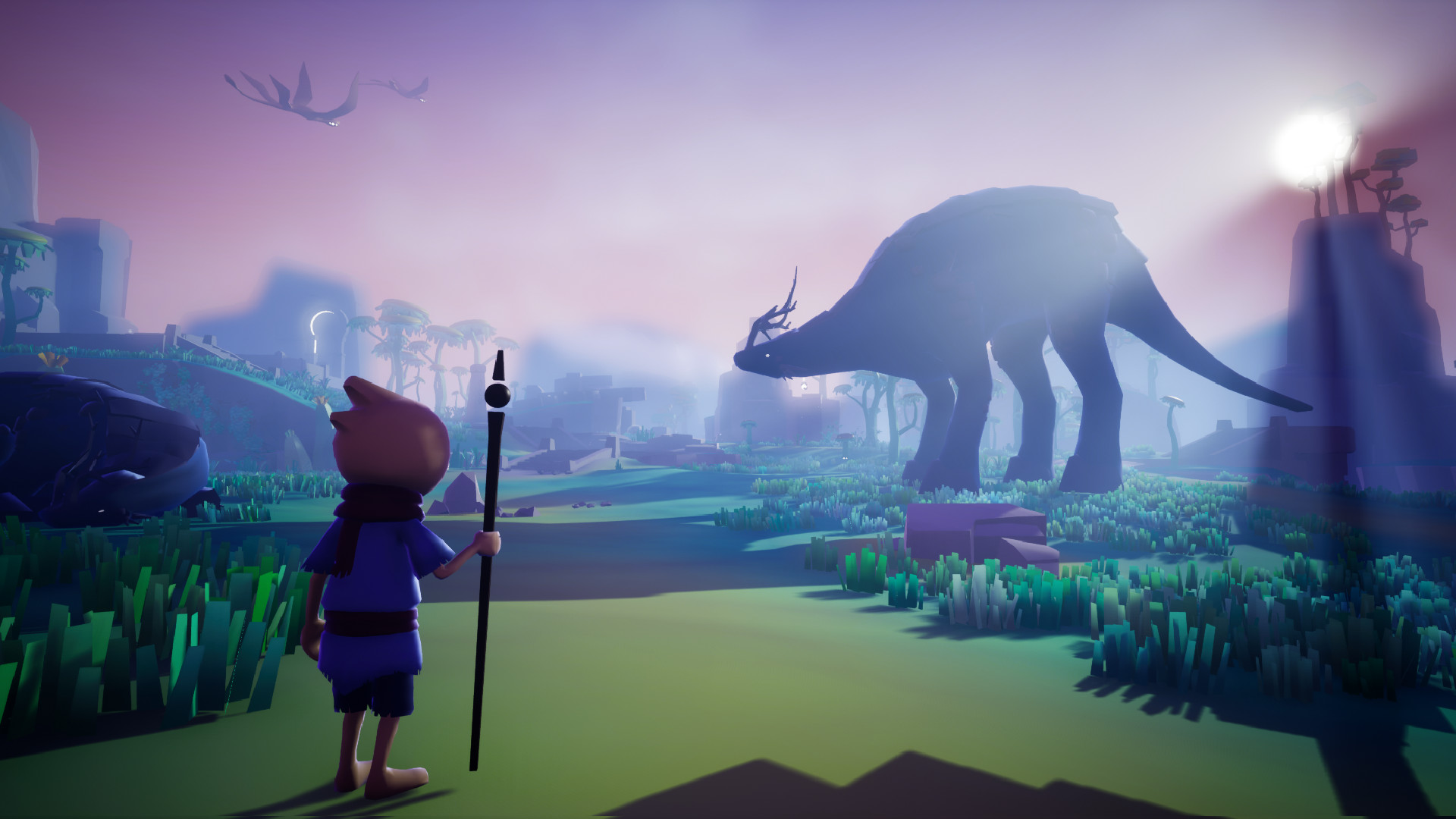 It’s easy to underestimate the work that goes into creating even the simplest of video games. That work is amplified when the team behind it is incredibly small. This is the case with StudioInkyfox, a German studio composed of one person, Jonas Manke. StudioInkyfox’s new game Omno, is an adventure that’s been in development since 2016. It’s a peaceful yet engaging adventure through a mystical land.

Remnants of a lost civilization

Omno follows the story of a person that finds themself in a strange world. There’s not much setup or exposition given, as clues are uncovered throughout the journey. It’s this laid-back approach that I really appreciated about Omno. The game could have very easily overloaded you with information about its ancient settings or all of the weird creatures roaming around. Instead, players are allowed to just soak it all up and let the environment tell the story.

As players make their way through the world of Omno, there are some fascinating discoveries to be made. From structures and relics of a lost civilization, to an assortment of different creatures, I felt compelled to explore every inch of an area before moving on to the next.

Omno’s core gameplay revolves around players gathering energy and using it to activate different pillars and beacons, which allow them to move forward to new locations. This energy is primarily collected from the animals and environments. It’s also where most of the puzzle elements come into play. The game will often ask players to solve obstacle-based puzzles in order to get more energy. I found most of the puzzles in Omno to be fairly clever, and the game was always clear on its rules.

To keep things fresh, there is also a good deal of platforming present in Omno. Players will often have to jump from pillar to pillar, and hop off the backs of animals. Though I liked the variety in gameplay, it was this element that fell a bit flat for me. The platforming didn’t feel very consistent, as I had a hard time perceiving depth and accurately predicting where my character would be when jumping around. This is likely due to a combination between the camera placement and the realistic casting of shadows.

When you’re not solving puzzles and gathering energy, there’s still plenty to do and see in Omno. The game features several distinct environments, from frozen tundras to dry deserts, each having their own unique style and design philosophy. A part of the joy was just roaming around the map to get a look at everything present in the world.

There’s also a bunch of creatures to find as players explore the ancient world of Omno. From crawly rock-like crabs to sentient plants, there are some bizarre creatures to meet in Omno. What’s really neat is that the game logs each creature you can encounter in a sort of Pokedex-style booklet. A tap of a button shows you a list of the creatures you’ve discovered, allowing you to view its 3D model and read a brief description of it.

Omno’s serene atmosphere is bolstered by some wonderful music. Composed by Benedict Nichols, the music in Omno reinforces the game’s overall peaceful vibe. It also gives a further sense of identity to all of the different locations and environments.

Omno is an incredibly peaceful yet thoughtful adventure through the remnants of a lost civilization. The inviting nature of it all, coupled with the world’s diversity and vast array of creatures makes it one worth exploring. Though I had some issues with platforming, there’s enough there to make Omno quite an enjoyable experience.

This review is based on a digital Steam code provided by the publisher. Omno is available now on PC, Xbox, and PlayStation for $18.99 USD.