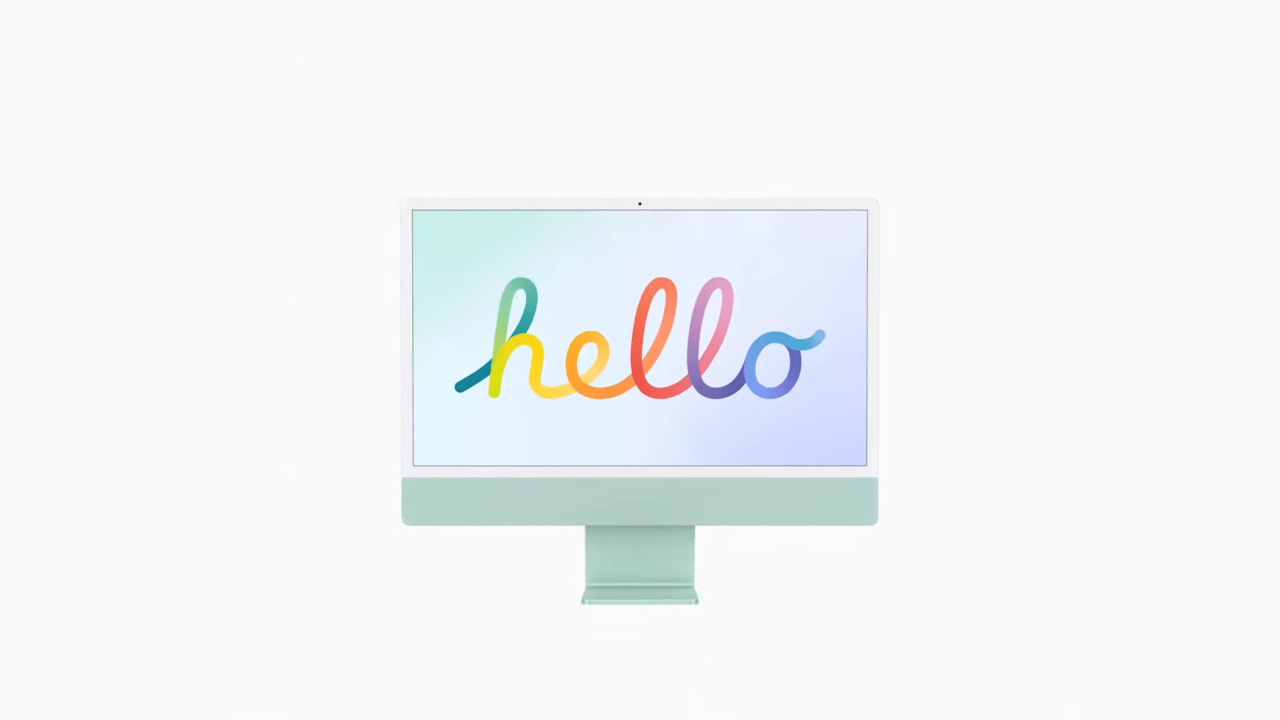 More hardware announcements have been made at the Apple Spring Loaded Event on April 20, 2021. A colorful new line of iMacs equipped with the Apple M1 chipset is slated for the second half of May with pre-orders starting on April 30 at two price points, $1299 and $1499. The history of the iMac is proudly on display with these new thin and vibrant all-in-one Apple computers.

With a total of seven colors available, Apple is bringing back the iMac nostalgia with a new set of desktops that are designed to remove the computer from the equation. Sporting an 11.5mm thick milled aluminum case that houses a 24-inch 4.5k Retina display, the new line of M1-based iMacs take full advantage of Apple's new chipset. The display is rated to support the DCI-P3 color space with 500 nits of true brightness. Not content with being smaller by 50 percent volume, the new iMacs are quiet, with under 10dB of operating noise.

Also encased in the new iMac is an HD camera and "studio-quality" microphone combination for improved video calls, streaming, or content creation. The 1080p FaceTime HD camera has a larger sensor that is said to be great in low light with hardware processing provided by the M1 chipset. Sound recording is handled by a three-microphone array that has beamforming and noise reduction. The built-in speakers are capable of spatial audio and Dolby Atmos with six speakers total including two force-canceling woofers.

Other accessories will be limited to the two standard Thunderbolt ports but two USB 3 ports are included on the more expensive model. In order to keep wiring to a minimum, a new wireless Magic Keyboard with function buttons and Magic Mouse are also part of the package. If you decide to pay up for those extra ports, a wireless Magic Keyboard with Touch ID is generously provided, allowing for convenient security features. The magnetic power cord leads to an external power brick that also contains Ethernet on the $1499 model, making the $1299 version WiFi only.

Apple made bold claims with the debut of this new M1-based line of iMacs. Slides proclaiming an 85 percent faster CPU and twice the GPU performance were very vague offering no actual comparison in the classic Apple fashion. Supposedly 50 percent faster than some unknown previous 21.5 inch iMac, it seems these are low bars that are being overcome, but early M1 device reviews have been favorable. Along with the rest of Apple's new hardware, the M1-based iMac is built to the company's environmental standards.

The actual specs for this new line of iMacs are an 8-core CPU and 7-core GPU with 8GB of unified memory. Storage is handled by a 256GB SSD with two Thunderbolt ports for expansion or accessories. A new Magic Keyboard and Magic Mouse are included for a package totaling $1299 with a choice of four colors. For $1499, the color choices are expanded to the full seven, the GPU gets a slight bump to 8 cores, with two extra USB 3 ports, the Magic Keyboard with Touch ID, and ethernet connectivity included. A release window has been set for the second half of May and pre-orders start April 30, 2021.

For more on the new iMac with M1 chipset, the Apple store page is already up with more details. Keep a tab open on our Apple Spring Loaded topic page for the biggest announcements from the event.