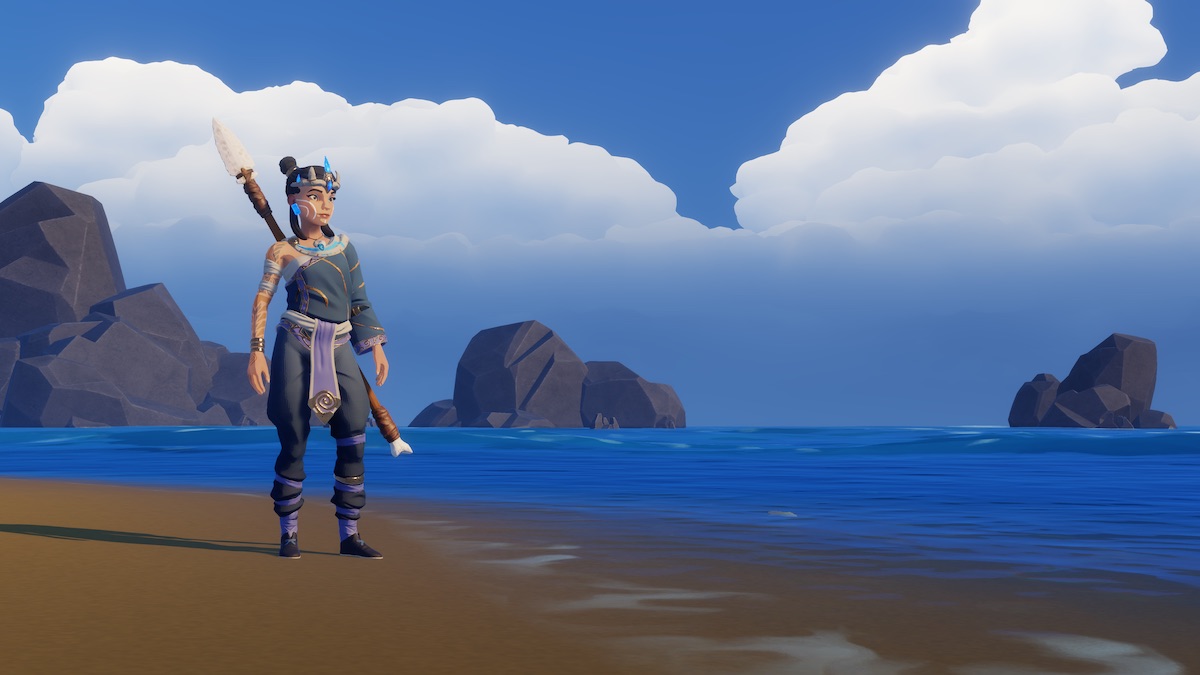 When you find that perfect adventure game that effortlessly melds exploration with survival, it's hard to set your sights on another game without wondering if it'll be able to top the last journey you went on. I wondered that with Windbound, 5 Lives Studios' single-player survival epic that looked to meld the aesthetic of The Legend of Zelda with the survival elements of games like Raft or Rust.

Naturally, I had to find out as I jumped in early for a hands-on preview that took me from the beginning of the game to a point later on in the odyssey that would end up even further wowing me. Near the end of my trek through this gorgeous, multi-hued world, I knew I had stumbled upon something great, and I'm excited to tear back into it when the full game debuts.

Windbound follows a young warrior named Kara as she makes her way through an effectively deserted area of the otherwise picturesque Forbidden Islands. With no food or supplies at her disposal, Kara must work to feed and protect herself as she works to better her situation. You've heard this song and dance several times before, of course, but thankfully Windbound's execution pushes you to want to know more.

At the beginning of the game, you can opt for two different routes: Storyteller or Survivalist. Choosing Survivalist means that death resets you at the beginning of the game with items retained in a certain segment of your inventory. Storyteller doesn't force you to lose progress through the story, makes combat a bit less difficult, and lets you keep the items you've collected. From there, you set off on your action-packed third-person adventure with nothing but your wits about you – you've got to craft other things and figure it all out on your own, minus the game's helpful tooltips.

There's more to the game than just seeking out crafting materials and trying to suss out a modest living on the island. There's also some intriguing bits of story mixed in, with a setting that practically begs you to go to the ends of the island looking for answers. For instance, what's going on with the strange bits that appear to be left behind from an ancient civilization here and there? Where did these strange creatures you must take on come from? These questions propel you to the next area and keep you running around to gather materials to press on, even when it feels a bit obtuse.

Combat is a satisfying mechanic on its own, and feels a lot like the kind you'd get into in a Zelda title. Kara has a wide variety of weapons at her disposal, including spears, knives, and bows to take out her enemies. It's exciting to slay monsters that you happen upon to see what you get from them, but these encounters also add some much-needed segments to break up the monotony.

Aside from exploration and combat, there's a satisfying sense of solitude in heading around the islands with Kara that feels refreshing. Though you're technically performing the same actions quite often, you never feel as though you're doing anything that feels repetitive. The land changes as you survey it, which helps to take away some of that potential boredom that could crop up that inevitably does in survival games.

Typically, I'll get a bit tired of looking for items to keep my characters functioning in similar games, and I'm not a fan of the "feeling" or "aesthetic" of The Legend of Zelda: Breath of the WIld, which is what this game does tend to remind me of. But I enjoyed all of the different elements coming together in Windbound and am looking forward to seeing more of it in due time.

Windbound is headed to PlayStation 4, Xbox One, Nintendo Switch, PC, and Stadia on August 28.