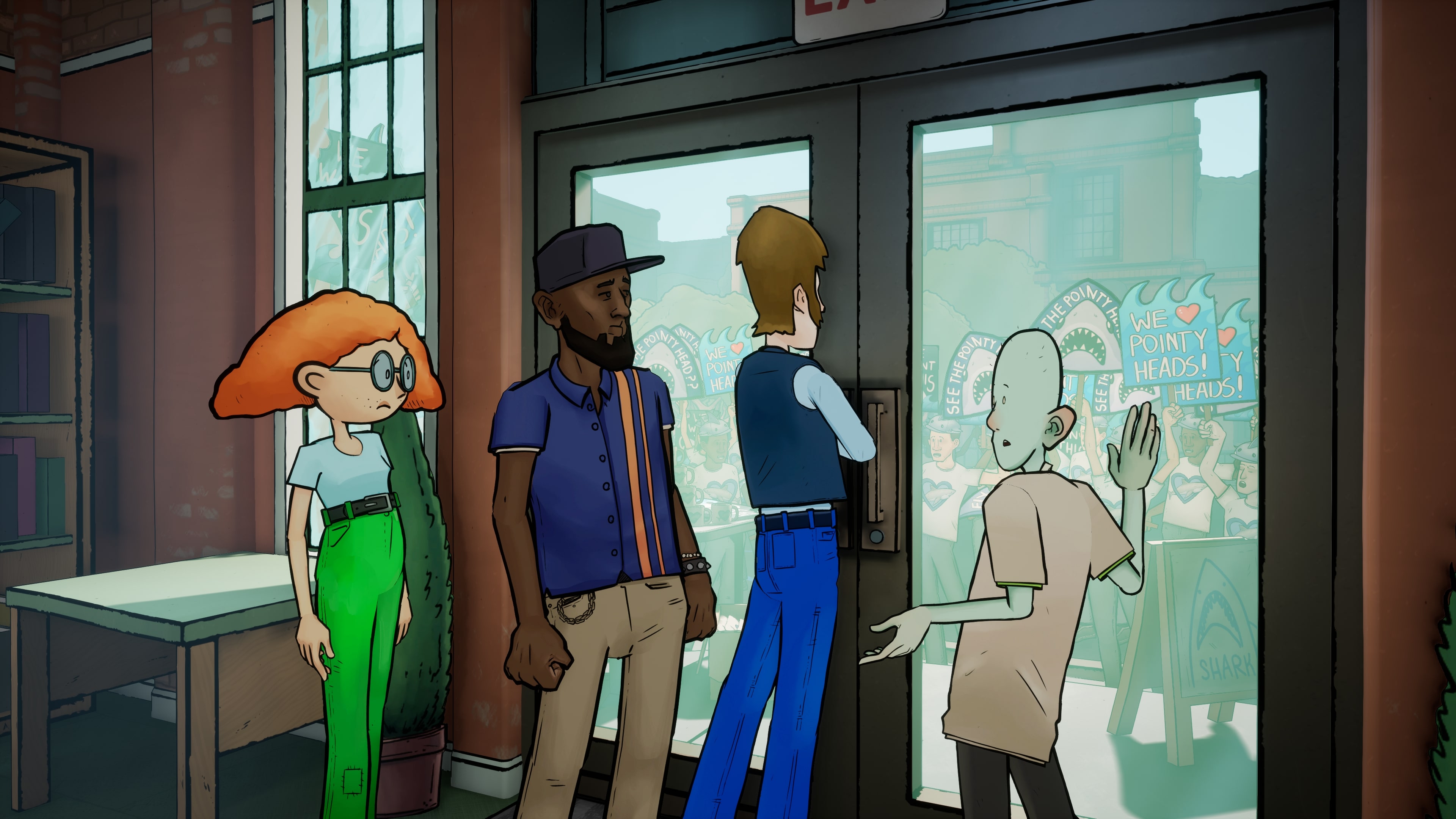 Terrible Posture’s latest project is a game that takes aim at gaming culture and the industry itself. Titled 3 out of 10, this game centers around what must be the world’s worst video game studio, Shovelworks. Never releasing a game that scored better than a 2 out of 10, we get to see the ins and outs of this highly-dysfunctional company. I got to speak with the developers behind 3 out of 10, as well as play the game for myself via a key to an early build of it on PC.

3 out of 10 describes itself as a “playable sitcom” and that’s exactly what it is. It felt like a program ripped right out of the late night showings on Adult Swim. The animation is beautiful, really lending itself to the television show vibe that the developer’s are going for. Players are meant to get just as much enjoyment from watching the fully fleshed out narrative of 3 out of 10, as well as playing its various minigames. The game even allows you to rewind cutscenes, as well as skip gameplay sequences entirely.

Speaking of the cutscenes, the cinematics in 3 out of 10 are all done in real-time and in-engine. This creates a seamless visual transition between gameplay and cutscenes. Before I played a single minute of 3 out of 10, I was already quite impressed by what Terrible Posture had created. The playable sitcom is full of hilarious moments, and some genuinely good jokes. With a focus on not only gaming culture, but an inside look at the people who make the games, and there’s plenty of humor to be pulled.

Further driving home the sense of a playable TV show, 3 out of 10 is being released in an episodic format, with new episodes hitting the Epic Games Store each week following launch. With the release of new episodes, players will notice both subtle and major changes to the game’s setting, indicating a passage of time. This includes a running joke about the studio’s Surfing with Sharks game constantly getting worse as they desperately try to improve it.

In the first episode of 3 out of 10, players play as Midge, a newcomer to Shovelworks following the sudden death of an employee. Midge, as well as the other main characters are excellently voiced, making them all feel unique. In future episodes, players will have the opportunity to play as other characters in 3 out of 10.

3 out of 10’s gameplay is composed of a series of miscellaneous minigames that cover different play styles from a variety of genres. From matching games, to driving challenges, to first-person sequences, there’s something for everybody here. There were a couple of minigames in 3 out of 10 that I didn’t care for. Luckily, the game allows you to just simply skip past them, with no penalization to your progress.

3 out of 10 is the latest iteration of episodic storytelling in gaming. Allowing players to replay and scrub through cutscenes and even skip gameplay segments entirely, 3 out of 10 knows where its focus is. With a story that’ll keep players coming back week after week, I look forward to seeing how this world evolves over time.