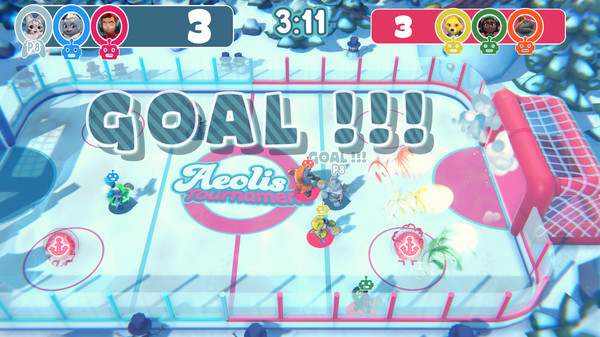 Each event in the tourney tries to take advantage of the air cannon your character holds. You’ll have to master how the vacuum sucks and blasts during each event. Air Hockey allows you to blow the puck towards the opposing goal whereas in Snowball Battle, you’ll be throwing snowballs at your opponents. Learning to master the different techniques of the vacuum will be key for victory!

Characters range from a muscular shark to a pirate to a wolf man; quite an interesting field to choose from. It allows you the option to customize your character by being able to purchase different colors and accessories to wear/hold. The better you do in matches, the more currency you’ll get to spend in the shop.

You’re presented with achievements to perform during matches, with each event/match having different goals to strive for. Winning without using the blaster or attacking a certain number of players are some of the goals/achievements presented to the player. The game has local play and online multiplayer but at the time of review, the online mode was unavailable. However, it has a pretty straightforward online setup where you can create a room to play in, join a random room or find a room one of your friends set up.

The game has two types of events, free-for-all and team battles. The free-for-all events are best player wins and the team battles pit a group of characters against each other. All the games utilize the vacuum that your character holds to attack and defend. It’s this simple gameplay mechanic that allows you to pick the game up and play right away as the controls don’t take too much mastering. That being said, the events available aren’t that varied and that takes a lot away from the game.

There are three team events and three free-for-all events to play. “The Perfect Storm” lets you take out some frustration with friends by blasting them off an island, with best score wins. “Sportsball” is Soccer where you’re trying to score in the opponent’s goal and “Air Hockey” is the same premise. The free-for-all events are the better games but when there are more players involved, it does get a little cluttered and hard to see what’s happening on screen. “Explosive Dodgeball” is a prime example of this as there are bombs getting thrown from one side of the court to the other. “Snowball Battle has players throwing snowballs at each other and my favorite, “Marble Thief” has the players gather marbles and put them into your goal. There appears to be more strategy in Marble Thief than the other games as you can collect large/small marbles as well as knock your opponents into the holes/goals for points. The court rotates as well so figuring out when to go for a marble and when to stay back will be key too!

Get the upper hand

There are power-ups strewn about the court that could be the advantage you need for victory. Better range/faster movements and stronger attacks are a few of the power-ups in battle. However, if there were more events to play, you could overlook two of them being Soccer and Air Hockey. With there being so few games and two of them basically the same game, the lack of variety can’t be overlooked.

As mentioned prior, you’ll be able to play a “quick-game” or a tournament, with up to eight players, using Switch Joycons in “Horizontal” mode. Simple rules in the matches allow for a timed match, high mark in points, or random for each match you play as well as changing the length of each match. Matches don’t last too long so you’ll be able to play quite a bit in one sitting. However, it’s that same reason as well as the lack of variety that will hinder the replay factor.

To recap, Aeolis Tournament is a fun, easy to pick up multiplayer game that pits friends against each other to determine the top spot. Players will enjoy the simple control scheme and short events. However, the lack of variety in the events will hinder the replay value of Aeolis Tournament, thus turning some players away.