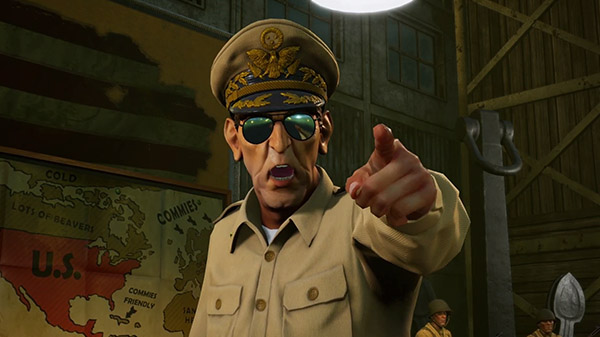 We aren't far out now from the release of Destroy All Humans, and we've had quite a few glimpses of the game since it was first announced.

It's a good thing, because there's a lot to take in. First off, the new trailer for Destroy All Humans! shows off the area of Union Town, just another area you'll be able to explore as you wreak havoc on the poor, unsuspecting humans as Krypto. In case you haven't guessed by now, he's not really a fan of humans or anything like that. But why would he be? We can't even figure out social distancing and staying inside to not get sick.

Looks like there's plenty of weirdness going on, mostly centered around keeping humans from trying to foil Crypto's plans. And we're good with that. Humanity could probably use some intervention from aliens to stop them from being so, well, insipid about things lately. I don't know. Maybe I'm jaded.

In case you haven't been keeping up with newsy tidbits about the game, which is headed to PlayStation 4, Xbox One, and PC, it's actually a reboot of the 2005 title that's dead-set on keeping the humor from the old game and giving it a bit of a modern twist. You'll get to take on the 1950s in a hilarious alien invasion story, all the while posing as humans while you work to infiltrate society and, well, destroy them all. Luckily, Crypto has plenty of ways to do this that he won't mind sharing with you.

Get ready for July 28 by making tons of tinfoil hats for everyone to wear. You're going to need them when Crypto invades, and we'll be right here to make sure you don't get beamed up and probed during the process. Also be sure to peep that collector's edition.